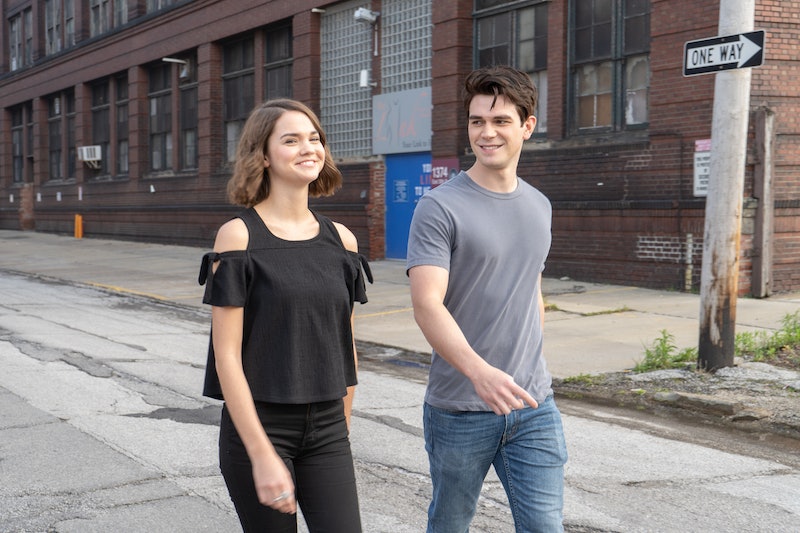 If you're already craving the weather, excursions, and romances that come with summer, Netflix has the original film for you. The Last Summer premieres on May 3, follows four high school friends trying to make the most of their last summer at home after their senior year. Griffin (KJ Apa), Phoebe (Maia Mitchell), Erin (Halston Sage), and Alec (Jacob Latimore) are all trying to figure out who they want to be, and as Griffin says in the trailer, and who they want to be with. The story seems all too familiar because a lot of us have been where the four main characters are, but beyond the film's nostalgia and relatability, is The Last Summer actually based on anything?

Let it be known, first of all, that Netflix's The Last Summer has nothing to do with either the British 2018 drama Last Summer, or the R-rated 1969 film of the same name. And though there's also a quartet of two girls and two guys involved, it's also completely unrelated to the 1997 thriller starring Ryan Philippe, Freddie Prinze Jr., Sarah Michelle Gellar, and Jennifer Love Hewitt called I Know What You Did Last Summer, though that would be an interesting and unlikely twist.

There are also a couple of books that carry the same title: a historical romance by Judith Kinghorn and the other novel by the bestselling author of The Sisterhood of the Traveling Pants, Ann Brashares. But neither of these novels are at all related to the film. The Last Summer comes from a screenplay co-written by director William Bindley and his brother Scott Bindley.

In the press notes, William Bindley explains the inspiration behind the film:

I grew up watching films like Fast Times at Ridgemont High and John Hughes movies, and I always wanted to do a coming-of-age film. Mike Karz and Wayne Rice had made a few ensemble movies and I started talking with Scott Bindley, my brother and co-writer, about doing something structured similarly to a Love Actually by intersecting storylines set in the summer after high school.

So though the characters and their adventures are not based n any existing source material, you may get a feel for movies such as Valentine's Day, and New Year's Eve just because of the several simultaneous narratives you'll be following throughout the coming-of-age romance film.

"What sets this movie apart is that there are so many characters and so many storylines going on that I think that there is a character there for everyone to relate to and pull from," Mitchell said in a red carpet interview with NBC Access. "And it's such a universal theme. It's a coming-of-age film about people at a crossroads, figuring out where they want to go post-high school. Whether that's happened to us in the past, or coming up, it's universal."

So if you're looking to prepare yourself for The Last Summer, there's no YA novel to consult. All you can do is have your tissues ready for some "too real" feels.