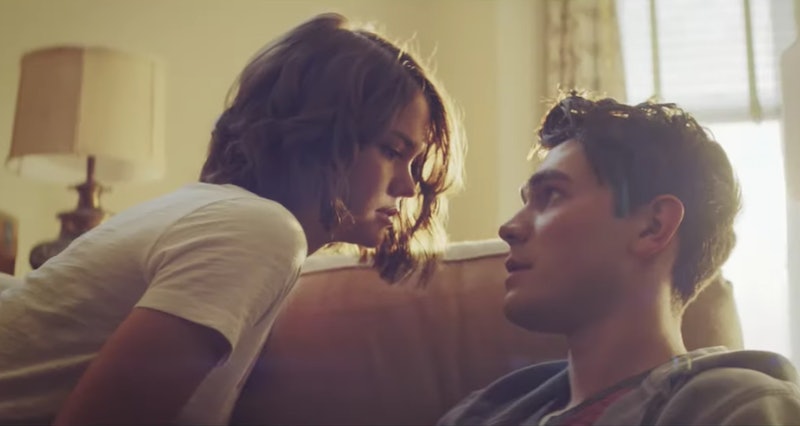 We're all used to seeing KJ Apa play the brooding, redheaded jock Archie Andrews on the CW's other-worldly mystery drama Riverdale. But the actor's latest project features a different, more universal coming-of-age experience than being hounded by the FBI or targeted by a crime boss. The Netflix Original The Last Summer — which you can start streaming on May 3 — will give you a major dose of nostalgic vacation vibes, and remind you of the good old days when "summer" was more than just a season, but a big transitional period leading you to whatever was to come next. Bustle has an exclusive look at The Last Summer trailer and official poster below.

The movie follows the journey of four friends Griffin (Apa), Phoebe (Maia Mitchell), Erin (Halston Sage), and Alec (Jacob Latimore) as they embark on their last summer after high school, before they all go their separate ways. This means a lot of breakups, potential pair-ups, self-discovery, and wild experiences — all while they figure out what to do with the next chapter of their lives.

The trailer opens with Griffin, running down the train station platform and finally working up the courage to ask his friend Phoebe to "hang out." Then it cuts to a montage, peering into the lives of all four of the main characters as they go through the emotions of dealing with a clean slate: New experiences, new people, and big decisions. As Griffin narrates, "It's the last summer after high school ends. The last chance to decide who we want to be, and who we want to be with."

While their formative summer includes a lot of uncomplicated fun-under-the-sun moments involving the beach, jet skis, skate parks, baseball games, road trips, and parties, it's also rife with high stakes scenes and dramatic dialogue. Griffin is trying to navigate his feelings for Phoebe, and trying to figure out the future of his relationship with her. All the while, Phoebe is also struggling and questioning her ability to love another person, Erin breaks up with Alec and begins to date big time baseball player Ricky Santos (Tyler Posey), and Alec is trying to avoid having the summer — and Erin — slip through his fingers.

At its heart, the movie is a romance that zones in on a very particularly challenging time in every teenager's life. As Griffin says in the trailer, the season is what he and his friends perceive to be their "last chance to go all in" before things change, and before they all have to move on and begin to shape their careers, as well as fully live out the rest of their adult lives. In other words: YOLO.

The trailer doesn't exactly reveal the whole plot, but you can be sure that this movie is going to hit all the highs and lows of that first post-high-school summer. And, it looks like there will also be some pretty steamy scenes à la KJ Apa. And that, we certainly can't get enough of.