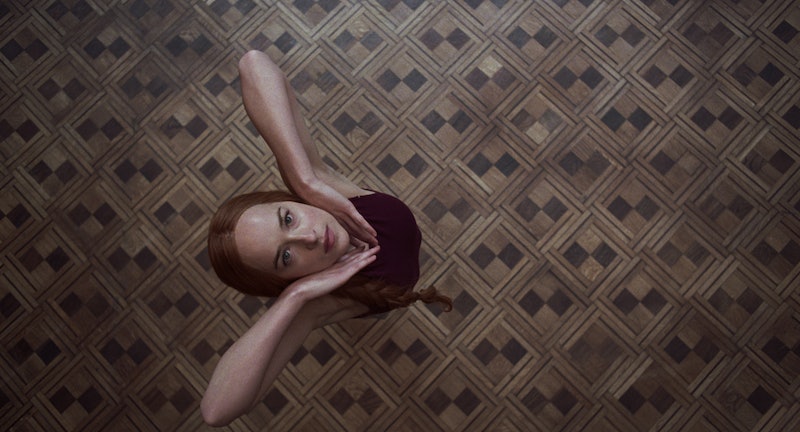 In 2018's Suspiria, which hits theaters in wide release on Nov. 2, a world-class dance school is the setting for a mélange of horror, and it will probably make you second guess all of those Center Stage dance academy fantasies you've had. The new movie, directed by Call Me By Your Name's Luca Guadagnino, uses the 1977 Italian version of Suspiria as inspiration for the new film, and fortunately the Markos Dance Academy in the new Suspiria is as fake as the original movie's Tanz Dance Academy.

Even though the dance academy that Suspiria features isn't real, the movie was filmed in an abandoned hotel in Italy, which very much was real in the past according to the New York Times.

In an interview with Deadline, the Italian director explained that they'd filmed the remake, "on top of a mountain overlooking the Italian city of Varese in an abandoned hotel." The director then added, "There was a lot of eeriness in the place, which probably resonated with Dakota [Johnson]," who plays the main character, Susie. The New York Times feature about the filming of Suspiria reveals that the Italian hotel was actually called Grand Hotel Campo dei Fiori, and was located in Varese. The hotel became a perfectly sinister setting for the Markos Dance Academy, but the Times describes the Italian hotel as "once-glamorous. It stopped running way back in 1968.

While talking to the Times, Suspiria's production designer, Inbal Weinberg, described how she designed each room in the dance academy run by witches, including the secret rooms in which gruesome rituals were performed.

In describing the main room of the dance academy's underworld, called the Room of the Feasts, Weinberg told the Times, "We knew we were going to use these large walls, and we were trying to figure out the right texture and we didn’t want to just paint them. It was Luca’s idea to use hair." Then, the designer added, "We conceptually decided that the texture of the wall is the hair of victims." As if the room wasn't creepy enough, knowing the creative vision behind it makes it just that much more sinister. Then again, it really fits the twisted and dark events that take place within Suspiria's haunting Berlin.

In an interview with Elle, Johnson revealed that the movie's frigid set led her to rely on coconut oil in her daily routine. "[The hotel] had 30 telephone poles on the roof, so there was electricity pulsating through the building, and everyone was shocking each other. It was cold as shit, and so dry. The only thing that helped was dousing myself with oil every night. Now I can’t get enough,” Johnson said.

While she didn't specify that the abandoned hotel creeped her out, Johnson told Elle that filming Suspiria "f*cked me up so much that I had to go to therapy." Considering that the movie was filmed in a cold, loud, creepily abandoned hotel, and oh yeah — it's all about terrifying things, Johnson's need for therapy sounds more than justified.