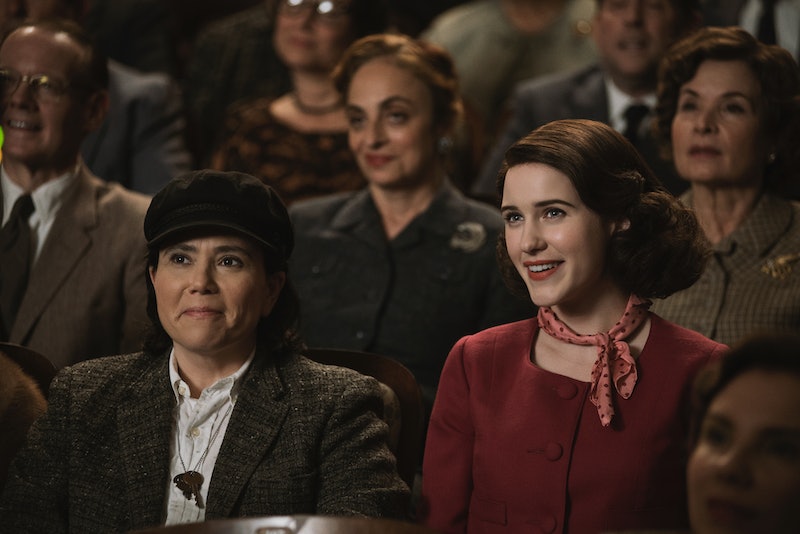 With its colorful period details and meticulously decorated sets, Amazon's new original series The Marvelous Mrs. Maisel takes place in a particularly cheery version of the 1950s New York City stand-up comedy scene. Given all those period details, you might be wondering: is The Marvelous Mrs. Maisel a true story? The answer is a little bit complicated.

The show follows its protagonist, Miriam "Midge" Maisel, through a myriad of interesting changes. She begins her journey as the perfect wife and mother, gliding through life with a sense of purpose and a sense of humor. Then one day, it all comes crashing down. Her marriage disintegrates, but through that loss, she finds her calling — stand-up comedy. The catch? She's living in the early 1950s — not exactly a golden age for housewives with moxie.

Stand-up comedy is often seen as a “boys’ club” of sorts, relegating female comics to a sort of “unicorn” status — they’re simultaneously viewed as unique and charming while also remaining the odd one out. And if they’re successful, they must be the exception to the "women aren't funny" rule. The Marvelous Mrs. Maisel is about to showcase a different narrative as it relates to women in comedy, and it's tempting to believe that Midge's story has no historical parallels — though that's not quite true.

Though Midge herself is a dreamed up character, actress Rachel Brosnahan (House of Cards) educated herself on female comics of the time in preparation for the role, according to Vanity Fair. The magazine reports that Brosnahan delved deep into PBS documentaries about New York City and the lives of Jewish-Americans during that era. She also familiarized herself with the iconic career of Joan Rivers, whom the actress said shares some similarities with Midge, though the two approach comedy in different ways. "Joan’s comedy came from a place of feeling like she never belonged. She always referred to herself as the ugly duckling," Brosnahan told Vanity Fair. "Midge is the opposite. She knows she is beautiful; she knows she is great at what she does, and she will be the first to tell you about it."

The show's creator, Amy Sherman-Palladino, whose main claim to fame is creating Gilmore Girls, said in another Vanity Fair interview that Rivers' comedic style was an influence on the show. "I’m a massive Joan Rivers fan; the world is sadder without her, and will always be sadder without her. And she had that wonderful mix, that battle of wanting to be accepted on a feminine level — [but] you can’t have that many balls and be accepted on a feminine level," she told the magazine. "It just doesn’t work that way. It was such a wonderful dichotomy, and she crafted those monster jokes. And because we knew we were going to get an actress to do [this part], we felt like it needed to be more of a rant, of a monologue. Going forward, that’s how we’re looking at Midge’s humor. She’s going to learn how to control that and craft it a little more."

With The Marvelous Mrs. Maisel, Sherman-Palladino is continuing her career of putting compelling stories about women on the small screen. "It is a show about a woman, being written, directed, and executive produced by a woman and hopefully future directors to come," Brosnahan said in the same Vanity Fair interview. "It’s clear how important it is to Amy to be telling stories about women, but not just for women. It’s a fresh change of perspective that I don’t think I realized how much I’d been craving."

Now more than ever, we need to amplify female voices in comedy. Thankfully, The Marvelous Mrs. Maisel does just that.