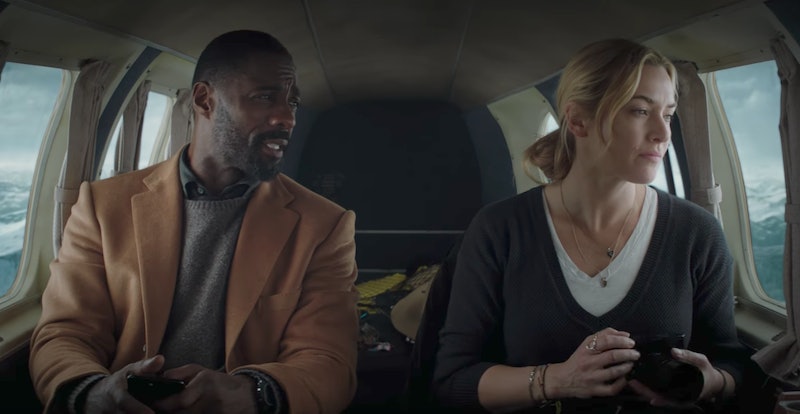 If there are two people you want to to root for in a dire, life-or-death survival situation, Kate Winslet and Idris Elba might be at the top of the shortlist. Their new film, The Mountain Between Us, isn't based on a true story but what it does draw on is some serious inspiration from a genre of film — the disaster genre — that makes it feel like this story has happened in real life. Add to this the very real instances wherein planes have gone down in icy climes and forced survivors to use every last tool they had to survive, and it's no wonder the The Mountain Between Us comes to life with the vividness of a true story.

The new movie, out Oct. 6, tells the story of Ben (Elba) and Alex (Winslet), two people who find themselves in dire straits when their flight gets cancelled. Alex needs to get home because she's getting married soon and Ben is ready to get back home after a long medical conference. When Alex happens to meet Ben in the airport after she sees he's on the same delayed flight as she is, she suggests they take a charter plane together as a way to expedite their return trip.

Fortunately, they find a plane for hire. Unfortunately, that plane happens to go down in the wilderness of the American West. With their pilot dead and having failed to file a travel log that could easily be used by police to track them down before they took off, Alex and Ben have to go into full-on survival mode in the deep of winter if they want to make it home to their loved ones.

For Winslet, The Mountain Between Us may feel like familiar territory having starred in Titanic, a similarly icy and intense survival film with a strong romantic undercurrent. In fact, during the early days of press for the film, Winslet was quick to recognize that the film which made her famous gave her direct real-world experience she could use while shooting The Mountain Between Us.

In fact, as ELLE reported in June, Winslet recalled just how much working on Titanic informed her experience shooting in the wilderness on this film. "There are so many outtakes where I'm like, 'Ice, anyone? This brings back memories!'," the actor joked with reporters. "I'd be like, 'No, you've heated that up too much and I'll tell you why. As soon as that water hits the cold air, there's going to be steam that's going to rise. Trust me.' Or, 'Oh, you've got a warming tub. Let me just check the temperature of that water.' There was a Titanic memory in it at least once a day."

So while The Mountain Between Us isn't ripped from the headlines, it's clear that it's relatable to at least one of the cast members of the film; certainly a great way to invoke a sense of realism for other viewers, right? Having that kind of connection made by Winslet means that the emotional responses evoked (from Alex's side of the story, at least) will feel as palpable as if you, the viewer, had been put into that situation yourself or if you had read about it online.

And let's not kid ourselves: The Mountain Between Us may not be based on a true story, but disaster and survival films like this one have been made that draw on similarly real events and actual true stories. Take the Liam Neeson starrer The Grey, which is a bit more of an existential take on the "stranded in the freezing wilderness" tale that The Mountain Between Us is touching on. Or, for a more real-world twist, consider Everest, the film which is based on the 1996 disaster wherein an unforeseen event on Mount Everest left a team of climbers stranded. Even The Revenant, another film based on a true story about a man forced to survive in the freezing wilderness against incredible odds, is called to mind as you watch the fictional-yet-it-feels-real film that is The Mountain Between Us.

While this epic film may not be based in reality, it's certainly slotting into a well-trod genre full of similar survival tales. However, those other films don't have the electric pairing of Elba and Winslet, so if you're going to see one survival film that feels eerily true to life, why not do it with these two magnificent actors at the helm?

More like this
What Colonel Tom Parker Was Really Like
By Morgan Leigh Davies
What’s New On Netflix: Lana Condor’s Ghostly Comedy & A Sexy Reality Series
By Arya Roshanian
'Dune: Part Two' Could Include A 'Little Women' Reunion
By Arya Roshanian and Alyssa Lapid
Kimberly J. Brown & Daniel Kountz Looked Back On Their ‘Halloweentown’ Romance
By Stephanie Topacio Long
Get Even More From Bustle — Sign Up For The Newsletter