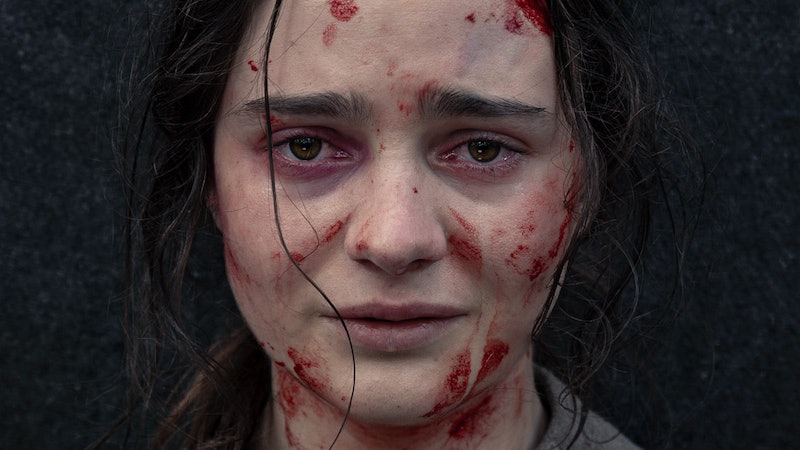 In her breakout film The Babadook, filmmaker Jennifer Kent explored grief and maternal fear through the story of top hat-wearing specter who escapes his storybook to haunt a widow and her young son. The terror in her new movie, however, comes from a much more literal source. Coming to theaters on Aug. 2, The Nightingale is a true story in the sense that it's inspired by a real, dark period in Australian history. Kent created her main characters — trapped Irish convict Clare (Aisling Franciosi), handsome and sadistic British officer Hawkins (Sam Clafin), and Aboriginal guide Billy (Baykali Ganambarr) — and the journey they take, but made every effort to ensure that The Nightingale was accurate to the era and indigenous culture it depicts.

"I’ve had a connection with Tasmania for many years, and I’ve always felt its ghosts," the Australian-born Kent tells me when we meet in the lobby of a Park City hotel ahead of The Nightingale's Sundance premiere. "I was always exploring its history and I’d been a bit in the wilderness, so I knew it. I really love it. But I also feel the heartbreak of it — the enormous loss as well."

The Nightingale is set in 1825, when the Australian state of Tasmania was a British colony. Clare was brought there to serve a sentence that leaves her at the mercy of Hawkins and the rest of the soldiers who take what they want from the people and the country around them. After an unthinkable act of violence is perpetrated against her and her family, Clare sets off into the Tasmanian wilderness on a revenge mission, reluctantly guided by a young Aboriginal man.

"It was of absolute importance to me," Kent says of finding an Aboriginal consultant to advise her on the film. "And when I couldn’t initially, in very early stages, pre-first draft, find that person, I decided I couldn’t make the film. Because I can’t go in and abuse people who’ve [already] been so badly abused by not respecting their culture and allowing them to have a voice in the story." Eventually, she found Jim Everett, a writer and poet whose aboriginal name is pur-lia meenamatta and who Kent refers to as "Uncle Jim."

"He was there every step of the way," the director says, approving everything from costumes to casting.

Much of the film's authenticity also comes from that casting, particularly that of Ganambarr, a dancer who was completely new to acting and who Kent and her team found when they scouted aboriginal communities in Far North Queensland, Australia. The role of Billy is a demanding one, as the guide's initially combative relationship with Clare transforms considerably over the course of their journey.

"I worked with him a bit [before shooting], and I could see he was very focused and serious, very talented and could take direction," Kent says. "But I really didn’t know the extent of his genius until we were on set."

It was a risk rewarded, to take a chance on a completely fresh talent. But risk is woven through every aspect of The Nightingale. Kent also went against her first impression of Clafin, the handsome and usually affable Me Before You and Hunger Games star, to trust him with the cruel officer who doesn't want to relinquish Clare as his possession. ("[Hawkins] looks like the hero, but he’s not. And that often is the case in life," the director muses.) She dared to shoot in the wilderness of Australia, an experience that she clearly recalls with a little pain and a lot of incredulity that she and her crew pulled it off.

"We worked seven days from morning to midnight. I got very little sleep," she recalls, ruefully. "I was so stressed the whole time. No, I don’t recommend it." She laughs — tired, but mostly proud.

Kent also expresses weariness that early reviews and reactions to the film are focused on the violence experienced by Clare and others. But it's impossible not to ask about it. The Nightingale is painful to watch at times; there will be few audience members who won't be compelled to shut their eyes or turn away at certain points.

"If you break down the film in those moments, it’s people’s faces [you're seeing]," Kent says of the scenes where instances of sexual violence and other brutal acts occur. "And I find it fascinating that that’s what people are uncomfortable with — the hatred and the rage. It’s not the blood and viscera that makes people uncomfortable."

The scenes are so emotionally scathing and physical, however, that preparation, context, and choreography were key to keeping the actors comfortable. The director recalls that the most complicated of them all required five separate rehearsal periods, just to get the movement down so that everyone would be safe and know where they needed to go. And of her leading lady in particular, Kent says that "it was very important that [Franciosi] was supported and understood the extent of the sexual violence, trauma, and PTSD [her character experiences], so it was meetings with rape crisis counselors and psychologists we had on board the whole way through."

In all the pain of this film, beauty does shine through — often through music, as the title suggests. Clare is "the Nightingale"; part of her service to Hawkins is to perform songs from her homeland for him and his men. Franciosi performed the pieces live on set, Kent tells me, completely unaccompanied. The director chose the songs Clare sings, along with an "Irish cultural expert," who ensured that they were accurate to the time period.

And later in the film, Billy also shares his voice with Clare and the audience. Per the film's production notes, Theresa Sainty of the Tasmanian Aboriginal Centre translated the song he was to sing from English into "palawa kani," the composite Tasmanian Aboriginal language that took shape after colonization destroyed the existing, separate regional languages.

"What’s interesting is how similar the Aboriginal and the Irish cultures are in terms of sharing their ritual, song, how important language is and how when you take away someone’s language, you can really destroy their identity," Kent says. "And that’s why [the colonizers] did."

There are performances, skills, visuals, and vistas to be appreciated. But in its historical accuracy — necessary for it to be an effective indictment of colonization, drawing a parallel between sexual rape and the rape of a culture — The Nightingale is still a film to be endured. Kent hopes that you can look beyond the brutality and see the humanity underneath — particularly in the bond that develops between Clare and Billy.

"That’s the heart of the film," Kent says. "Everyone’s focused on the 'violence, violence, violence' — talk about it endlessly. But for me, I’m thinking, 'Do you even see these characters?' There’s such a beautiful love, against terrible odds. And that’s why I made the film, to explore that."