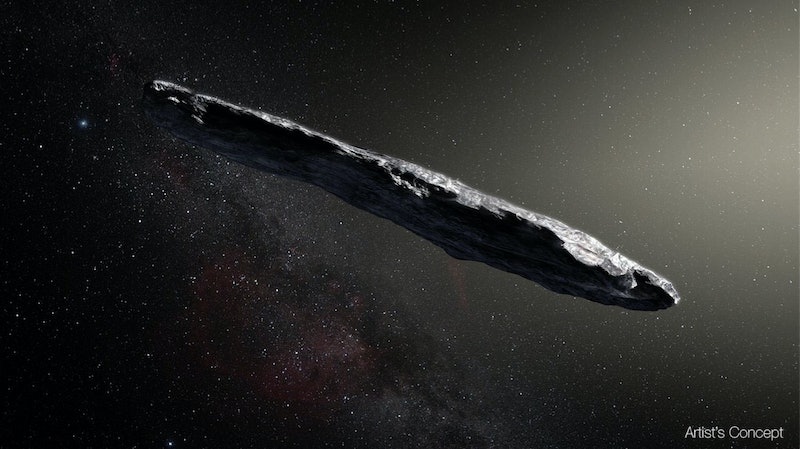 Well, friends, it might be time to prepare yourselves to welcome your new overlords, because ... aliens might be headed our way. Which is the grossly irresponsible leap I just made from the far more balanced take from two Harvard scientists, who think that the mysterious "'Oumuamua" object in space could be an alien spacecraft — or, at the very least, some kind of alien technology.

First, a bit of background on 'Oumuamua. Per NASA, the mysterious object in space was first noted in October 2017, when it made headlines for being the first known interstellar object to enter our solar system. At first, researchers believed it was a comet; then later, it was classified as an asteroid; but further investigation of the object concluded, because of its changes in speed, it behaved more like a comet. Researchers discovered that not only was the object moving at unusually high speeds, but that it was "long and highly-elongated," noting that the "aspect ratio is greater than that of any asteroid or comet observed in our solar system to date."

Since its discovery, 'Oumuamua has been a topic of astronomical fascination around the world. Researchers from facilities across the globe have been tracking its brightness, orbit, and color; per NASA, it is theorized that it hailed from the star Vega in the Lyra constellation — a journey that, even given the object's unusually high speed, took enough millions of years that Vega isn't in the same position anymore.

All of this is important to consider, seeing as Avi Loeb and Shmuel Bialy, two Harvard researchers, now plan on publishing a paper in The Astrophysical Journal Letters on Nov. 12 claiming that 'Oumuamua may, in fact, be an alien spacecraft — or, as the researchers put it, "a fully operational probe sent intentionally to Earth vicinity by an alien civilization."

Granted, this isn't their only theory — first they posit that if 'Oumuamua is, in fact, alien, it could be "debris from an advanced technological equipment," or something other civilizations use to transport cargo between planets. These two theories proposed by the researchers aren't based on the unusualness of the object alone, but by the way it sped up when it passed our solar system's sun. The researchers propose that it could be a "lightsail of artificial origin," or an object that increases its speed when it is touched by light — ideal for moving cargo between planets, as another more widespread, advanced civilization might do more easily than our attempts at it, or perhaps ideal for scoping out other areas of the known universe. In other words: us.

That being said, the researchers acknowledge that "thousands of interstellar ‘Oumuamua-like space-debris are expected to be trapped at any given time in the Solar System," meaning the mysterious object, though mysterious, is not entirely alone. But they urge researchers to further examine similar objects in our solar system, and look further into the "lightsail" theory, which may separate it from the pack — a discovery that would be monumental, should it turn out to be true.

And if it is — if there really is an alien civilization trying to slide into Earth's figurative DMs and bring back deets — this turn of events might be a little more prophetic than you think. The name 'Oumuamua is Hawaiian — a tribute to the University of Hawaii, where it was first spotted — and translates to "a messenger from afar arriving first.” Unfortunately, since 'Oumuamua is now beyond reach of our telescopes, it may be impossible to ever prove or disprove these particular theories. But hey, chin up — maybe all we have to do is wait another hundred million or so years for our interstellar neighbors to drop in.