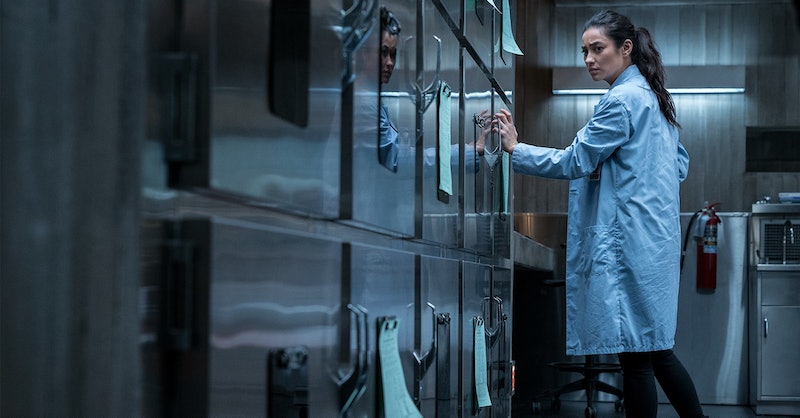 When a burnt-out former cop decides to work her way back into society, she doesn't realize her new job at the morgue might force her to face more than her own demons. Exorcisms are a real enough practice, as are ex-police trying to cope with PTSD, but for those wondering whether The Possession of Hannah Grace is based on a true story, the inspiration and real elements behind the new film may surprise you.

In a Daily Dead interview with the film's writer Brian Sieve and producer Sean Robins, Robins said the film's initial inspiration was a newspaper article "about a woman in L.A. who was ordered to take part in community service, and her service was in a morgue. She was fairly innocent; it wasn't a ghastly crime that she committed. And the idea of a woman being placed in that situation, who had no training or experience, was intriguing to us."

In Hannah Grace, Pretty Little Liars' star Shay Mitchell plays Megan Reed, a young officer who went into a tailspin of self-destructive behavior after seeing her partner die on the job. She's been slowly putting her life back together, and Reed's AA sponsor thought a night shift position would be the perfect way for her to avoid evening temptations while getting back into the workforce. That the gig's in a morgue isn't a problem; Reed seems glad not to be around the living and as she says in the trailer, "When you die, you die. That's it." But when a young woman's gruesomely mangled body comes in, the result of an exorcism gone awry, The Possession of Hannah Grace takes a turn into terror.

Is Hannah's body is being manipulated by a demon or has the stress has finally gotten to Reed? Learning the ultimate answer is part of the film's tension. In the same Daily Dead interview, Sieve mentioned that the film was inspired by other psychologically-rooted horror films like Let's Scare Jessica To Death, The Haunting of Julia, and Rosemary's Baby, though that doesn't keep Hannah Grace from going full-gore with body horror and bloody effects. The key secret behind making those gruesome body-contortions look believable? Actually make them happen in front of the camera, it turns out.

Speaking to JoBlo, Mitchell talked about her co-star Kirby Johnson, a dancer and contortionist who plays Hannah herself. "The way she moves is, at first, I kept saying 'disgusting,' but now I say almost beautiful, when her joints pop ... She's poised, naturally, just beautiful. When you see her move it's almost like a weird dance you've never seen before, but you can't take your eyes off of it."

In another JoBlo article, it's noted that Johnson initially impressed the viewers in a music video where she crawled out of a box. Part of the film's freakiness is exploring the claustrophobia of a morgue's small spaces, so she was (pardon the pun) a perfect fit.

Though possession is the supernatural angle presented in the film's marketing, it's more of a method through which to explore trauma, with the added eeriness of a real-life setting most people find uncomfortable due to its proximity to death and corpses. Reed's worst night on the job might only have a small stake in real-life incidents, but the ideas and fears it explores about failure, not being able to trust yourself, and spooking yourself IRL are plenty real enough.