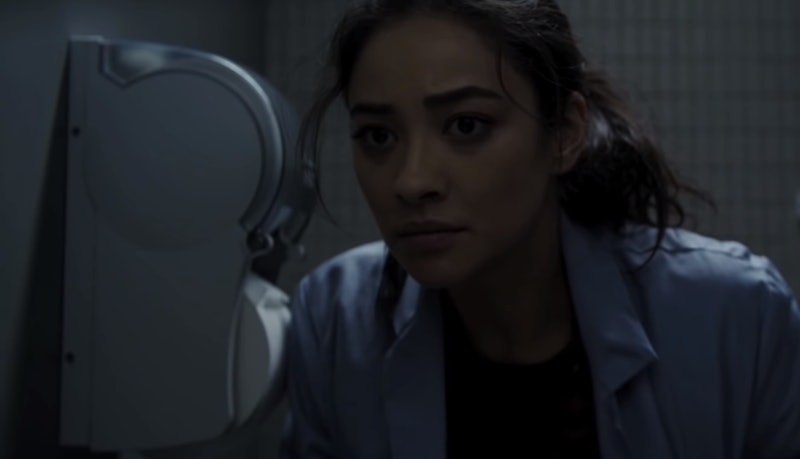 Shay Mitchell seems to have a passion for unsettling thrillers. The Pretty Little Liars actor is starring in The Possession of Hannah Grace, which comes out on Nov. 30, and looks absolutely terrifying. The trailer for Shay Mitchell's new horror movie looks super scary, so if you're not a fan of the genre, you might want to sit this one out.

Sony released The Possession of Hannah Grace trailer on Monday, and the premise of the movie looks pretty creepy. Based on the trailer, it looks like Mitchell's character, Megan, takes a job working at a morgue after dealing with some serious trauma. Not only does her past catch up with her, but one of the bodies in the morgue isn't actually dead.

Apparently, a young woman, Hannah Grace, died in the midst of an exorcism. And because this is a horror movie, there's still a part of the demon that was haunting her left in the body, even though Hannah Grace herself is gone. (Sadly, people have died from attempted exorcisms in real life, making this a horror movie topic with dark roots and far too many heartbreaking outcomes.)

The trailer shows Megan's words about believing that "when you die, you die" coming back to bite her, since whatever was haunting Hannah Grace is decidedly not dead. Still, there's also a scene of Mitchell taking an unidentifiable pill. That plants the seeds of doubt as to whether the corpse is actually moving, or if it's happening in Megan's head.

The dialogue seems a little cheesy, but it looks like there will be plenty of jump scares. So if you love being scared by sudden movements, this might be a good movie for your tastes.

Mitchell is definitely carving out a place for herself in the thriller/horror space, too. Pretty Little Liars could be pretty twisted at times, and she's stayed within the genre since the Freeform series wrapped. Mitchell is currently starring in Lifetime's You, a TV thriller about stalking and murder. She's not the only PLL alum to take on a horror film, either — Lucy Hale starred in the scary movie Truth or Dare earlier this year.

And if you're not a horror fan, Mitchell also has an upcoming project that will make PLL fans very happy. Mitchell will star in The Heiresses, an upcoming ABC TV show based on a novel by Sara Shepard, author of the PLL book series. Sadly, there aren't a ton of details about the new series so far — in fact, Mitchell is the only actor who's been announced in connection to the show.Based on the fact that she's leading the new series, Mitchell will likely play Poppy Saybrook, an heiress whose death brings her family members closer than ever. Poppy could live on through flashbacks and memories, and Mitchell would be perfect at portraying the mystery of her death on screen.

Until the show comes out next year, though, there's The Possession of Hannah Grace to tide PLL fans over. Megan doesn't look anything like Emily Fields, and that's not a bad thing. This creepy film will no doubt give Mitchell another chance to show her range, and leave fans screaming at the same time.