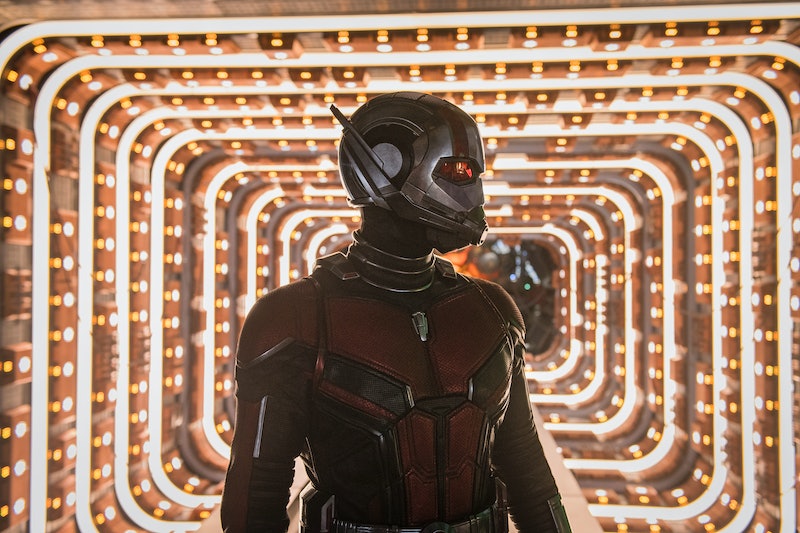 Major spoilers ahead for Ant-Man and The Wasp. The first Ant-Man introduced audiences to the concept of the Quantum Realm, a sub-atomic level of reality in which time and space no longer follow known rules. Over the years, the Avengers movies brought us the Infinity Stones which, individually, control time, space, reality, soul, mind, and power, and together give the holder ultimate control over the universe. Comic books have always had characters and plot lines that cross the boundaries of one individual hero's story, so it makes sense that things like weapons or sources of power may also be related. Which leaves many fans wondering if the Quantum Realm and the Infinity Stones are connected, and what it might mean for the MCU if they are.

A couple of the Infinity Stones sounds like they may have a bigger connection to the Quantum Realm than the others. The Time Stone is able to turn time backward and forward, so the fact that the Quantum Realm seems to stop time, or have no time altogether, seems significant. Even if one can't wield the Time Stone, access to time — and thus, time travel — might be possible in the Quantum Realm.

There's also the Reality Stone, which controls, well... reality, or at least how people perceive reality. For example, Infinity War saw Thanos turn bullets into bubbles, and practically transform the environment. And we get to see in Ant-Man and The Wasp that the Quantum Realm has its own way of distorting reality, and can transform what people see, feel, and experience.

But the post-credits scene of Ant-Man and The Wasp suggests that, for as much power the Infinity Stones possess, the Quantum Realm might be the stronger of the two. During the post-credits scene, Hope van Dyne (AKA The Wasp) and her parents, Janet van Dyne and Hank Pym, are powering up their newly-invented portal so that Scott/Ant-Man can travel back into the Quantum Realm to collect some powerful energy. But while he's inside, the other three are "dusted," victims of Thanos' evil plan to wipe out half of the population that closed out Infinity War. Scott, still inside the Quantum Realm, is safe, but trapped. But since he didn't vanish like the others, it's totally possible that the realm protected him, that it is a place where the Infinity Stones have no power.

Once Scott figures this out, and manages to somehow get out of the Quantum Realm, he's going to need help in figuring out how to use the power of the Quantum Realm to undo Thanos' destruction. Whether that help comes in the form of the other Avengers, or from Captain Marvel, whose been known to transverse the QR a bit herself, we'll have to wait and see.

But it's safe to say that if the Avengers are going to want to reverse the dusting, they're going to have to travel back in time. And since Thanos is still in possession of the time stone, and we're not even sure if any of the Infinity Stones work any more, the Quantum Realm will probably be a big part of how they get there. So while the Infinity Stones and the QR seem definitely connected in some way, let's hope that the Quantum Realm has the edge and can actually act as an antidote.