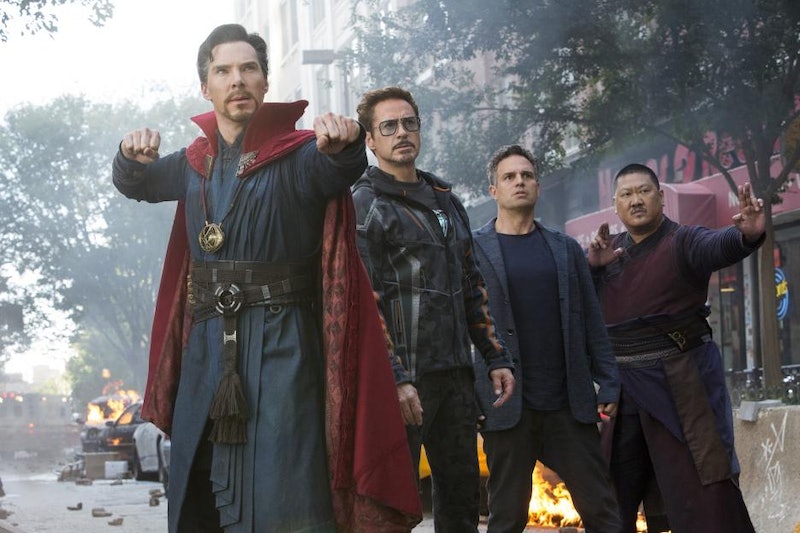 Major spoilers ahead for Avengers: Infinity War. It's almost certain at this point that Avengers 4 is going to have to involve time travel, seeing that the end of Infinity War sees many of our beloved superheroes dead. With Thanos achieving his goal of welding all of the Infinity Stones into the Infinity Gauntlet, he snaps his fingers and half of the population of the galaxy disappears as dust into the air. It's a major bummer of an ending for our heroes, and one that most certainly can't be the final end-all of the Avengers, right? And the only way to seemingly undo what Thanos has done would be to go back in time and prevent it from ever happening, as these Avengers 4 time travel theories hint at happening.

Before the events of Infinity War took place, fans were already speculating that Avengers 4 was going to involve time travel. Though the two films were shot back to back, set photos that leaked online were heavily suggesting that scenes featuring either time travel or alternate timelines were being shot. Some pics show a freshly shaved Chris Evans in his old, Avengers-era Captain America uniform. Others noted that Thor's Chris Hemsworth had the same long hair he sported in the earlier movies before it was chopped off in Ragnarok. And in many of the same photos, Robert Downey Jr.'s Tony Stark had much grayer hair, suggesting he'd aged a bit. So what would an older Iron man be doing with younger versions of Cap and Thor? Now that we know that Infinity War ends with half of them dead, a possible answer may be that they're trying to change the past.

But first, before Avengers 4 hits theaters in May 2019, we're getting two other Marvel Cinematic Universe movies. The first, Ant-Man and The Wasp, will premiere in July of this year. It's said that the story will dive deeper into what's known as the quantum realm, the alternate dimension where space and time are irrelevant. There was a hint of the quantum realm in the first Ant-Man movie, when Scott Lang almost gets trapped there. It's where Janet Van Dyne, the original Wasp and Hope Van Dyne's mother, has been trapped for years, and the new movie will supposedly venture further into the quantum realm in order to rescue her.

With Ant-Man and the Wasp traveling into an alternate dimension where space and time don't matter, perhaps they will discover a way of traversing linear timelines and affect things that have happened already in the past. Ant-Man isn't in Infinity War, so he's probably going to want to take some action after discovering what happens to the world. Adding fuel to that theory is the fact that Avengers 4 recast the character of Cassie Lang. Cassie, Scott's daughter, was six years old in Ant-Man, and the new actor playing her is 16. It's possible that Cassie's age has nothing to do with the story line of Avengers 4, but considering how much the past, and the future, are probably going to be involved, it's a safe bet to say her age is intentional.

The other movie that's going to hit before Avengers 4 is Captain Marvel, starring Brie Larson, which will premiere in March 2019. Captain Marvel is getting an original origin story separate from the comics, but we do know that the movie is set back in the '90s, before any of the other MCU movies (except Captain America: The First Avenger) take place. Why Marvel chose to set this female-led film in the '90s is a mystery, but it may have something to do with time travel. Since, in the comics, Captain Marvel spends many years traveling through space without aging, it's possible that she learns to master time, or space-time, or both. And considering Nick Fury reached out to Captain Marvel for help during the closing credits of Infinity War, he must believe that she's the only one with the power enough to undo Thanos' devastating finger snap.

Then again, Ant-Man and Captain Marvel might not be involved in Avengers 4 at all, and instead the Avengers might have to turn to one of their own for a solution: Doctor Strange. Since he is the master of the Time Stone, he has the ability to manipulate time. And Benedict Cumberbatch is the only major cast member to have read the entirety of the movie's script. Earlier this month, Cumberbatch said in an interview, "I had to sort of understand what the context was… I’m kind of trying to hold the multiverse together so kind of needed to know what goes on between the brackets." There's also a moment in Infinity War where Doctor Strange says he looks into the future to see all possible scenarios and outcomes of their war with Thanos. Out of millions of possibilities, they only win one. Might Doctor Strange know that the only one they could win would involve him giving up the Time Stone and dying in Thanos' plot, as he does in Infinity War? This possibility has led some to believe that Avengers 4 will actually include multiple timelines.

So, will Avengers 4 simply include rehash after rehash of the events of Infinity War until they hit the sweet spot and find that one scenario in which they win? It's possible, but since we can't jump through time, we'll just have to wait until May of next year to find out.