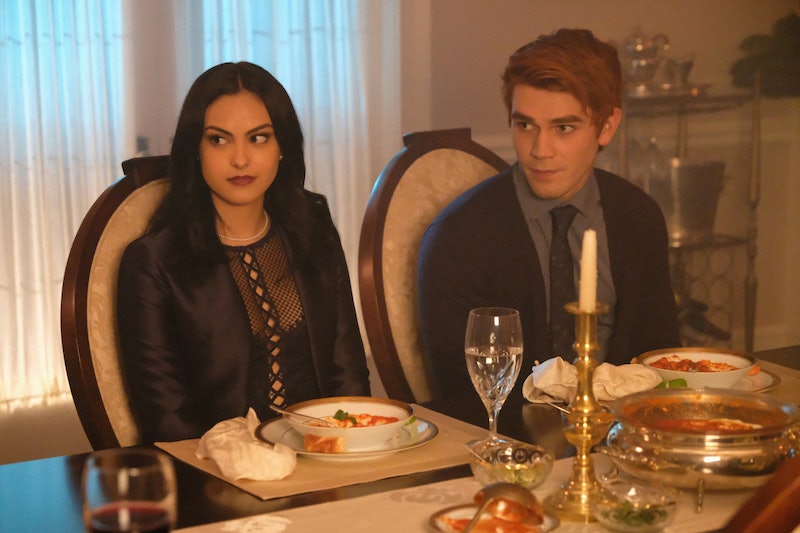 Every clue, no matter how small, can help piece together the solution to Riverdale's Season 2 mystery. Riverdale is based on the long-running Archie Comics, and the series has already incorporated many references and hints to its comics history. In order to be a good TV detective, you have to look at every possible clue given out by the show's writers, from lingering shots on certain props to any source material they may use to come up with their latest twist, so therefore, as the Black Hood mystery heats up, it's worth wondering if the name of Archie's vigilante watch group, "Red Circle," means anything in Archie Comics.

As it turns out, this might not be much of a hint as to where the story is going, but it's probably a sly reference for Archie superfans. There's still a chance that it could suggest something about the man who shot Archie's dad in the Season 1 finale.

Red Circle is the name of the publisher, launched in 1973, that handled Archie superhero content, including The Mighty Crusaders, a team that included hero Black Hood. The Black Hood is a vigilante who, in recent arcs, looks a whole lot like the man who attacked Fred Andrews, right down to the raggedy diamond-shaped holes in his hood — as Archie said, the man was wearing a hood, not a ski mask. So referencing the phrase "Red Circle" ties things even closer to the canonical masked character.

In the 2010 Mighty Crusaders revival, published by DC Comics, the first issue is summarized like this: "The Red Circle has closed, and the mystery around it has grown into a full-blown conspiracy." The Black Hood wasn't involved in this arc, but it's interesting that the Red Circle became an actual plot point.

So far, the Riverdale hood is more of an "Angel of Death" than an avenger, choosing to brutally murder residents with complicated and "immoral" pasts over stopping actual criminals. However, after attacking Fred, the Hood's victims were Miss Grundy, a known sexual predator, and two kids doing "Jingle Jangle," the latest Riverdale High party drug. That's not quite cleaning up the streets, but a dark hero might be motivated to go after those eventual victims.

In the time since the original Black Hood premiered in the 1940s, Red Circle has changed to Dark Circle Comics, and, as the name promises, has gotten a little edgier in order to fit the times. The new masked Black Hood vigilante is more morally ambiguous than the spandex-suited good guy and former cop he was even before the Red Circle days. One of the show's running themes is that ignoring the town's dark aspects and trying to sweep them under the rug only makes them more powerful. Referencing "Red Circle" might be a little hint about the show's timeline. In the comics, Black Hood is a legacy hero, and the mantle is passed down. Perhaps that will be incorporated into Riverdale as well, and the Black Hood has terrorized and/or cleaned up the town before.

Or, maybe Riverdale could be hinting that this version of the Black Hood is actually more like the Golden Age good guy than he seems — the show has no shortage of good characters with complicated pasts and complex ideas of right and wrong. Whether Red Circle is a suggestion that this masked man is actually a good guy, a reference to a long history of the alias, or just a small Easter Egg for longtime Archie Comics fans, this is definitely another clue that Riverdale Season 2 is going to be even more heavily inspired by its comic book source material than Season 1.