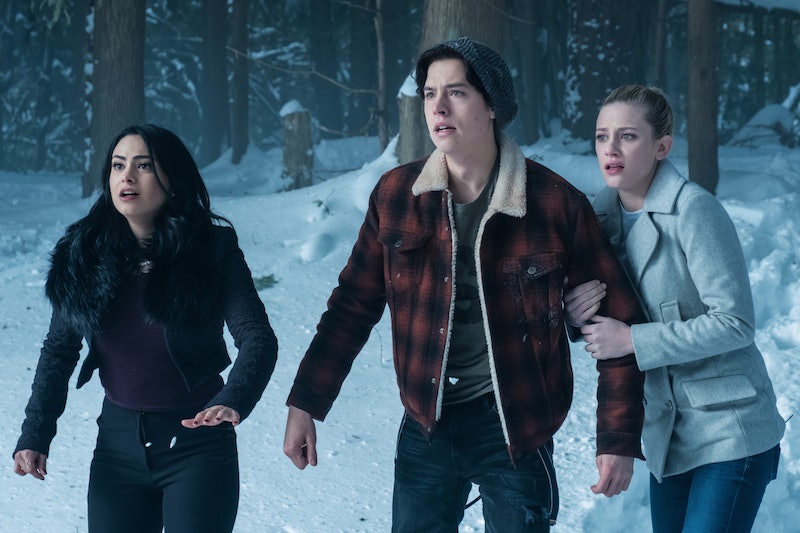 There are things in the new Riverdale Season 2 trailer that you can catch right off the bat — like, say, how dark this season is going to be — but there's a lot that can be missed in just one viewing. Watch again and again and maybe even a third time, and you'll catch a few clues about Riverdale Season 2 that will give you some insight into what to expect.

We already knew that the new season will pick up right after Archie's dad Fred was shot in Pop's Chock'lit Shoppe by a masked man. In the latest trailer, we see Fred on a gurney very much alive, at least for now. But Jughead is also heard questioning whether robbery was the motive or whether someone actually had it out for Archie's dad. Could this be Veronica's father Hiram Lodge's doing? After all, we know Veronica's mom Hermione really didn't want to keep working with Fred once Hiram was released from jail. Would Hermione go as far as murder? Does Archie's mother Mary have a reason to want Fred dead? How about those Southside Serpents?

Basically, this season on Riverdale, everyone is a suspect — hence the trailer's name "Motive." But in the hopes of helping you figure out what the heck is going on here, here are some of the clues that you may have missed and here are even more questions to ask yourself before the second season premieres on October 11.

1. Why Is Archie Holding A Gun?

In the first trailer for Riverdale Season 2, Archie was seen holding a gun, which makes sense, since this season will give fans a look at "Dark Archie." It's likely he's going after the person who shot his dad. But now we've caught a glimpse of someone else, possibly the person who gave Archie said gun.

My first guess is Dilton Doiley, who we found out last season had a thing for guns. The leader of the local boy scout troop admitted to Jughead that he was the one who fired the gun at the lake the day Jason died, but didn't want anyone to know. If Archie was looking for one, he would probably be the person to go to.

2. Who Is Cheryl Blossom Staring At?

We catch a glimpse of Cheryl in the hospital with her mom, who was burnt in the house fire Cheryl set. As she passes through the hospital halls, we hear Jughead say "People hold grudges," before an all-white wearing Cheryl flips her hair and locks eyes with someone. Is that even a hint of smile on her face?

We know that Cheryl is exacting revenge on her own family, telling Veronica last season she was done mourning the Blossom men. She also told her mom in a different Season 2 trailer, "Things are going to be different now mommy, better. You'll see." With her mom in the hospital, could someone else be coming to take over the family maple syrup business? I can't imagine Cheryl would like that one bit.

But, in a different trailer, we see Betty and Kevin going to talk to Cheryl about something, so is this look for them? Have they found out that Cheryl is behind the Blossom house fire? Could Cheryl also have a connection to the shooting?

There's a quick shot at the 21-second mark of someone looking badly beaten. They have a swollen black eye and blood drips from their mouth. They appear to be wearing a leather jacket, which points to one of the Southside Serpents. It could be Jughead after a very, very bad day. After all, he did take that Serpents jacket in the finale and is seen staring questionably at said jacket in this trailer. That wall and lighting also look a bit like FP's place or maybe it's Betty's house or Archie's.

But there's also a chance this badly beaten man could be Betty's long-lost brother, who Alice Cooper admitted she gave up for adoption. Riverdale creator Roberto Aguirre-Sacasa told Glamour that we'll likely meet Betty's brother in Season 2 and that there's a chance we've already met him. There's even a theory that Alice's son is Joaquin DeSantos, the Southside Serpent who's dating Kevin. And that she didn't have him with Hal Cooper, but with FP. That would certainly explain why FP's so concerned about Joaquin, now wouldn't it?

4. Where Is Sheriff Keller Going?

Sheriff Keller is on a mission, marching down a long hallway that appears to be in Riverdale High. Look close and you can sort of make out a woman wearing pink in the background. In Riverdale, it's a safe bet that pink-clad lady is one of the Coopers. Maybe be Betty, who writes for the Blue and Gold, or her mom Alice, a journalist who started helping out at the school paper.

If we learned anything from last season, it's that the Coopers have their secrets and are even better at uncovering them. Could they be sitting on a scoop that the sheriff wants to keep quiet? Did they figure out who shot Fred and now the sheriff needs their help?

5. How Big Of A Villain Is Hiram Lodge?

Hiram is out of jail and back in Riverdale, but you may have missed his trailer cameo. That's because it's less than a second long. Hiram, played by Mark Consuelos, is sitting at a table in what appears to be the Lodge home, with a nice bottle of wine and a cheese spread. It's already been revealed that Hiram is going to play a key role in Season 2, which should make you afraid, very afraid.

6. Whose Wedding Is Veronica At?

Since Veronica is in high school, let's guess it's not hers. But with her dad's return to town, it's possible Hiram and Hermione are looking to renew their vows and rekindle their love. But let's not ignore this look that Veronica's giving. Whoever's at the end of that stare is someone she clearly only has eyes for. First guess is Archie, but, on Riverdale, you never really know.

7. Who Is Archie's Mom Winking At?

Clearly, Mary is attending this wedding, but is it hers or someone else's? That wink could be meant for Fred, who has made a recovery and decided to call off the divorce. The two could be giving it a second try and she could be winking at Fred or Archie or even Veronica, who could be one of her bridesmaids. But, there's also a possibility that this wedding isn't hers and that wink is a whole lot more suspicious. Could she have something to do with the shooting and is now winking at her partner in crime? Could that person be Hiram, who she's teamed up with to get revenge on Fred and Hermione for hooking up?

This trailer clearly leaves fans with more question than answers that will hopefully be addressed when Riverdale returns next month. But, let's be honest, the premiere may just leave us with even more questions.

More like this
This 'White Lotus' Symbol Could Hint At A Major Character's Death
By Grace Wehniainen
The ‘Emily In Paris’ Season 3 Trailer Teases Major Career & Love Crossroads For Emily
By Bustle Staff
The 'Ginny & Georgia' Season 2 Release Date Is Only A Few Weeks Away
By Martha Sorren
Yes, That Is Victoria & Another ‘BiP’ Alum In Zach’s ‘Bachelor’ Trailer
By Kadin Burnett and Grace Wehniainen
Get Even More From Bustle — Sign Up For The Newsletter