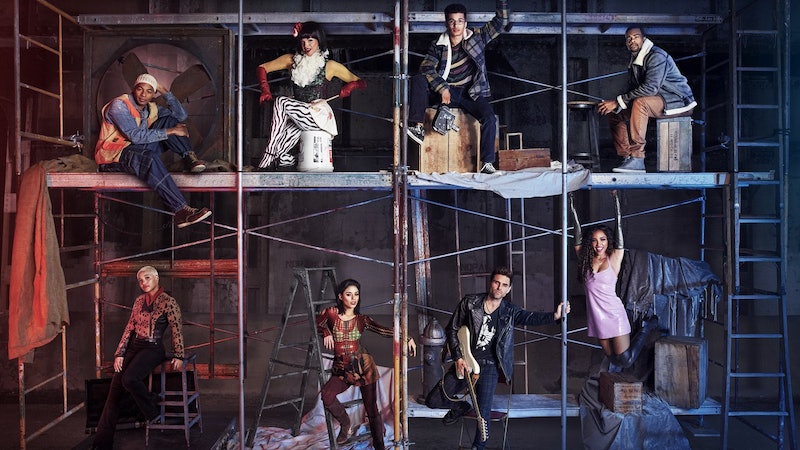 There's only us, there's only this, and there are only mere hours left until Rent: Live premieres on Fox. It's the latest in a long line of live TV musicals (Grease, The Sound Of Music, and Jesus Christ Superstar, to name a few), and perhaps one of the hardest to adapt for a primetime broadcast: there's a ton of sex and profanity in Jonathan Larson's hit musical. One thing they won't have to worry about? The Rent: Live cast lip-syncing, because this group has the singing handled just fine on their own.

If you've been living under a rock for a few months, no big — the cast of Rent: Live is pretty easily recognizable. Jordan Fisher, who starred in a little show called Hamilton, is Mark Cohen; Grease: Live's Rizzo, aka Vanessa Hudgens, will be Maureen Johnson; Dope breakout Kiersey Clemons is playing Joanne; Jesus Christ Superstar's own Judas, Brandon Victor Dixon, is taking on Tom Collins; and RuPaul’s Drag Race alum Valentina is stepping into the role of Angel. Rounding out the cast is singer Tinashe as Mimi Marquez; newcomer Brennin Hunt as Roger; and R&B fave Mario as Benny.

Now, what do all of these people have in common? Uh, they all have serious musical chops, and they've all done live shows or live musicals or all of the above. Fisher, Hudgens, and Dixon already have live network musicals under their belts, so we can definitely expect that the cast of Rent: Live will be singing their hearts out live when the show airs. No lip-syncing here! In fact, Tinashe gave a little preview of "Another Day" on her Instagram.

Chills, and that was just rehearsal.

So what else can we expect from the live show? Marc Platt, who put together Grease: Live and Jesus Christ Superstar, told Vanity Fair that he wants the audience to be involved in the show and to combine a theater experience with a movie one. "Think of an environment that's everywhere, that surrounds you. When you think of live performance, you think of audience. When you think of cinematic experience, you think of great camera work. So all those combine," he said. It will also probably help that Mark Cohen, the show's main narrator, always has a camera with him — it blends right in! And Vanity Fair further reports that the set of Rent: Live is a full circle that extends several levels so that the cast has full reign to run around.

Rent is a rock show, by all accounts, but there's still something for everyone to love in this production. Executive Producer Adam Siegel told Variety that the show spans places, times, and generations. He said:

"Rent was written by this young man who believed in true love, standing for what you believed in [and] that art was more important than anything else — all of these things that at some point in our lives we all believed too. For a young person it ignites that part of you, and for an older person it wakes up that part of you again, and that's the most fun thing to put into people's living rooms."

Live theater is a rush, even when you're watching it at home, and it will be a pleasure to see what this diverse, musically talented Rent: Live cast can do with its beautiful source material.