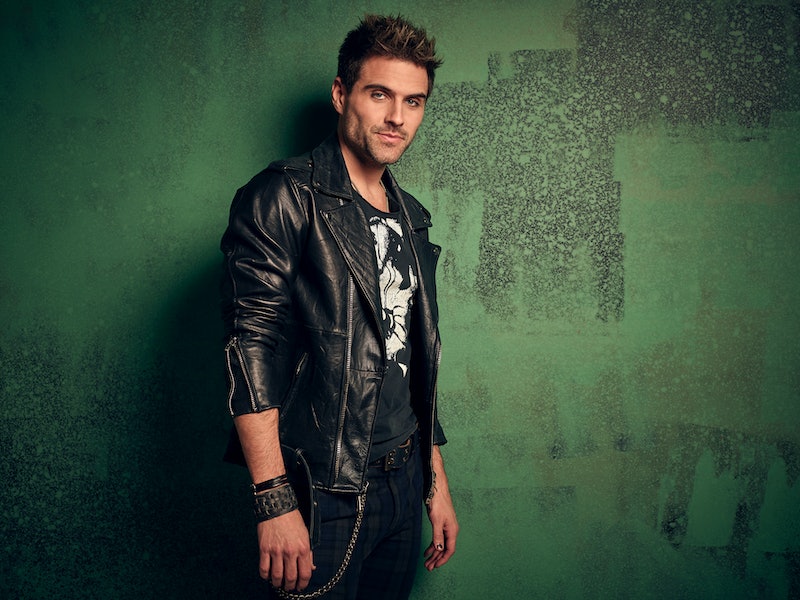 When Rent Lives airs on FOX Sunday, January 27, fans of the Pulitzer prize winning Broadway classic may notice a few changes — but the new cast doesn't want you to worry. We're in good hands, according to Brennin Hunt, who is playing Roger in Rent Live. In an interview with Bustle, the performer talks about how he has connected to the material and why fans should be excited, rather than scared, of what's to come.

Though this is Hunt's first musical (aside from an elementary school production of Mary Poppins, he tells Bustle over the phone) he's an established singer-songwriter. You can already listen to Hunt's music. He released an EP in 2007, and has a handful of singles available on iTunes and other digital platforms. The artist is releasing a single titled “Can’t Hold a Candle” on Sunday as well that will feature in the independent film Walking With Herb.

"I've been a professional songwriter for many years in Nashville and trying to write that one song that's going to change my career. So I definitely related to Roger in that aspect," says Hunt. "I've lost a couple of friends in the past couple of years who were very young and died way too soon. And I've tried to dive into that feeling of loss I felt for them and their families felt when they lost them."

Hunt first saw Rent in 2006, in its final years on Broadway, with a friend and bandmate who was a "diehard Rent head," according to him, and while touring through New York City they took in the show together and it quickly became a fave of his as well. "Fast forward to 2019," Hunt says, "I'm actually playing in the first musical that I ever saw on Broadway."

His casting will remind fans of Adam Pascal, the original Roger in Rent, who was primarily a rock musician and auditioned on a whim with little to no stage experience. The rest, at the time, was history.

Hunt brought something up that should quell the nerves of those aforementioned diehard Rent fans worried about changes and updates to the script for the live televised event. He describes the staging and new choreography as a "souped up" Rent, but doesn't think fans should worry.

Primarily because Michael Greif, the director of the FOX production, also directed the original production off and the on Broadway. He was working with Rent composer Jonathan Larson on developing Rent when Larson unexpectedly and tragically died the week that Rent was supposed to start previews. "It's insane that a guy as young as [Larson] was," says Hunt, "was just so in tune to life and people and art. Just to be able to write such a beautiful piece of work at such a young age."

During the "previews" part of the artistic process or life of a musical, songs are cut and added, and the show is adjusted based on how the audience is responding. When Larson died, the show was kept in tact to honor his memory and his words. That said, "he would have continued to edit along the way as well," Hunt speculates, given the opportunity, and if anyone is sanctioned to make changes to this musical in 2019, it's Greif.

The Larson family is also involved in the show. Hunt says, "Julie Larson, Jonathan's sister who has been on set every single day, one of the most sweetest human beings I've ever met. She shared with us that she, over the years can. She's always seen her brother and every single character in the show and, and you know that's, to me, incredible that he put a piece of each character that he created." He adds:

It's actually, as Michael put it, it's better in some ways because he's gotten all of this time and over 20 some odd years of getting to like tweak things and tell the story the way that he's been wanting to tell it now has this platform through television to make this the best Rent that he can make. So that's, that's an exciting thing that I think Rent-heads can look forward to.

As an artist on the rise, I was curious as to whether or not the concerns surrounding "selling out" — which the characters in Rent are averse to — are still a part of the culture and relatable to creators today. "I think success happens to people when they least expect it," he says. "You can call it selling out or you can just call it life happening."

The evils surrounding "selling out" in Rent has a lot more to do with the time period. "It [was] a them against the world kind of mentality," Hunt says, "with the AIDS crisis and just nobody really understood what that meant." Selling out meant submitting to authority figures that didn't believe in, or worse, victimized these young artists. That itself is still a concern today, though with multiple platforms and diversity in the entertainment and art worlds, more stories are able to be told and success doesn't always have to mean selling out the way it does to Mark, Roger, Maureen, and Angel. That's part of Rent's legacy too, just by bringing this story to the Broadway platform.

"I love a lot of musicals," says Hunt, "but [Rent has] still always been my favorite because it's so raw and real, and emotional, and deals with love and loss, and friends who are more like family. I just love it. I think it's a beautiful, beautiful musical." With all of this Rent history and love taken into account, fans are sure to enjoy Sunday night's televised version.