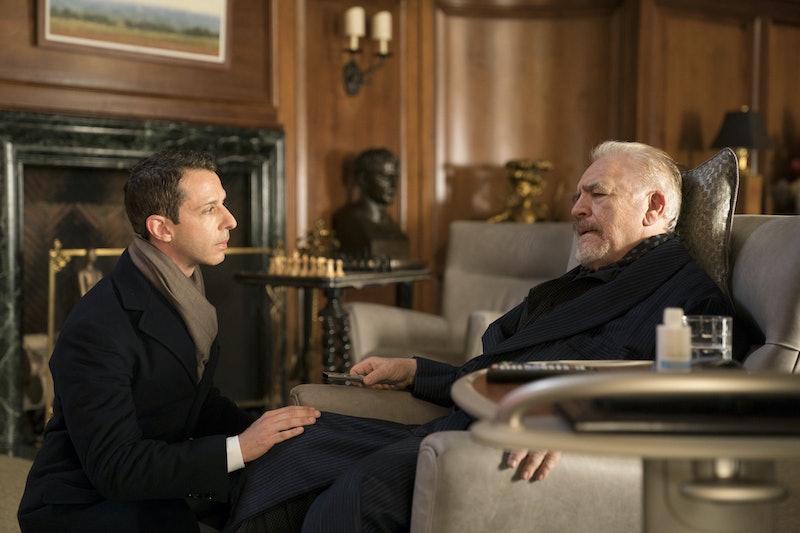 A story of a wealthy patriarch and the drama surrounding how he and his family deal with power, money, and their own relationships is a tale as old as time. But since the Roy family in Succession are part of a media empire, you may be tempted to think they're inspired by a real-life, modern media magnate and his family. However, Variety reported that the showrunners made it clear at the Television Critics Association (TCA) winter press tour in January 2018 that the Roys are not based on a real family. Even with knowing that though, audiences may find themselves making comparisons between Logan Roy and other well-known media moguls when it premieres on Sunday, June 3 at 10 p.m.

As Deadline reported in its coverage of the TCA panel, Succession creator Jesse Armstrong wrote a screenplay about Rupert Murdoch back in 2011. And while The New York Times noted that Armstrong's screenplay did lead to Succession, the story evolved and is no longer about Murdoch. Instead, when Armstrong joined forces with Anchorman and The Big Short director Adam McKay, the writer expanded his vision and looked at a number of rich families to create the Roys.

At the TCA panel, Armstrong said that the Roys are "a fictional family," Variety reported. Besides Murdoch, the Succession creator said that William Randolph Hearst, British publisher Robert Maxwell, and Queen Elizabeth were also loose influences because of the role this idea of "succession" played for those people. "There's loads of succession stories to draw on. We wanted to draw on all the good, rich stories there are about succession and about media and high politics," Armstrong said. McKay added, "It was interesting that the media families were the most interesting and the most dramatic."

In this show, Logan Roy (portrayed by the Scottish Brian Cox) is the founder of the media conglomerate Waystar Royco. His health is deteriorating and he has been married three times and has four children. The Roy children — Connor (Alan Ruck), Kendall (Jeremy Strong), Roman (Kieran Culkin), and Siobhan "Shiv" (Sarah Snook) — are all invested (some more than others) in the future of their father's company.

It's not unusual for media businesses to stay in the family. For example, the Australian-born Murdoch is the founder of News Corporation, Ltd. and he created Fox Broadcasting. As CNN reported, the 87-year-old is still overseeing his media empire. He has six children. The Australian Financial Review noted how the older four — Prudence, Elisabeth, Lachlan, and James — all have a stake in their father's businesses with Lachlan being the main heir.

According to Variety, Cox said at the TCA panel that he "didn't channel anybody really" in his portrayal of Logan. But the actor did tell The New York Times that the role made him think about the humanity behind these media moguls. "We look at Rupert Murdoch and we think we know him but we forget that he's a human being," Cox said. "That's what's interesting to me about these characters: They're flesh and blood."

The universality of dysfunctional families is something that Succession will highlight. Yet, when it comes to families with as much power as the Roys, the consequences are bigger. HBO president of programming Casey Bloys told The New York Times, "One of the things that Jesse pitched to me when he first talked about this was: Every family has dysfunction, right? But when your family has power, and specifically has power within the media, that dysfunction ripples across the nation and in some cases the globe."

So while some elements of the Roys will be familiar to anyone with a family, what will make the series so engaging is how much their family dynamic impacts the world.