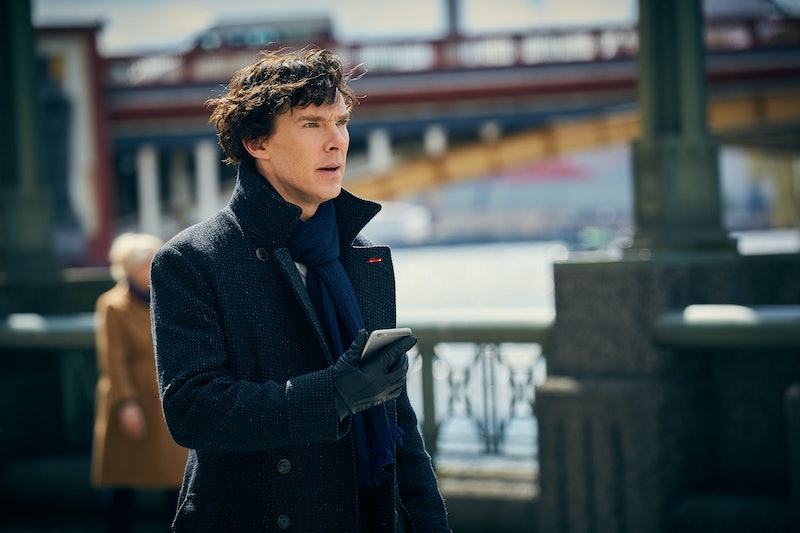 The year 2017 will be off to a cracking start when the new season of Sherlock premieres on Jan. 1. At long last, the world's first (and only) consulting detective is back to solve crimes and hand out withering insults. It's been nearly three years since Sherlock Holmes (Benedict Cumberbatch) and John Watson (Martin Freeman) had a full season of cases, and a one-off special last January did little to satiate the cravings of the show's ardent fan base. The first episode of Season 4 airs at 9:00 p.m. ET this Sunday and is titled "The Six Thatchers." Cumberbatch's Holmes is Arthur Conan Doyle's most famous character plus unlimited texting, so is "The Six Thatchers" based on an original Sherlock story?

Season 1's "A Study In Pink" is a play on Conan Doyle's "A Study In Scarlet." And Season 2's "The Hound Of Baskervilles" inserts a top-secret military testing facility into a classic Holmes case. In fact, most of the show's episodes are loosely based on or modernize elements of Conan Doyle's famous detective stories. The Season 4 premiere follows that tradition. "The Six Thatchers" appears to be based on "The Adventure Of The Six Napoleons," a story published in The Strand Magazine in 1904.

In "The Adventure Of The Six Napoleons," Inspector Lestrade solicits Holmes' help with a very confusing and apparently symbolic case. Several busts of Napoleon have been smashed in both public and private spaces. Each one comes from the same mold. Is the culprit a disgruntled history student? Do they have a vendetta against the memory of the famous French military strategist? The Sherlock Holmes canon is in the public domain. So, if you like, you can read the "The Adventures Of The Six Napoleons" online right now for free.

As its title suggests, the Sherlock take on this set of circumstances swaps out the political celebrity under attack. The BBC's synopsis of the episode asks why someone would be "destroying images of the late Prime Minister Margaret Thatcher," and hints that the the answer may be tied in some way to new mom Mary Watson's former life as a professional assassin.

During an interview promoting the show's upcoming new episodes at San Diego Comic-Con this past July, Cumberbatch cited the show's relationship to its source material as his "joy" in playing the character. He told Collider:

It’s great because there is a very strong reference point for any detail and keeping yourself in check with the canon. I go back to the books for specific references and for evolutions, which are there in the literature. It just comes across in every aspect of the writing, from how dark it gets to how funny it is to how rich the characterizations and relationships are."

This episode won't be the first time this case has been updated by the Sherlock team. A version of it previously appeared on John Watson's blog, an official site that supplements the show's canon with more of Holmes and Watson's adventures. So, with "The Six Thatchers," Sherlock adapts a rather obscure Conan Doyle story into what Sherlockians hope will be television magic.