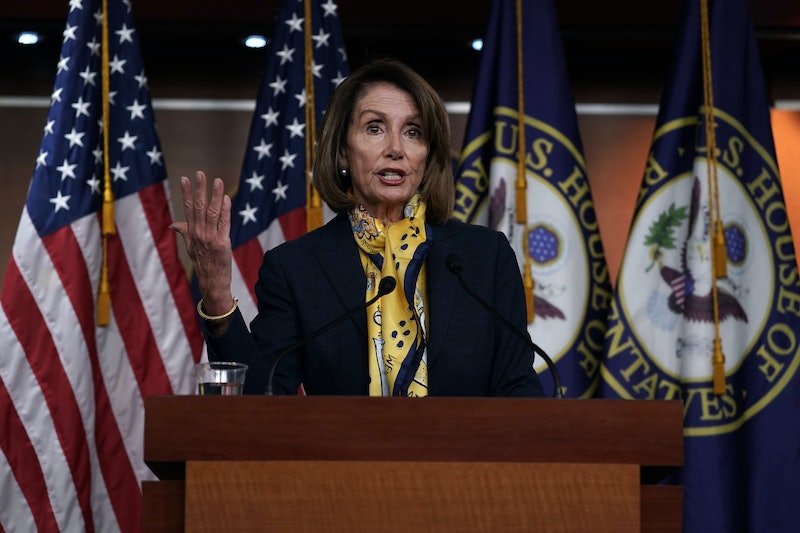 After more than a month, President Donald Trump announced on Friday that he and Congressional Democrats had made a deal to temporarily reopen the government — without any funding for the president's proposed border wall. During the shutdown, House Speaker Nancy Pelosi asked Trump to postpone delivering his State of the Union (SOTU) address until after the government reopened, and he eventually agreed. Now that the shutdown has temporarily ended, however, Pelosi said the SOTU has still not been planned, per CNN.

For the past week, Pelosi and Trump have gone back and forth on whether Trump would deliver his SOTU address on Tuesday, as planned. During the shutdown, which became the longest in American history, Pelosi sent Trump a letter asking him to either delay his speech or to present it to Congress in writing. Trump initially considered delivering the SOTU at an alternative venue, but ultimately decided that no other venue would be appropriate, per USA Today.

As of now, it is still unclear whether or not Trump will deliver his remarks on Tuesday, though Vox has projected that it probably will not happen that soon. In order for the president to be able to give his State of the Union address, the House and the Senate must pass a concurrent resolution to formally authorize a joint session of Congress — and Pelosi has not yet brought up this resolution. If she is opposed to Trump delivering the SOTU on Tuesday, Vox reported that Pelosi could make it impossible for him to do so.

House Minority Leader Kevin McCarthy, meanwhile, told reporters that he would like to see the SOTU take place as soon as possible, though he was unsure of whether or not sufficient security could be organized in time for a Tuesday speech.

For weeks, Trump and his fellow Republicans have faced mounting pressure to reopen the government as hundreds of thousands of federal employees worked without pay. Even as Democrats proposed bill after bill to reopen the government, Trump maintained that he would not sign off on any legislation that did not allocate funding to his wall.

On Friday, however, Trump announced an agreement that did not include any border wall funding — though he did announce his expectation that lawmakers would come to an agreement on border security while the government is temporarily open. If the agreement lawmakers reach does not include border wall funding, Trump has threatened to shut down the government again, or to declare a national emergency.