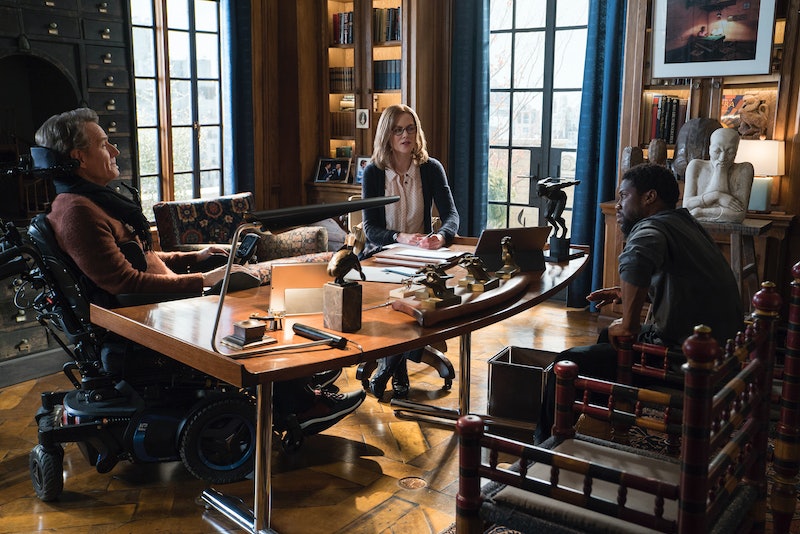 After the clock strikes midnight on Dec. 31, it's officially a new year, and it's the perfect chance to surround yourself with things that make you feel good and hopeful about the world. The Upside, which comes out on Jan. 11, could potentially be the feel-good movie you'll want to start off your 2019 with, if you want to feel inspired. Since The Upside is loosely based on a true story, it may just change your attitude about the world around you by reminding you that good things can happen to those who least expect it.

The two people in The Upside who have their lives transformed for the better are Phillip Lacasse (Bryan Cranston) and Dell Scott (Keivn Hart), and they start off as patient and caretaker, respectively, but end up becoming great friends. The Guardian reported that The Upside is loosely based on a true story, which first told in a 2001 French book called Le Second Souffle (The Second Wind), written by Philippe Pozzo di Borgo — the man on whom Cranston's character is based. According to Deadline, The Second Wind is a memoir about how he, a wealthy French businessman, had a paragliding accident that left him paralyzed from the neck down, and about how he transitioned into his new life.

The real man who became Pozzo di Borgo's caretaker-turned-friend is an Algerian immigrant named Abdel Sellou, who came to the job with a criminal record. In an interview with The Telegraph, Pozzo di Borgo called Sellou his "guardian devil," and their offbeat friendship became the subject of a hit French film, Intouchables, which came out in 2011. Then, in 2012, Sellou wrote his own memoir called You Changed My Life.

While The Upside changes a great deal about the original story of Sellou and Pozzo di Borgo — it's set in modern-day New York City, for starters — it seems like the new film maintains a realistic portrayal of the pair's connection. In the 2012 interview with The Telegraph, Pozzo di Borgo explained what happened after he hired Sellou, saying, "He didn’t feel sorry for me — he was irreverent, cheeky and had an outrageous sense of humor. I suddenly found I was enjoying life again, feeling like I didn’t know what was coming next."

In the trailer for the U.S. version of Sellou and Pozzo di Borgo's story, you get to see the re-telling of how Phil and Dell meet, with Dell bluntly asking, "Don't your arms work?" It seems that the new version of the heartwarming story sticks to the original dynamic between the real people quite well, even if it changes details.

According to The Telegraph, the real people depicted in The Upside eventually parted ways, with Sellou returning to Algeria where he settled down and started a family. A 2017 interview published on the AnnaChromy.com reveals that Pozzo di Borgo now lives in Essaouira, Morocco. Even if they don't see each other every day anymore, the real people who inspired The Upside seem to have bonded over their shared misfit-hood, and zest for life.