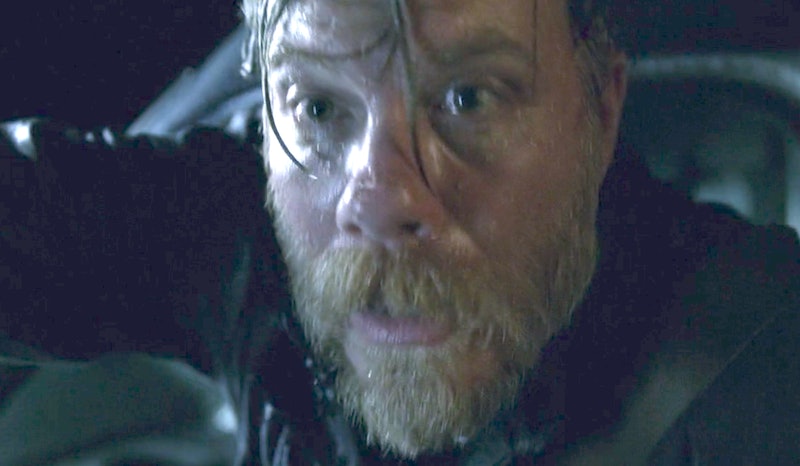 If you physically jumped when that dead van guy turned out to be alive on Manifest, you're not alone. His lunge for Michaela and wolf-like growling made Cal's picture come to life, and it was terrifying. According to the synopsis for the Feb. 11 episode, the van guy's name is James Griffin and he's bad news for the passengers who are trying to use the callings to do good.

That's because James is a bad guy, and he'll show what happens when just anyone can travel through time. See, if you remember back to Episode 12, Ben and Grace listened to the radio on their way to find Cal, and the radio host was talking about the very armored vehicle that Michaela saw dragged up from the east river. The report said the driver was the primary suspect in a double homicide and that he'd also stolen an armored car before driving it into the river.

Everyone, including Michaela and the police, assumed the driver would be dead after four days underwater, but the promo for the next episode reveals that James is just like the 828 passengers and Zeke. He came back from the "dead," likely thanks to a storm.

The police captain even mentioned as much when he asked Michaela and Jared to oversee the truck recovery operation. He said that divers hadn't been able to pull the truck up sooner because of the electrical storm, and then it... mysteriously disappeared.

"How do you lose a utility vehicle in the river?" Michaela asked. Oh, you know, when it travels through time. It's worth noting the van was also from Schnitman Electric, so perhaps it had something to do with causing the electrical storm? One fan suggested as much on Twitter.

In any case, Ben was super wrong when he turned off the radio broadcast and said, "At least for once it's not about Flight 828." It's definitely tied together, which isn't good because James is a criminal. He is suspected of killing two people and stealing a truck and now he's in the possession of callings just like the 828 passengers and Zeke, which puts them all at risk.

James ominously told Michaela in the Episode 15 promo, "Your thinking has been far too narrow, these callings are capable of so much more." And there's also a shot of Michaela demanding that he tell her what he saw, and a flash of what looks like a bomb in Times Square.

This guy is bad news, and the synopsis doesn't offer much hope.

"When Michaela meets the mysterious James Griffin during a police investigation, the passengers learn what happens when the callings fall in the wrong hands."

What is James going to do with his callings? There are only two episodes left, so you know something big is coming. But, at the same time, Marc Menchaca, who plays James, is listed as a guest star for Episode 15, so maybe he'll disappear after that one and stop causing harm. After all, he is a suspect in a double homicide, so perhaps he goes to prison.

One other thing tied to James that needs to be addressed is the 75 million dollars the truck was carrying when it went down. Remember when Cal drew a stack of cash on a table? Perhaps that drawing was about the armored car recovery, as Reddit user mikewest000 suggested. It definitely seems like James and this electrical truck are linked to the Flight 828 passengers and Zeke, since he had the vision of the wolf attacking Michaela. As Cal once said, it's all connected.