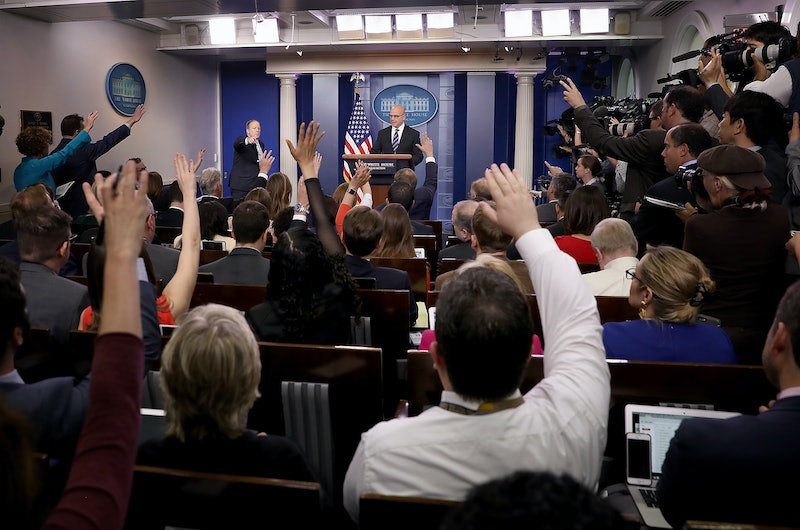 On Monday, Twitter blew up with the news that a prominent conspiracy theorist and InfoWars reporter got White House press credentials. Jerome Corsi, who spent years spreading the debunked theory that Barack Obama wasn't born in America, tweeted out an image of himself in the White House, proclaiming "We have WH PRESS CREDENTIALS." InfoWars published an article echoing Corsi's claim, calling the news "an epic blow to the mainstream media's control of the narrative." If the Trump administration has indeed granted Corsi a permanent seat at White House press briefings, it indeed would be a sad and shameful development — but it's not clear that this is actually what happened.

Shortly after Corsi tweeted the image, several other Washington reporters chimed in and claimed that Corsi hadn't been given permanent credentials, but rather a temporary, one-day pass. Mike Warren, a reporter for the Weekly Standard, said that he saw Corsi's press pass, and that it's a "temporary day pass almost anyone who publishes can get." Bustle has reached out to the White House for clarification on Corsi's credentials.

To be sure, the fact that Corsi is even allowed in the press briefing room at all is nothing for the White House to be proud of. This is a man who wrote the book on birtherism. That's not an exaggeration: Corsi literally wrote a book called Where's the Birth Certificate?, in which he argued that Obama isn't an American citizen and thus isn't eligible to be president. (In a sad twist for Corsi, Obama released his long-form birth certificate three weeks before the book was published.)

Corsi is now the Washington, D.C. bureau chief of InfoWars, a website that has published stories alleging, among other things, that the September 11 attacks were an inside job, that the Sandy Hook shooting was a hoax, and and that "feminism is designed to end humanity," in the words of one headline.

All of this should be disqualifying for anybody applying for access to White House press briefings, even on a temporary basis. This is doubly true given that Donald Trump himself spent years fanning the flames of birtherism. Nevertheless, if Corsi did indeed only obtain a day pass, that's not nearly as big of a deal as if he'd been granted permanent access to the White House.

This episode brings to mind a similar incident from January, wherein InfoWars chief Alex Jones announced that his company had "already been offered" White House credentials. Shortly thereafter, however, White House Deputy Press Secretary Sarah Huckabee Sanders denied the claim, saying that Jones "is not credentialed for the White House."