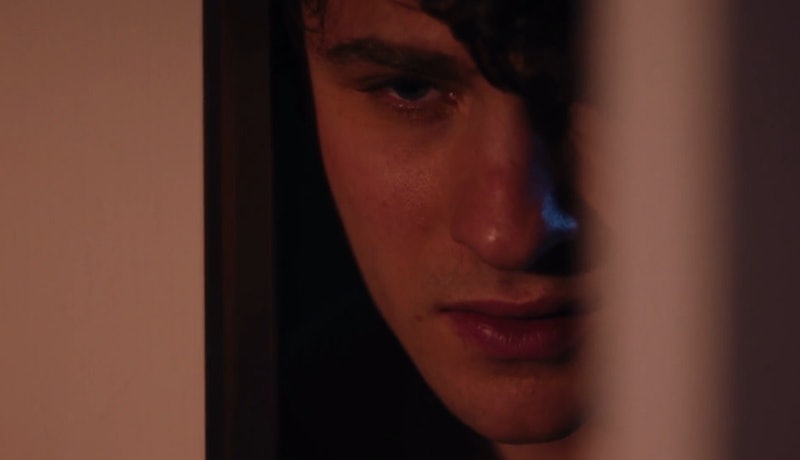 The plot of Lifetime's latest thriller, The Wrong Son, which premieres Sunday, June 17, is one you've probably heard before: loving family welcomes home the son they thought was dead, only to realize it's not their sweet baby boy at all, but a stranger, hell bent on seeking revenge. As familiar as it sounds, is The Wrong Son based on a true story? While the movie doesn't seem to have any direct ripped-from-the-headlines inspiration, that doesn't mean very similar stories haven't played out before, both on screen and in real life.

According to Lifetime's official synopsis of The Wrong Son, one family has suffered more than their fair share of tragedy. Thirteen years ago, young Matt drowned while swimming at the beach, and his mother Sarah, played by Olivia d'Abo, never truly forgave herself. More recently, Sarah's husband — Matt's father — died in a mysterious car crash. Shortly thereafter, Matt appears, as though back from the dead. But when his brother, Ian, winds up injured in another car accident, suspicions are raised about Matt's true identity, and whether or not he's the cause of the accidents.

Maybe the most famous real-life version of this story is that of Nicholas Barclay and Frédéric Bourdin, which was chronicled in the 2012 documentary The Imposter. In its review of the film, GQ writes that on June 13, 1994, 14-year-old Barclay tragically went missing while playing basketball near his home in San Antonio, Texas. Three years later, Frédéric Bourdin managed to convince the Barclay family that he was their long-lost boy.

The Telegraph reports that eventually, after nearly four months, local investigator Charlie Parker was able to unveil Bourdin as an imposter. Known as "The Chameleon," Bourdin, who was originally from France, had been impersonating different missing children around Europe before deciding to take on Barclay's identity.

Although The Wrong Son isn't officially based on The Imposter or the story behind it, this is hardly the first time a Lifetime film has borrowed from the ol' prodigal-child-returns-home-but-is-actually-a-sociopath trope. One similar thriller premiered in May, actually. The Wrong Daughter isn't based on a true story either, but it does feature a daughter who was previously given up for adoption mysteriously resurfacing in her biological mother's life. But of course, as the synopsis puts it: "She's an impostor who will do anything, even kill, to get the mother's love she never had!"

But wait — Lifetime's love for this twist goes back even further. The Wrong Child, which premiered in 2016, tells the story of married couple Renee and Charles. When Charles' long-lost "son" appears on the scene, Renee and her daughter hope to welcome their new stepson — until it turns out he's a hardened killer.

Lifetime isn't the only network to play with this chilling concept for dramatic effect. Just this past season on The CW's Riverdale, the Cooper family welcomed Alice and J.P.'s child who had been given up for adoption two decades before, only to discover that he wasn't their son at all. And the Van der Woodsen-Rhodes family on Gossip Girl went through a similar ordeal with Charlie/Ivy and her money-grubbing schemes.

Even ABC dabbled with identity theft with The Family, a 2016 drama that ran for just one season. Anna Rose Iovine of Romper points out the similarities between The Family and The Imposter, but also notes that, like The Wrong Son, The Family isn't actually based on one specific case of impersonation.

The child-impersonator stories are starting to border on cliche (or, okay, they have completely crossed over into that territory), but that doesn't mean they still aren't entertaining as hell to watch. And when it comes to drama and intrigue and turning the traditional picture of family safety and stability on its head, The Wrong Son certainly seems like it'll deliver.

More like this
At 28, Lesley Manville Was Acting, Picketing, & Singing Kate Bush Songs
By Olivia-Anne Cleary
What’s New On Netflix: 'Never Have I Ever' & 'Indian Matchmaking' Return
By Arya Roshanian
The Sean Bean Intimacy Coordinator Controversy, Explained
By Sam Ramsden
Everything To Know About The HBO Max & Discovery+ Streaming Service Merger
By Brad Witter
Get Even More From Bustle — Sign Up For The Newsletter