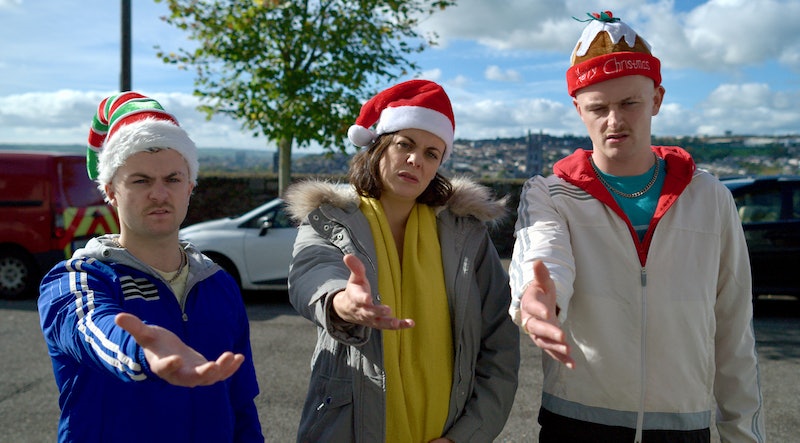 The 2016 Irish comedy film The Young Offenders enjoyed it's very own television spin-off this year, with the first series of the show airing on BBC Three. Last month, fans of the franchise were delighted to learn the show would be returning for a Christmas special, but is The Young Offenders a true story?

Well according to The Journal, both the film and television series are indeed based on true events. The fictional reimagining is based on the largest cocaine seizure in the history of the Irish state, which took place back in 2007. The real life story began when a small boat got into some major difficulty on the coast of Cork — and as the two men on board attempted to keep afloat, the 1.5 tonnes of cocaine they had been carrying onboard began to flow into the sea. The men were then spotted whilst making their way back to the shore, and eventually charged in court with possessing cocaine for sale or supply.

This slapstick incident is what inspired The Young Offenders franchise, and according to the BBC, the series explores the coming-of-age adventures of lovable rogues Conor MacSweeney (Alex Murphy) and Jock O'Keefe (Chris Walley).

In the special festive episode, which is now available to watch on BBC Three, the main cast are joined by actor Robert Sheehan, who is perhaps best know for his work on the E4 series Misfits and Sky Atlantic's Fortitude. As reported by MSN, The Young Offenders star Walley is most pleased with Sheehan's participation in the Christmas special. When discussing working with the 30-year-old, he said "He’s lovely to work with," and continued "But it’s even better because growing up watching shows like Misfits and Love/Hate you never think you’ll be in scenes with him."

The first season of the comedy premiered in February this year, and managed to pick up a glowing reception from both viewers and critics along the way. One review from Aoife Kelly in the Irish Independent praised the TV show's ability to improve on the original 2016 movie. She said: "It takes the best of the movie and builds on it," whilst another review from Bruce Dessau compared the show to the Channel 4 series Derry, which also happens to be set in Ireland.

As previously reported, the series acts a spin-off from the original 2016 movie of the same name. According to Rotten Tomatoes, the plot of the The Young Offenders centres around best friends, Conor and Jock, two inner-city teenagers from Cork. The pair share very similar interests, and are no strangers to a life of petty crime — and after a drug trafficking boat capsizes nearby, word gets out that a bale of cocaine is still missing. The boys then set out to find the missing bale, which they hope to sell and in turn escape their troubled lives.

Similarly to the accompanying TV series, the film also enjoys some rave reviews from critics, and currently holds an impressive 100 percent approval rating on Rotten Tomatoes.