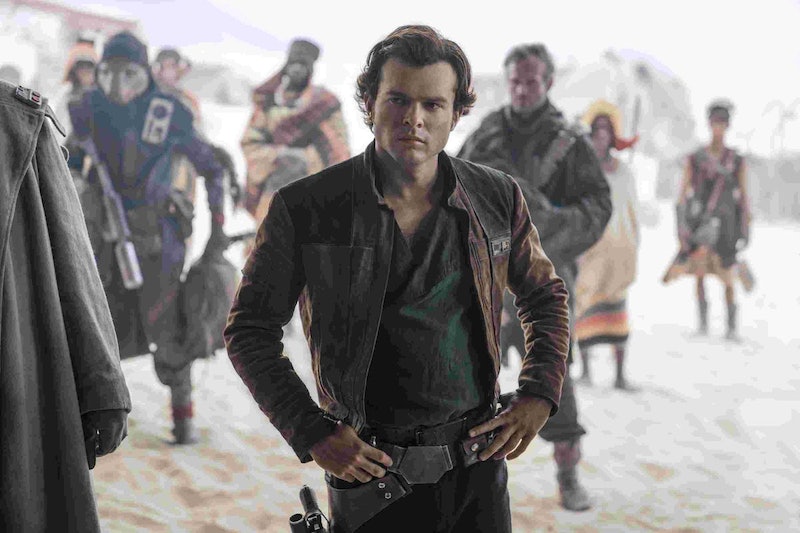 With Solo: A Star Wars Story hitting theaters on May 25, focusing on anything but Donald Glover playing Lando is getting more difficult with each passing day. If you're already planning your moviegoing experience to the newest Star Wars movie, know that you don't have to stay for a Solo: A Star Wars Story post-credits scene. Even though both Lucasfilm and Marvel are subsidiaries of Disney, the Star Wars movies haven't adopted the MCU's tradition of including post-credits scenes. That means that Solo simply ends before the credits roll, leaving you free to exit the theater. But let's face it, you'll probably end up just staying in your seat for awhile to soak it all in.

After all, Solo provides Star Wars fans with Han Solo's (Alden Ehrenreich) origin story, covering everything from the first time he met Chewbacca to the way Han got his name. The Millennium Falcon, of course, plays a major part in the movie, too, and that's where Lando Calrissian (Glover) comes in. Before Han came to own the famous spaceship, Lando used it as a swanky party hub. Seriously, if you look at the featurette in which Glover gives viewers a tour of the Falcon, you'll wish you could hop in a rocket ship to party at Lando's house. While Glover gives his tour of the ship — which is complete with overhead mood lighting in the bedroom quarters — the Atlanta creator and actor says, "This ship has probably never looked better than when Lando kind of had it."

Probably the best part of Lando's Millennium Falcon is the fact that its closet houses every kind of cape that the smuggler could want. As Glover says in the video, that includes an "everyday cape, sister's wedding cape, [and an] intergalactic Presidents Day cape." It's an impressive cape collection that Lando has aboard his ship — before Han Solo took over, of course — and while it shows that Lando may have the most swagger of any Star Wars character to date, a different tour of Lando's ship may have revealed a lesser known characteristic about Han's frenemy.

Io9 published another tour video which shows Lucasfilm executive Pablo Hidalgo touring Lando's ship, and it features a strange artifact on board that isn't a special cape for a made-up space holiday (though the capes are undeniably cool). Among Lando's treasures, Hidalgo points out that the ship carries models of a podracer, the Falcon, and Cloud City. While pointing to the Cloud City model, Hidalgo says, "I won’t get into any details but you’ll probably recognize what he has in his future."

As you may know, Cloud City was built in an anti-gravity pod (as seen on Lando's ship) above the planet Bespin in The Empire Strikes Back. Both Lando and Cloud City play major parts in Episode V, and the fact that Lando has a model of the pod aboard the Millennium Falcon might mean that he had plans to build the city — which he administered in The Empire Strikes Back — long before it was built. As io9 points out, the model pod could even mean that Lando has psychic abilities — or maybe it's just foresight.

Whether or not Lando had plans to create the municipality above Bespin (which Darth Vader later captures) remains to be seen. Since so many people have called for a standalone movie featuring Glover as Lando Calrissian, it seems like Solo could be building the foundation for that movie with the models on Lando's ships. Perhaps the solo Lando movie (not to be confused with the movie Solo, of course) would show how the character eventually became the administrator of Cloud City.

If only Star Wars did have post-credits scenes, because then Solo might be able to tease a future Lando-centric movie and make everyone extremely happy.