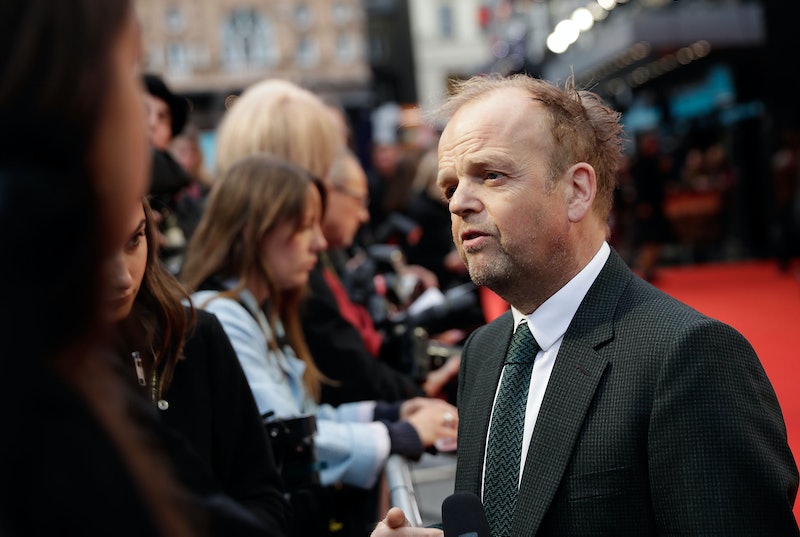 Actor Toby Jones is fast becoming an icon of British stage and screen. Especially adept at the role of flawed hero, Jones has played Truman Capote, Alfred Hitchcock, and, y'all, did you know he is the voice of Dobby off Harry Potter? Wild. All this talent and hard work makes him a very eligible individual, but is Toby Jones married?

Yes guys, he is happily married to Karen Jones. The pair married back in 2014 after a stonking 25 years together, the Guardian reports. They also have two children, daughters Holly and Madeleine. Karen is a criminal defence lawyer and the family live in South London. Speaking to the Irish Times, Jones shared that, strangely, he and his wife have something in common work-wise: "We are both involved in the business of biography," he said.

Despite finding this common ground, it's still interesting that Jones chose to marry someone who doesn't work in the acting world, as his life has been so much moulded by it. In fact, having grown up the son of two actors and sibling of two more actors, he low-key wanted to be anything but an actor. He spoke to the Guardian about his unexpected career turn. "Just like any child, you go, 'Do I want to join the family firm?' And I thought, 'No, I want to do something different.'"

Even when he was in actual drama school, he really thought acting wasn't for him. Jones found himself more interested in the back stage stuff, including the artistic direction, the Guardian reports. However, it was when he went to study physical theatre at the world famous École Internationale de Théâtre Jacques Lecoq in Paris that things changed for him. The physical side of things helped him realise this was his destiny.

Jones has been acting for years now, but the film that really got his name up in lights was his starring role as legendary author Truman Capote in Infamous. That was back in 2006, and his rise has been meteoric ever since. In 2016, he starred in the re-imagining of the iconic Dad's Army, in which he played the commander Captain Mainwaring. He also appears as one-half of the starring duo in BBC's Detectorists, which has become more and more popular year on year.

His latest role is in Don't Forget The Driver, a TV show in which Jones has two roles: writer and actor. Don't Forget The Driver is the story of a single father who works as a bus driver and is a bit fed up with life. Estranged from his family, everything is changed by one chance meeting. That is the discovery of a teenage asylum seeker stowed away on his coach. So, this comedy is one with a difference, as it tackles contemporary political issues. Speaking to the British Comedy Guide, Jones explained the Don't Forget The Driver team couldn't ignore current affairs:

"We wrote it as a comedy, but like everyone who's trying to write anything now, whether it's a novel, a play, or a piece of comedy, you're affected by what's going on in the world. We didn't want to shoehorn politics into the show - but when you're dealing with a coastal town the show becomes political whether you like it or not".

The show has been made for the BBC and will be in six parts.