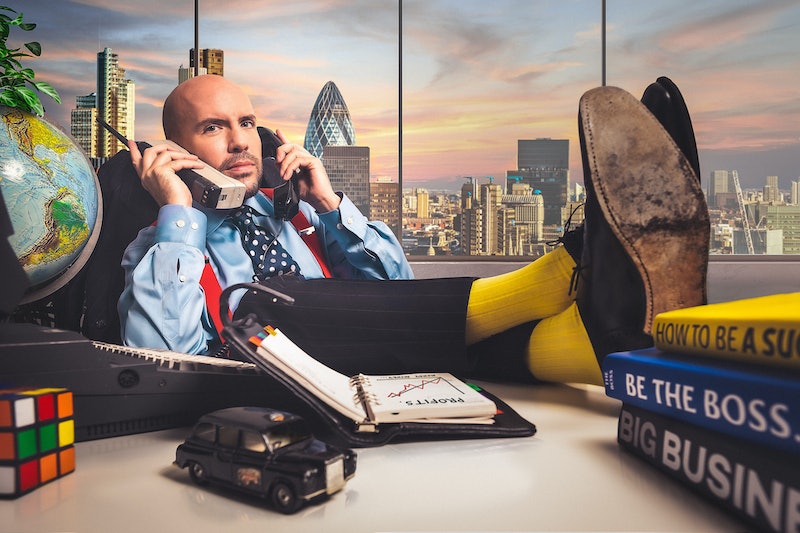 Comedian Tom Allen has seen his television career go from strength to strength in recent years following his appearances on the BBC's Live at the Apollo and Bake Off: The Professionals — and it appears things are only looking up for the English funnyman, because Allen was recently announced as the brand new host of BBC Two's The Apprentice: You're Fired. But is Tom Allen touring in 2019? Here's everything fans of the comedian need to know.

According to his official website, Tom currently doesn't have any scheduled gigs in 2019. I have reached out to the comedian's representatives for comment, and will update with any new information once it becomes available. However, Allen's official site does state that tour dates are set "to be announced soon," so fans might not have too long left to wait before he hits the road again. Fingers crossed.

As reported by The Sun, Allen is set to take the reins of The Apprentice: You're Fired, following Rhod Gilbert's decision to quit the BBC Two spin-off. The Welsh comedian first began hosting You're Fired back in 2016, following Jack Dee's stint on the show. However, Allen will now front the Apprentice after-show to offer his hilarious take on this year's boardroom shenanigans.

If you're unfamiliar with the You're Fired format, the spin-off airs weekly at 10.05 p.m. on BBC Two, immediately after The Apprentice main show. Each episode features a lineup of celebrity guests and business experts, who along with Allen, dissect the latest boardroom action — and interview the most recently fired candidate. Speaking of his latest TV gig, Allen told the BBC, "I’m excited and humbled to be joining this wonderful, much loved show as host. I’m looking forward to analysing, satirising and, dare I say, celebrating the many 'interesting' choices the candidates make during their Apprentice journey whilst gaining valuable insight into the business world."

The Controller Entertainment Commissioning at the BBC, Kate Philips, revealed that she is very much looking forward to Allen's "unique take" on the Apprentice after-show, whilst paying tribute to former-host, Rhod Gilbert. Speaking to the BBC, Philips said, "I’d like to thank Rhod for his fantastic three years in the hot seat, but the show will be in very safe hands as Tom will bring audiences at home and in the studio his own unique take on the weekly tasks and what happens in the Apprentice boardroom."

As the Radio Times reports, The Apprentice series 15 will kick off on Wednesday, October 2, at 9 p.m. on BBC One, and Lord Sugar will once again set out on a journey to discover his next business partner. In addition to a fresh lineup up of budding entrepreneurs, the new series will also welcome back Lord Sugar's no-nonsense advisors, Karren Brady and Claude Littner, both of whom will be on hand to offer their professional expertise.

So, along with You're Fired, it appears fans of the long running reality-competition have a whole lot of boardroom action to look forward to, and I cannot wait to see which contestants stand out amongst the crowd.