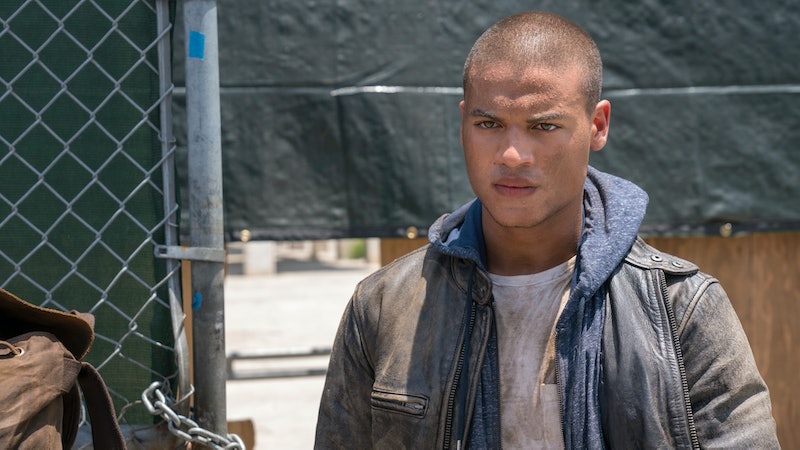 Runaways is back for Season 2 and now that the team has actually, you know, run away... expect them to run into a lot of new faces. Like Topher. But before you start picking sides, just that know that Topher in the Runaways comics isn't as charming as he seems. According to the official Marvel press release, "Topher is a crafty runaway who schools our kids on new levels of street game. The consummate survivor, Topher knows how to read the room and win friends." He's also, yes, based on the character from Marvel comics.

Fans of the comics may have noticed that one major member of the team has not yet joined — but that's Victor Mancha, not this kid. Topher is a minor character who joins the team briefly. He's sure to appeal to their teen angst, because Topher has been sixteen for a while. That's right, he's a vampire! Seriously! Born at the turn of the 20th century, by the time he meets the Runaways Topher had developed a knack for being in the wrong place at the wrong time financially and was pretty down on his luck. He played the stock market before the Great Depression, and got caught up in the Dot Com bubble in the new Millennium.

After that, Topher acquired some minions and turned to crime. It's then that he met the Runaways, and lied his way into joining their ranks by telling the others that his minions were his evil parents who forced him into a life of crime. While staying with the group, Topher tried to flirt with both Nico and Karolina (nice try) and ultimately tried to feed on them — maybe for dinner, maybe so that they could join him in eternal life. However, Topher didn't know that Karolina's blood was not human blood, and it poisoned him. Bye!

Vampires haven't exactly been established in the Marvel Cinematic Universe, so it's unclear as to whether or not that aspect of Topher's character will be incorporated into the Hulu adaptation. There is at least one very famous TV vampire in the cast (James Marsters), so that could get interesting.

What's likely the most important takeaway from Topher's comic book history is that he likely has an ulterior motive for wanting to join the group. If he starts spinning a tale about his tragic backstory, don't believe him.

Could other characters from the comics join in Season 2? As far as Marvel goes, Runaways isn't as extensive lore-wise as, say, Spider-Man, Bucky Barnes, or even the Guardians of the Galaxy. The series, which was created by Brian K. Vaughn, only has five volumes — and Volume 5, written by Rainbow Rowell, is ongoing.

However, there are still more side characters, antagonists, and new team members that the Hulu series can incorporate from the page. Topher may only be in about five issues of the Runaways comics, but he made enough of an impact, so hopefully that means more characters will show up later! Runaways may be in Season 2, and this may be a major cliché, but the adventure is truly just beginning.