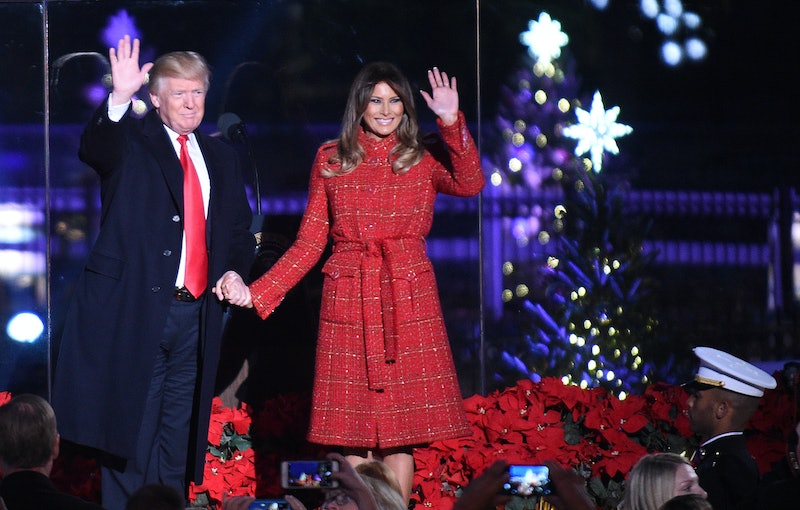 Unable to agree on a spending bill, Senate Majority Leader Mitch McConnell adjourned the Senate on Saturday with no plans to return to legislative business until Thursday. That means the partial government shutdown that left an estimated 420,000 employees working without pay while another 380,000 were furloughed at midnight Friday will likely continue through the holiday. But the government shutdown has done more than bring a number of federal departments to a screeching halt, it's also thrown a wrench in President Donald Trump's holiday plans. So, is Trump going to Mar-A-Lago for Christmas?

In light of the government shutdown, President Trump announced he'd called off his traditional holiday celebrations at Mar-A-Lago resort in Palm Beach, Florida, on Saturday. "I will not be going to Florida because of the Shutdown," the president tweeted. Instead the president said he would be staying in the White House, presumably to continue negotiations over a spending bill with congressional leaders.

But what of the first lady? According to CNN, Melania Trump departed for Mar-A-Lago on Friday in hopes that a last-minute spending deal passed by the House would keep government funding from lapsing. Now that Trump has opted to stay in Washington during the shutdown, however, the first lady is expected to return to the White House.

"Due to the shutdown, President Trump will remain in Washington, D.C. and the First Lady will return from Florida so they can spend Christmas together," CNN reported White House Press Secretary Sarah Huckabee Sanders said in a statement released late Saturday.

According to the Hill, the president had planned to continue his family's tradition of celebrating the holidays at Mar-a-Lago with a 16-day trip initially set to kick off Friday. "It has long been the [Trump] family's tradition to spend their Christmas holiday at Mar-a-Lago," Stephanie Grisham, spokesperson for the first lady, told CNN on Friday when announcing that Melania would travel ahead without the president due to looming budget deadline. "Her plans to travel with her son to their Florida home for his winter break have not changed this year."

Bustle has reached out to the first lady's office for comment regarding her expected return to Washington.

The Trumps have reportedly been spending Christmas at Mar-A-Lago for at least a decade, according to The New York Post, which claims the tradition began — and continues — at Melania's request. According to the paper, the family takes in a Christmas Eve Mass at Episcopal Church of Bethesda-by-the-Sea in Palm Beach and sits down together for dinner on Christmas.

A partial government shutdown began at midnight Friday after weeks of President Trump threatening to allow government funding to lapse if he didn't receive funding for his border wall. Indeed, while congressional leaders appeared set to pass a bipartisan spending measure earlier in the week, Trump announced Thursday that he'd refuse to sign the measure — which had, at the time, already passed the Senate — as it did not include the billions of dollars he wanted for his border wall. In a last-minute effort to avoid a shutdown and appease Trump, House Republicans pushed through a stopgap funding measure that allocated $5.7 billion for Trump's border wall but ultimately failed to gain traction in the Senate, according to CNN.

In an interview with Fox News Sunday, acting White House Chief of Staff Mick Mulvaney said the president was unwilling to back down from his demand for border security funding and signaled that the shutdown could go on into the new year. "I don't think things are going to move very quickly," USA Today reported Mulvaney said. "There's a chance this could go into the next Congress."