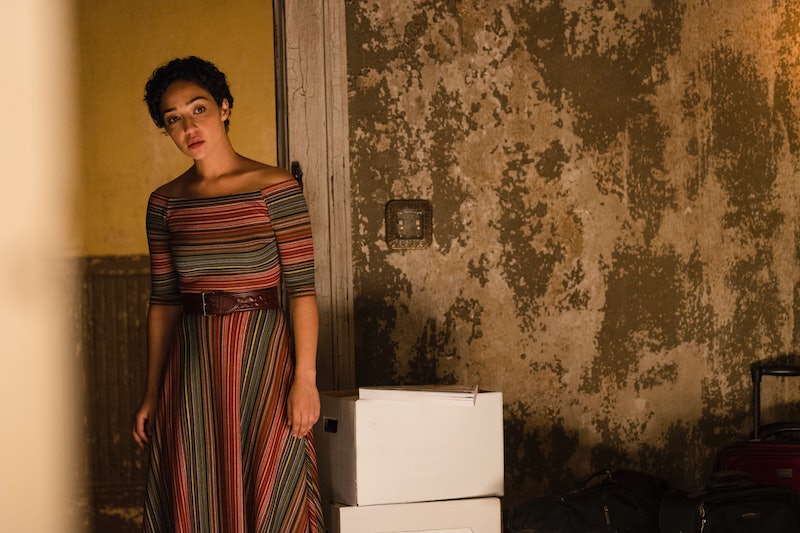 Spoilers for the Season 2 finale of Preacher follow. Although the Saint of Killers has been haunting Tulip for a large part of Season 2, it wasn't the killer cowboy that did her in. Instead, Tulip is killed on Preacher by the Grail operative Featherstone during the Season 2 finale, "The End Of The Road." Tulip discovers that the Grail has been spying on them all, but doesn't make the connection quick enough that her friend "Jenny" is behind it. When Tulip goes to say goodbye to Jenny and realizes that Jenny is no friend at all, Featherstone drops the act and shoots her. The shooting leads to Jesse returning to Tulip and Cassidy, but he's unable to save her, and won't let Cassidy turn her. She seems to be very much deceased in the final scene, tet, as long as the AMC series is renewed for Season 3, you should expect to see Tulip O'Hare breathing once again.

After Jesse's Genesis power doesn't work in keeping Tulip alive, Jesse refuses to let Cassidy turn Tulip into a vampire. Rather, Jesse takes Tulip's body to Angelville. Even if you have never read the comics that Preacher is based on, Season 2 gave viewers enough information to deduce that Jesse is going there to have his grandmother resurrect Tulip. But as his grandmother said in the opening of "The End Of The Road," when a young Jesse asked her to bring back a chicken he killed, "Everything has a price." So there is sure to be hell to pay if she successfully brings Tulip back to life in Season 3.

Jesse further proves that to be true when after Cassidy says he hates him, Jesse responds, "You hate me now, just you wait. Just you wait." Even without knowing what she'll want in exchange to save Tulip, Jesse's grandmother, Miss Marie L'Angell, is an evil woman in the comics and there will most likely be some soul bartering involved. After all, along with selling souls and performing resurrections, she used to torture Jesse with a watery coffin in order to make him denounce his father's side of the family, as shown in the eleventh episode of Season 2, "Backdoors."

In the comics (spoilers follow), the circumstances that lead Jesse back to his evil grandmother are different than the show. Marie L'Angell captures Jesse and Tulip and orders her henchman, Jody, to shoot Tulip. Then, rather than Marie resurrecting Tulip, God is the one to bring her back, helping both Jesse and Tulip escape Marie L'Angell's evil clutches and Angelville for good.

With Jesse voluntarily returning to Angelville to save Tulip, the TV series is going in a slightly different direction than the comics. But, like in the comics, God could be the one to save the day instead of Marie L'Angell. Since the Season 2 finale ended with God seemingly watching Jesse, Cassidy, and Tulip through his dog suit eye, there's a chance he'd let Tulip live with no soul trading or other awful consequences. But viewers will most likely get to see Marie L'Angell in all of her terrifying glory before that could happen.

So while Tulip is most definitely dead at the end of Season 2, it seems fairly certain that she will be brought back to life in Season 3. But whether it will be forces of good or forces of evil that resurrect her will remain a divine mystery until Preacher gets renewed and returns for Season 3.