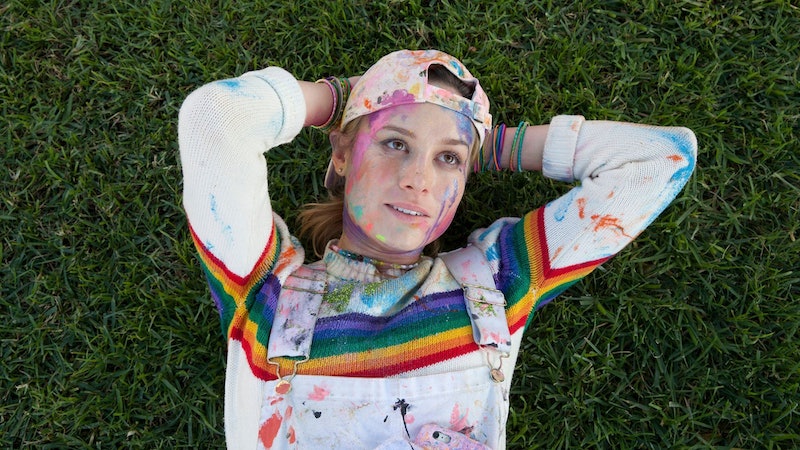 Brie Larson is having her Captain Marvel moment in 2019, but what's also exciting is fans are finally getting the chance to see her directorial debut. Unicorn Store, which Larson also stars in, premiered at at the Toronto International Film Festival in 2017 but is just now becoming available on Netflix April 5 — likely timed to tag along her major box office smash. Unicorn Store isn't actually based on a true story, but it does have roots in real childhood dreams.

While Captain Marvel is based in superhero mythos, Unicorn Store has an entirely different fantastical reality. Kit (Larson) is a colorful art student who gets kicked out of school for her misunderstood creativity and takes a boring temp job at a PR firm. She feels rejected by the world, until she gets a mysterious invitation to The Store, where The Salesman (Samuel L. Jackson) offers her the unicorn she's always wanted. But she has to be sure she wants it first, which leads Kit into some soul-searching and awkward conversations with her family and friends. Spoiler alert: unicorns aren't exactly real, but that doesn't mean this story is entirely fictional.

Samantha McIntyre, a successful TV writer who has worked on FX's Married and HBO's Bored to Death among other pilots, series and films like Fraggle Rock, told Bust she first wrote the screenplay for Unicorn Store in 2009.

"Everyone always asks if I was obsessed with unicorns and I actually wasn’t," McIntyre told the magazine. "My deepest, strongest wish as a child, was that Hello Kitty would come to life. It was always this very bittersweet wish because I was a smart enough child to know [it couldn't happen]."

Instead of actually getting an invitation to a unicorn store (or even a Hello Kitty store which, FYI, are totally real), McIntyre sees the movie as being about the "deepest dream you had as a child," she told Bust. "if you still are clinging to that as a grownup. And if someone came to you and said, 'Actually, I could make that come true.' what would you think?"

For Kit, that dream became a unicorn. "It’s symbolic of that magical dream we all have," McIntyre continued. "I mean, not to be too corny but like, through the course of writing the movie and making the movie I feel like I got my unicorn dream."

Unicorn Store has gone through a few iterations — at one point, Rebel Wilson was set to play Kit with Miguel Arteta directing, McIntyre revealed. Larson originally auditioned for an earlier version of film, but didn't get the part.

"But her and I had lunch, just the two of us, and it was so fun and I loved her," McIntyre told the publication. "I remember after the lunch I told one of our producers, 'Brie Larson is a delightful weirdo.' She’s just — she’s like Kit. I would’ve loved to have had her in that part from day one."

Fatefully, that version of Unicorn Store never got made and when McIntyre was looking for a new director, she thought of Larson, because she "felt like she really connected to the material," the writer told the magazine.

Larson previously directed two short films (The Arm and Weighting), but Unicorn Store is her first feature. While at TIFF, she told IndieWire she connected with Kit’s "uniqueness, and her inability to let go of her uniqueness."

“Obviously, the film is a little off-kilter, and a little surreal, but I think that the world we live in is surreal,” Larson told IndieWire. “We should all be allowed to have our dreams, even if they make us look a little crazy.”

“I am really interested in magical realism," McIntyre told Constellation Mag, "and this sort of realization we all experience about what it means to be an adult.”

So while Unicorn Store isn't based on a true story, it is based in something very real, especially for Larson.

Both McIntyre and Larson say there are inevitably some viewers who won't quite get their point of view, though, and that's OK.

"It’s for the dreamers," McIntyre told Bust. "At one of the unofficial screenings somebody wrote on a comment card, “Maybe if you liked Harry Potter you would like this, but I don’t.' Brie and I were like, 'Who doesn’t like Harry Potter?!' but I guess our movie is not for people who hate Harry Potter. Sometimes I feel like adults who like magical things makes some people mad. Like that person probably won’t like our movie."

“I know that the film isn’t for every person,” Larson told IndieWire. “But I hope that for the people that I did make it for, it resonates with them as a way of saying, ‘We need these voices that are unique and different.'”

If you are the kind of person who loves Unicorn Store and Larson's way of viewing the world, you'll be thrilled to know that Netflix will also host Lady Business, her next project that Deadline reports she'll star in and likely direct.