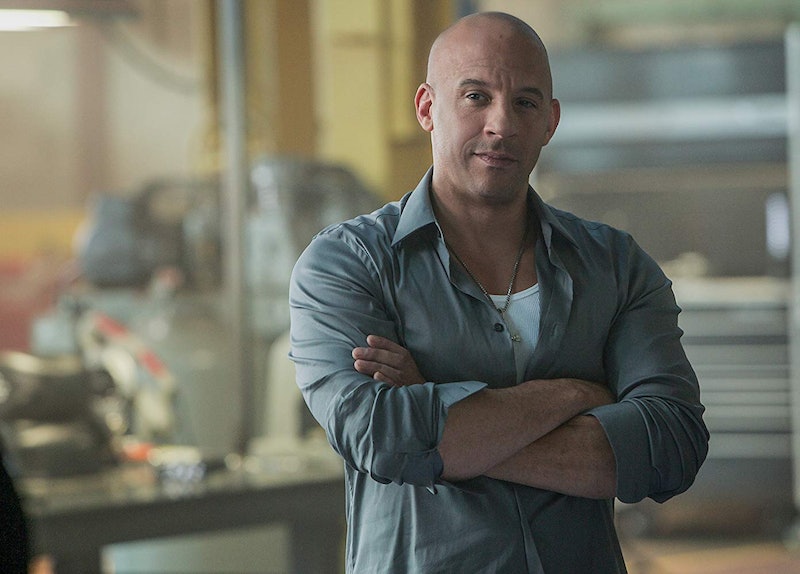 For the ninth installment in the Fast & Furious film series, the franchise has expanded with its first spinoff, starring Dwayne "The Rock" Johnson as former federal agent Luke Hobbs (Johnson) and Jason Statham as rogue former MI6 agent and villain-turned-hero Deckard Shaw. Though fans have been introduced to these characters before, Hobbs & Shaw, which premieres on Aug. 2, takes them on a separate adventure, away from all the other major characters of the franchise. So fans shouldn't expect Vin Diesel to make an appearance in Hobbs & Shaw as Dominic Toretto.

In 2017's The Fate of the Furious, Hobbs winds up in federal custody after running a job with Toretto and his crew, and meets Shaw once again. The two still despise each other, but are forced to work together as recruits on a mission to help the Furious family save Dom from the clutches of high-tech terrorist Cipher (Charlize Theron). Now, in Hobbs & Shaw the pair come together again after being recruited by the government to combat a greater evil: a cyber-genetically advanced villain named Brixton Lore (Idris Elba) who poses a threat to all of humanity.

Dom and the rest of the Furious fam are nowhere to be seen in any of the trailers. And though the possibility of Dom making a surprise cameo isn't totally off the table, it seems unlikely given Vin Diesel and The Rock's ongoing beef.

Per Vanity Fair, it all apparently began when Johnson took to Instagram in a since deleted post and called out a "chicken sh*t" and "candy *ss" co-star in The Fate of the Furious. Fans speculated that it was Diesel he was indirectly addressing, and their co-star Michelle Rodriguez, who plays Dom's love interest Letty, confirmed the feud to People, saying, "Any human being who knows what men are like knows to stay out [of those] situations and let them figure it out."

And in a 2018 interview with Rolling Stone, Johnson claimed that he and Diesel didn't get along well mainly due to differences in their professional attitude. They haven't shot any scenes together since the feud broke out. In fact, their single scene in Fate was digitally altered to make them look like they were in the same room. But it seems that they're on civil terms, at least. “Vin and I had a few discussions, including an important face-to-face in my trailer,” Johnson told Rolling Stone. “And what I came to realize is that we have a fundamental difference in philosophies on how we approach moviemaking and collaborating. It took me some time, but I’m grateful for that clarity. Whether we work together again or not.”

Still, Fast & Furious producer Hiram Garcia remains optimistic that the crew will be reunited again. Speaking with Variety at the Hobbs & Shaw premiere, Garcia confirmed that there are no plans to end the main franchise storyline. "This isn't about a separate world, this is a world that feeds into the Fast & Furious. We just did it out of order," Garcia said. "Whereas the Avengers and Marvel universe, they started with their spinoffs and they got to Avengers, we started with our Avengers in Fast & Furious and now we're starting to spin it off. But it's to help support the Fast & Furious universe because obviously we have plans for 9 and 10, but who doesn't want an 11, 12, and 13, so forth?"

So, there's hope yet for two of Hollywood's biggest action stars, The Rock and Vin Diesel, to share the screen once more. It seems highly unlikely that Diesel was in any way involved in Hobbs & Shaw, but fans can hope for a post-credits scene that teases their reunion in Furious 9.