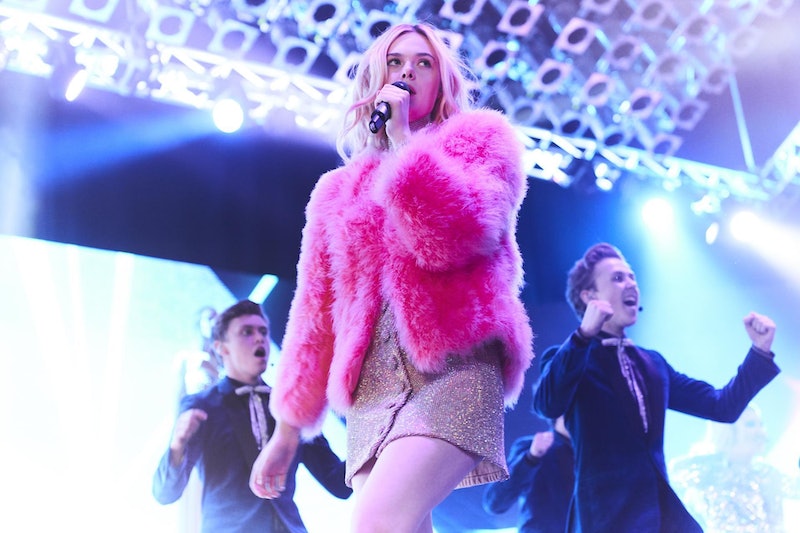 The jukebox movie Teen Spirit's title is more than just a Nirvana reference — it's also the name of the American Idol-style reality show that holds the key to a shy teen's dreams of pop stardom. Elle Fanning plays Violet Valenski, a first-generation Polish teen living in a drab English town. Spending days avoiding school bullies and working a dull job, some nights she sneaks off to warble at a local bar. It's there she meets an unlikely mentor who pushes her to join the competition, where Violet's put to the test (while singing a full slate of songs by Grimes, Major Laser, Tegan & Sara, and Robyn, among many others). So is Violet in Teen Spirit based on anyone in particular? Not so much. She's more of a singular vessel through which the spirit of modern pop flows.

Speaking to YSBNow, Fanning says she watched videos of Katy Perry, Rihanna, and Taylor Swift performing to prepare herself to play Violet, analyzing the flamboyant performers carefully. "They're pop stars for a reason, and there's a technicality to it as well," Fanning noted.

In that same interview the film's writer/director Max Minghella said he was careful to avoid modeling Violet on any specific person. "It's very important to me that we didn't... point to someone in particular and say 'This is who she is like.'" That said, he goes on to namecheck singer Dua Lipa, whose parents left Kosovo's capital in 1992 before settling in England, where Lipa was born. Lipa started her career posting YouTube videos of herself covering her favorite pop tunes, though unlike Violet she didn't have to enter a singing contest to land her record deal with Warner Music. She also already had one foot in the industry — her dad's a band manager and member of Kosovar rock band Oda — while Violet's broken home doesn't really encourage her musical hopes.

"Violet's a very unique artist and has a very unique attitude," Minghella's careful to reiterate, with no particular real-life inspiration exactly matching up to the character. And there are plenty of inspirations when it comes to Violet, and the film as a whole.

Speaking to Rama's Screen Minghella said of Teen Spirit, "It's my first movie, you never know if you're gonna get to make another one, so it's really a selfish project. It's just all of the things I love packed into 90 minutes. That's the inspiration behind it, very self-serving." Talking to Hollywood XYZ he got a little more specific. "I heard this Robyn song 'Dancing On My Own' right when it came out; I fell in love with the song... I loved how cinematic it was, this big pop anthem, but it was also quite melancholic and sad, and I thought it was a very interesting contrast. So I kind of started from there and writing to that piece of music, and it turned into this movie."

By avoiding tying Violet to anything in reality but the emotion we feel when our favorite song comes on the radio, it's a lot easier for Teen Spirit's Cinderella-goes-pop-singer story to work as the modern fairy tale it's meant to be.