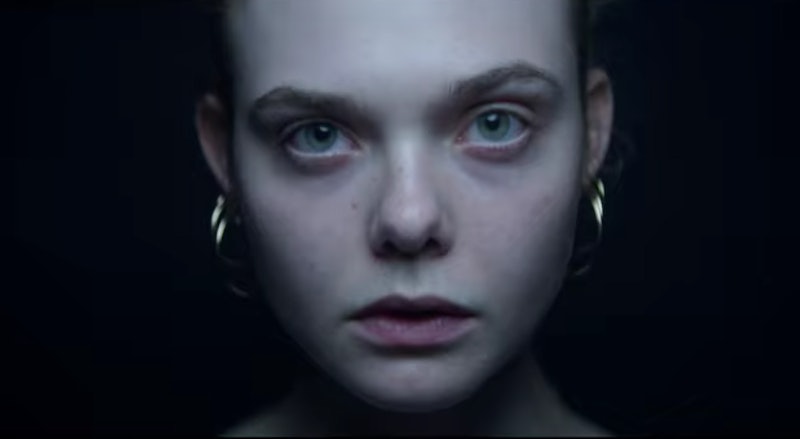 Your new favorite pop star might just be Elle Fanning, or, at least, her newest character. In the new Teen Spirit trailer, Fanning sings a cover of Robyn's "Dancing On My Own," and shows she's a teen idol in the making. But, while she sounds great, from the looks of the rest of the trailer, pop stardom might not be all it's cracked up to be.

The first trailer for Teen Spirit, written and directed by The Handmaid's Tale's Max Minghella, gives an introduction to Fanning's Violet, a shy British teenager who dreams of pop stardom. It's why she decides to compete in an American Idol-style singing competition, where she wins everyone over with her dreamy rendition of "Dancing On My Own."

The montages, alone, of her in Fame-esque dance rehearsals and performing onstage, make it clear that to be the best, Violet's gonna have to work overtime to beat the rest of these other prospective pop stars. And to do so, she's also gonna need a good set list. Along with Robyn, the trailer teases that Fanning will perform songs from Ellie Goulding, Tegan & Sara, Annie Lennox, Orbital, and Sigrid throughout the film. Not to mention, a brand new song from Carly Rae Jepsen and Jack Antonoff called "Wildflowers," according to Pitchfork. Music from Katy Perry, Grimes, and Ariana Grande will also be featured in the film.

So yes, the soundtrack for Teen Spirit, which hits theaters April 5, 2019, is going to be pretty killer.

Throughout the trailer, Fanning is getting the full on A Star Is Born treatment as she goes from country girl to big time star. Someone tells her to "sing from the heart," while Rebecca Hall's character tells the young girl, “Life comes down to these moments, Violet, don’t take them for granted.” It's a short clip that gives audiences a look at all the pressure and backstage anxiety of being a pop star in the making. The pressure is certainly on her to succeed, but Violet seems up to the challenge. "I never dreamed I'd make it this far," she says.

Teen Spirit is described as a coming-of-age Cinderella story about a girl who finally gets up the courage to pursue her dream. In an interview with Bustle from earlier this year, Minghella said he wanted his upcoming directorial debut, Teen Spirit to focus on a young woman coming into her own.

"I’ve always been drawn to female stories," he said, admitting he preferred to watch or read something with a woman at the center of it. "On a whole, I find female characters to be more complex," he added. "If I was setting out to tell a story it seems like a better place to start."

The story of a female pop star seems to be of interest of a lot of male directors as of late. What with the release of Bradley Cooper's A Star Is Born and Brady Corbet's Vox Lux starring Natalie Portman, who also did her own singing in the movie, which features an original soundtrack from Sia.

Editor's note: This article has been updated to clarify which artists' songs will be covered by Fanning in the film.