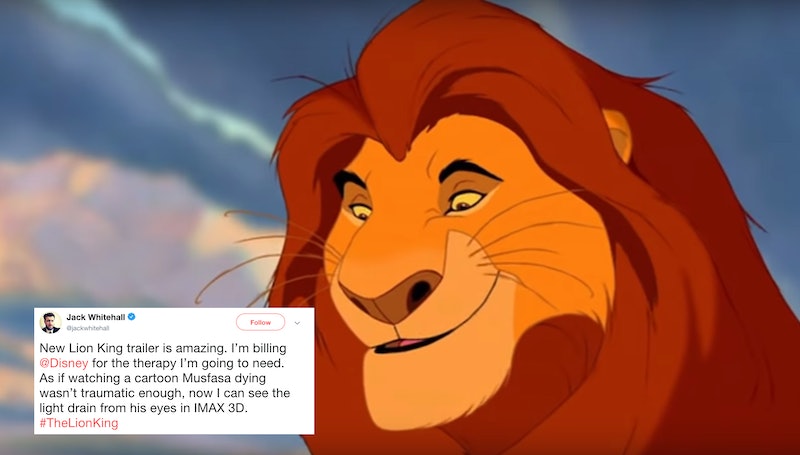 Disney shaped my childhood. I have a feeling that you agree with that sentiment too, especially if you were lucky enough to be raised during the Disney golden era as I was. From The Lion King to Hercules, Tarzan to Lilo and Stitch, these films truly taught me a lot about myself and life in general, including the inevitability of death. A bit morbid I know but according to a 2017 study, watching Disney films can be beneficial for children when it comes to understanding death and bereavement.

Published in OMEGA — Journal of Death and Dying, Professor Kelly Tenzek and Professor Bonnie Nickels analysed 57 Disney and Pixar films and came to the conclusion that while "characters are over twice as likely to die in films for young viewers than in those aimed at adults," these scenes can open up a conversation for children to have with adults regarding bereavement and death.

For example, I used to watch The Lion King religiously as a toddler and onwards (to the point where I nearly wore the VHS tape out), and I would sob at Mufasa's death every single time. But, my parents would always be on hand to comfort me, answer questions and tell me how it's all part of the circle of life. Disney's teaching life lessons, y'all.

And that's why it's so important to witness moments like these at such an early age, even if they're being depicted through animated animals. "These films can be used as conversation starters for difficult and what are oftentimes taboo topics like death and dying," Tenzek explained. "These are important conversations to have with children, but waiting until the end of life is way too later and can lead to poor end-of-life experience."

Obviously this study isn't suggesting that parents explain flat out to their toddlers that everyone will die at some point, but does demonstrate that letting kids experience these films can encourage them to formulate their own questions regarding death that their parents can then accommodate.

"We believe Disney and Pixar films are popular and accessible for children and adults so a difficult conversation can begin in a less threatening way earlier in life. We acknowledge a child's psychological development is important when considering these discussions. It's not our intent to have these conversations with a three-year-old, but as children mature, then the films fit naturally into that growth."

Sure some scenes may be more than distressing — I'll never forget my heart dropping at Hercules wasting away and nearly succumbing to the underworld — but I can honestly say that I wouldn't be the same person that I am today without having been exposed to these films as a child.

There's something magical in the way that Disney presents these moments in their films. They treat their younger viewers with respect, knowing that even if they don't fully grasp the concept of life, death, or love, they at least understand the basics. That's why these scenes stick with you as you grow older — it's that good ol' Disney magic at play.