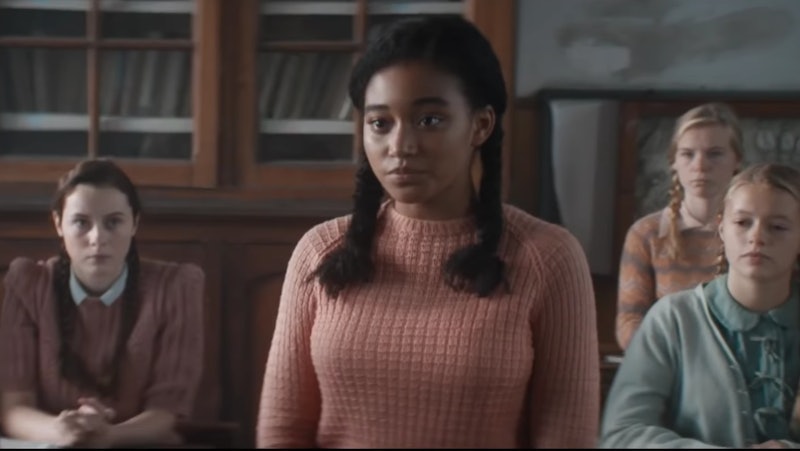 Some of the most well-known Holocaust-set movies tell true stories of brave or tragic figures who lived through the genocide, like Schindler's List, The Pianist, and The Zookeeper's Wife. Yet the new Holocaust-set film Where Hands Touch isn't based on a true story, though it does use historical facts to share realistic tales. Where Hands Touch stars Amandla Stenberg as a 16-year-old named Leyna, who lives in Germany in 1944. Unlike most movies set during that era, Where Hands Touch doesn't focus on the plight of the Jews during the Nazis' fascist leadership, because Stenberg plays what the Nazis called a "Rhineland bastard" — the child of a German mother and African father.

As you probably know, Jews weren't the only ethnic minority targeted by Hitler's attempts to ethnically "cleanse" Germany to become an Aryan nation. As The New York Times reports, while not many people of other races lived in Germany at the time, most Black Germans of the era lived in the Rhineland region in Western Germany, as most were French soldiers of African descent who landed in Germany post-WWI.

In the film, Leyna and her white mother (Abbie Cornish) live in Rhineland before they move to Berlin to flee the Gestapo. In Berlin, Leyna meets a boy named Lutz (George MacKay) who happens to be a member of the Nazi Youth. Against all odds, Leyna and Lutz fall in love, and while their romantic tale is fictionalized, the context of Nazi Germany is totally based on reality.

Where Hands Touch, which comes to theaters on Sept. 14, was both written and directed by Amma Asante, who notably directed the film Belle. In an interview with IndieWire, Asante spoke about how she informed the historical setting of the film, saying, "I interviewed people who have experiences, and those experiences weren’t necessarily comfortable ones, but it’s their truth, and it’s not our right to challenge that.”

Additionally, the writer/director wrote a post on her website explaining the depths of her research that she executed. "We were able to access articles from the period, newspaper caricature sketches, small and large details that we could photocopy and place in our research files, slowly fleshing out a picture of a world," Asante wrote.

Where Hands Touch received backlash on social media in February when the trailer first came out, with people accusing the film of “romanticizing” Nazis. And in September, after seeing the film at the 2018 Toronto International Film Festival, some critics like The Muse's Cate Young expressed that it portrayed Lutz too generously. Yet Asante has defended her choice to tell the story of a person of mixed-race during the Holocaust in this way. While talking to IndieWire, Asante said, "When people talk about it as a romance, and romanticizing Nazism, that is the one thing this movie does not do. I hope that people walk away being really, really clear about the story that I have tried to tell. I hope that people walk away moved."

While you can't go in to see Where Hands Touch expecting a story about a real-life hero like Oskar Schindler or a specific survivor like Władysław Szpilman, Asante's ambitious research allowed her to tell a fictional story set to an — unfortunately — true setting.