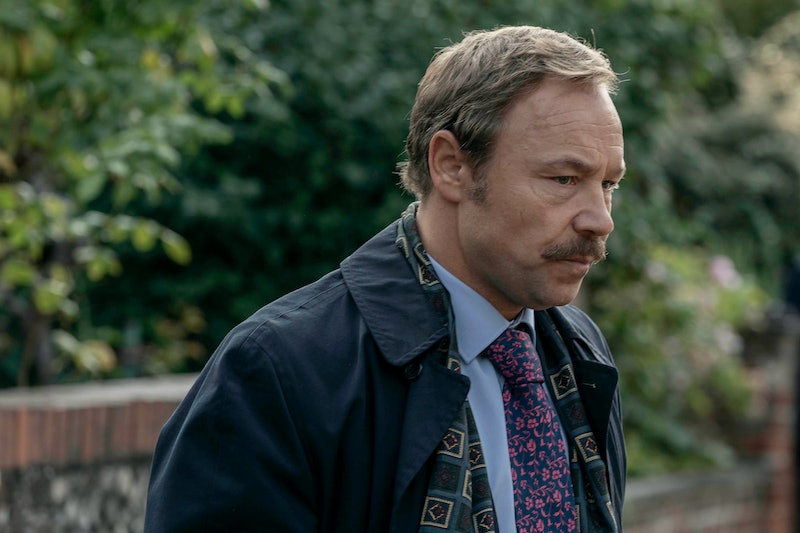 ITV's latest drama White House Farm tells the story of a harrowing murder case, in which five members of the same family were tragically killed. In addition to the show's true crime premise, the six-part series has an impressive cast, which features of Line of Duty star Stephen Graham, Game of Thrones' Mark Addy, and many others. But is White House Farm based on a true story? Here's everything you need to know about ITV's newest crime drama.

According to the Radio Times, the new series is indeed based on a true story, and centres around the 1985 White House Farm murders. As The Sun reports, the killings took place when June and Nevill Bamber, their two grandchildren Daniel and Nicholas, and adopted daughter Shelia, were all shot to death on the family's farmhouse in Tolleshunt D'Arcy, Essex. Police initially believed that Sheila — who suffered from schizophrenia — had carried out the murders, before turning the gun on herself. However, after revealing to his girlfriend that he was in fact responsible for the killings, June and Nevill's surviving son, Jeremy Bamber, was later found guilty of the heinous crimes. In October 1986, Jeremy was jailed for life without the possibility of parole, although his earlier confession was not the sole reason for his eventual conviction.

According to The Sun, detectives soon realised that the weapon used to carry out the murders was too long for Sheila to have turned on herself, and Jeremy's previous claim that his deceased father had phoned him for help also turned out to be false, as no blood was found on the family's telephone. As reported by the Radio Times, a jury verdict concluded that Jeremy Bamber had staged the murder scene to purposely frame his sister Sheila, and in turn gain access to a large inheritance. Despite being handed a life sentence, Jeremy still maintains his innocence, and has made various attempts to have his case reviewed.

ITV's White House Farm is set to retell this shocking true-crime story, and will see Graham, along with Year of the Rabbit star Freddie Fox, and Gentleman Jack's Gemma Whelan portray some of the real-life figures who were at the centre of this tragic murder case. Although a dramatisation, the series was created with cooperation from surviving family member Colin Caffell, whose wife and twin sons were sadly killed during the 1985 murders.

So, viewers can perhaps look forward to a pretty authentic take on one of Britain's most shocking crimes, and you can watch White House Farm on Wednesday, January 8, at 9 p.m. on ITV1.