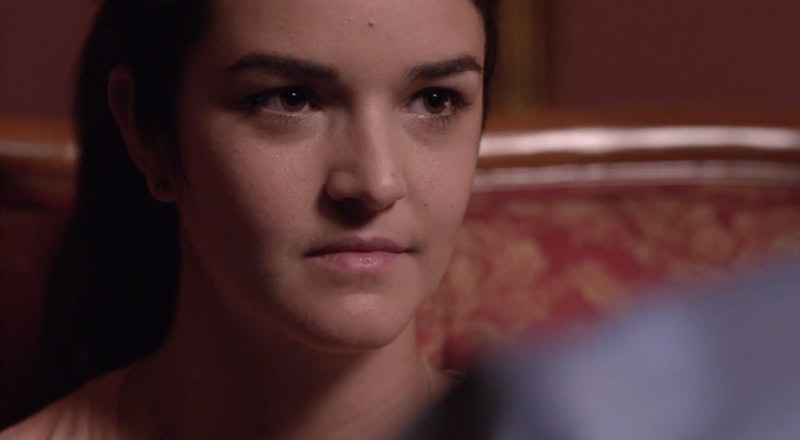 There's no better way to spend a Saturday night on the couch than snuggling up with snacks and a Lifetime movie. And no one does a juicy stalker flick quite like the popular network. For example, Who's Stalking Me? is not based on a true story, but it has a plot that could actually happen in real life — which makes it all the more terrifying.

According to Lifetime's official website, Chelsea Ricketts stars as Amanda, who's traumatized after nearly being killed during a recent home invasion. She's not sure if she's safe anymore, but Detective James Dawson insists he will offer her protection during this difficult time. As expected, he's a handsome and generous guy who puts Amanda at ease, but it's only a matter of time before she realizes he's dangerous. Yep, this sounds like the perfect movie to entertain Lifetime fanatics.

The Who's Stalking Me? trailer paints a sinister picture from the get-go as Amanda encounters and barely escapes her attacker. She's visibly shaken, but Detective Dawson stoically assures her that she is safe. Amanda soon discovers a very obvious camera in her home and surmises that the detective is watching her every move when he's not around, which proves to be correct as he tunes in from his laptop.

Dawson is visibly angry about her discovery and quickly drops his "concerned cop" act to reveal his true personality. His voice-over insists that "all I wanted to do was take care of you" as he suddenly appears at the top of a stairwell. Yikes.

Amanda attacks the detective with mace as she admits that her biggest regret is trusting him. At the end of the trailer, Amanda trains to exact her revenge by practicing at a shooting range with a crew by her side. It's not clear how much time has passed, but she's apparently become skilled enough to pop off consistent head shots. The only way to take out a stalker in the Lifetime universe is by killing him, so it’s not looking good for the detective.

The trailer and plot pretty much answer the title's question about the stalker's identity. Clearly, it's Detective Dawson and he's probably the guy who broke into her house in the first place. It's going to be a sticky situation for Amanda as she tries to prove this supposed police officer orchestrated an entire burglary. Why would he want to hurt Amanda? And are any of his co-workers in on this scheme? There's a ton of ways this story can go.

There's also the possibility that the detective is working with someone else to wreak havoc in Amanda's life. Perhaps there is someone from her past who is connected with Dawson and they are looking to get revenge on her for some unknown reason. Honestly, anything goes in a Lifetime movie, even if it seems super far-fetched.

Will Amanda make it out of this stalking situation alive? The only way to find out is by tuning in on Feb. 23 at 8 p.m. ET.