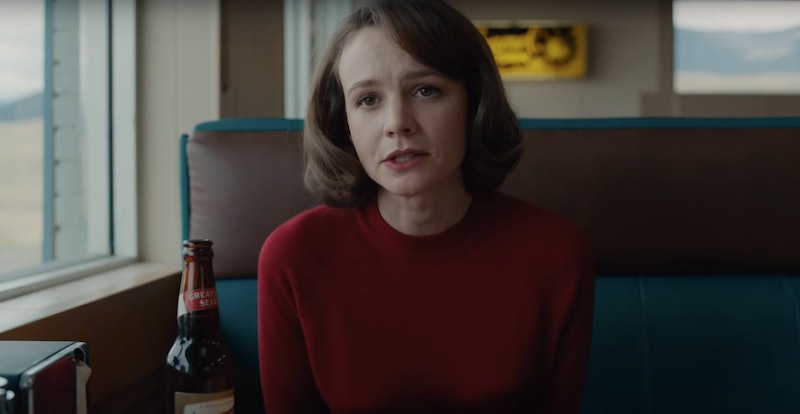 If you're a fan of a dramatic period piece, then Wildlife should be on your radar. The film — which was written by Paul Dano and Zoe Kazan and is also Dano's feature directing debut — follows a family living in Montana in 1960 and the issues they encounter during one week in their lives. Since the plot is fairly simple (more on that below), is Wildlife based on a true story or a real family? The plot seems plausible, but this one is fiction.

Wildlife is based on the novel of the same name by author Richard Ford. The book was published in 1990 and received mixed reviews, and the writer is more well known for his books about the character Frank Bascombe, including The Sportswriter and Independence Day, for which he won the Pulitzer Prize for Fiction in 1996.

In Wildlife, the book and the film, a husband and wife named Jerry and Jeanette move to Montana with their teenage son, Joe, where Jerry starts work at a golf course. Soon, though, he loses his job and decides to go help with fighting wildfires. During this same time, Jeanette meets another man, and Joe witnesses his mother cheating on his father.

Wildlife takes place over only a week, which is something Carey Mulligan, who plays Jeanette, spoke to Vulture about during an interview. "Someone who is seen to be doing the wrong thing, as a women onscreen, she’s defined by her wrongness. Someone had said to me [in a Q&A], 'She’s a terrible mother, no?' I was like, 'She’s not a terrible mother, no! This was like a seven-day period, f*cking hell, give her a break.' It’s not ideal and definitely she behaves in a not-good way, but you can’t be defined by that."

Dano first came across the book because he was already a fan of Ford's and was looking for more. He told Deadline during the Sundance Film Festival in January, "I'd just read a book [by Ford] called Rock Springs, which is a short story collection that's written in a type of language that I just love and really respond to, which is something that seems simple but is really complex, spare, honest. "And I was — Oh my god, does he have another book like this? And I found this book called Wildlife." He explained that he loved the book from the very start and thought it had potential to be a film.

Thankfully, Ford was on board. After Dano wrote to him, he says Ford responded, "Go make your film. It's your film. Don't worry about my book. You do you." Dano then teamed up with his partner, Kazan, on the script and eventually the movie version of Wildlife came to be.

Wildlife, which got a limited release on Oct. 19, has been highly praised since its Sundance debut, in particular for Mulligan's role and Dano's directing. While it's only in select cities and theaters now, if the buzz keeps on building as we enter awards season, you might be able to catch this not true, but very real film in a theater near you soon.

More like this
The 'Lady Chatterley's Lover' Book Leaves Us With A Troubling Question
By Catharina Cheung
Meghan Markle Wishes Learning Royal Protocol Was Like 'The Princess Diaries'
By Jake Viswanath
Taylor Swift Is Writing & Directing Her First Movie
By Jake Viswanath
Yes, That's Lindsay Lohan's Sister Singing In The 'Falling For Christmas' Movie
By Radhika Menon
Get Even More From Bustle — Sign Up For The Newsletter