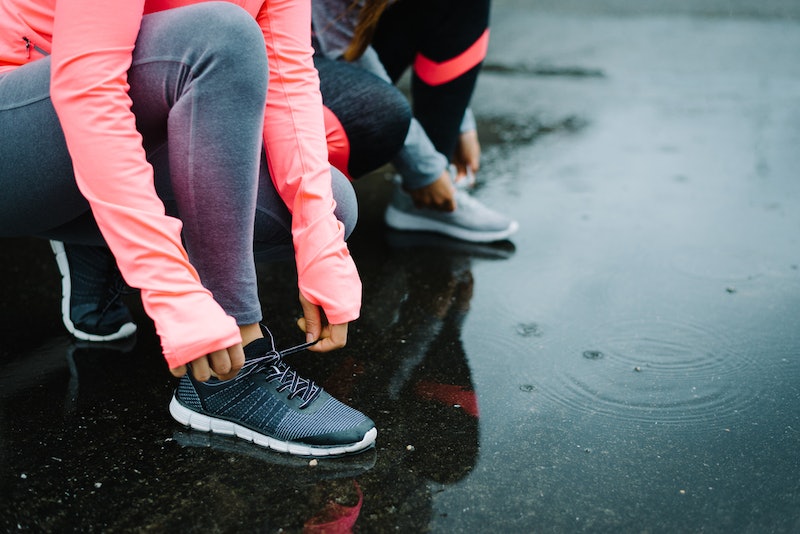 For people who love to exercise in the great outdoors, the onset of winter provides a chilly conundrum: Is working out in cold weather bad for you, good for you, or somewhere in the middle? Maybe you’ve just gotten into a regular running routine, and are now faced with extreme temps that make you question how you’re going to get your exercise in. Or perhaps you just prefer being in nature as a more scenic (and cost-free) alternative to working out in a traditional gym. Whether you’ve just started working out or are a regular running pro, here’s everything you need to know about working out in the cold.

First off, there’s a widely held belief that exercising in the cold burns more calories than working out indoors. The reality is, science isn’t majorly conclusive on this yet, but burning calories isn't necessarily a good measure of a workout's effectiveness, anyway. Fitness experts have previously told Bustle that looking at other metrics in a workout is key to developing a sustainable relationship with exercise — one that's based around feeling good. "For me, I find that if I focus my efforts on performance-based metrics as opposed to calorie counting, I tend to be in a healthier mental state as well as see more progress in achieving my goals," Caley Crawford, the director of education at Row House, told Bustle in 2018.

Now, onto the facts. If you intend to run outside when it’s cold, what you wear is (obviously) important. In an interview with Gizmodo, Dr. Jack Daniels, a famous running coach, suggests fabrics that don’t absorb water. Daniels recommended wool in particular, due to the fact that it will keep a runner warm even when it is damp.

Wearing layers is also key, giving you the flexibility to remove pieces as you warm up. Daniels suggested “relatively tight, long-legged/sleeved undergarments,” with the additional of wool layers, socks, hat and windproof gloves.

Depending on how cold the climate you're exercising in is, another thing to be mindful of when training outdoors in cold weather is your lung health. Michael Kennedy, an associate professor of kinesiology, sport, and recreation at the University of Alberta in Canada, told Quartzy that cold-weather exercisers should watch for coughing, mucus buildup in the throat, or any sort of trouble breathing while they work out — these could potentially be indicators of "cold-induced lung trauma."

Exercising in frigid temperatures below 40 degrees without wearing proper protection may have long-term effects on lung health and function, Kennedy noted. “Cover your mouth with a buff or some sort of quick-dry neck covering,” Kennedy said, in addition to waiting to go back indoors until slowing down your breathing to normal in order to prevent lung stress.

All in all, scientific evidence is still inconclusive on the benefits of training outside versus indoors, aka one is not definitively better than the other. But if you’re keen on running outside anyways, dress appropriately, and be mindful of your body temperature and how you’re feeling throughout the workout.