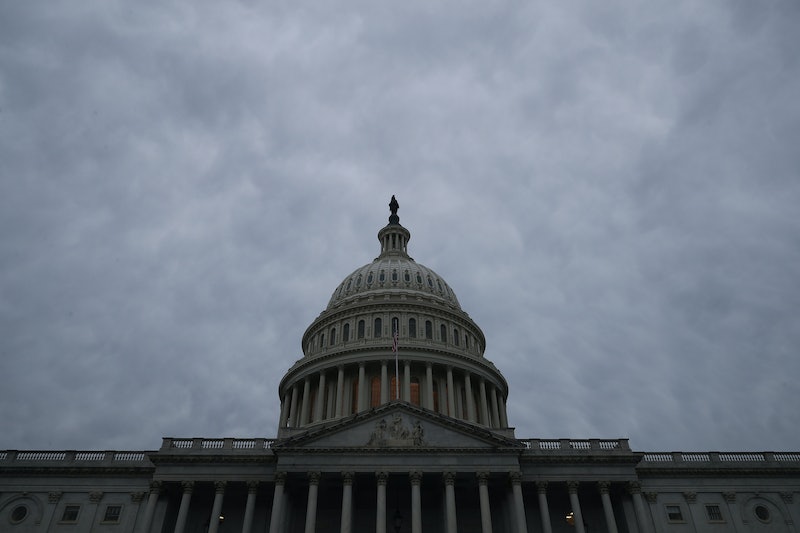 Roughly 380,000 federal workers have been furloughed and another 420,000 workers have been working without pay during the government shutdown, which began on Dec. 22. According to CBS News, federal workers are barred from going on strike, so a lawsuit is a more viable course of action. The Hill reported that four of the plaintiffs on the lawsuit have had to work without pay during the shutdown, while one was deemed nonessential and subsequently furloughed.

The lawsuit, filed on Wednesday, asserted that obligating federal employees to work without pay during the shutdown violates the 13th Amendment, which abolished slavery and involuntary servitude. The federal workers who filed the suit have also argued that the government has violated their Fifth Amendment rights by supposedly limiting ways they can seek alternative employment. Bustle has reached out to the White House for comment.

Working without pay during a government shutdown does not constitute slavery or involuntary servitude, because federal employees are still able to quit their jobs — as some TSA agents have done, for example. But the lawsuit uses the language of the 13th Amendment to argue that working without pay is illegal.

Since the shutdown began, the National Treasury Employees Union and the American Federation of Government Employees Union have filed similar lawsuits against the government, arguing that forcing federal employees to work without pay during a shutdown violates the Fair Labor Standards Act.

According to Vox, the Constitution does not protect the salaries of congressional staff members or other federal employees during a government shutdown, even as it preserves those of members of Congress. Article 1, Section 6 of the Constitution states that "Senators and Representatives shall receive a Compensation for their Services, to be ascertained by Law, and paid out of the Treasury of the United States" — meaning that they are guaranteed a salary no matter what.

The 27th Amendment also bars members of Congress from changing their salaries between elections, so they do not shift during a government shutdown. To protest the fact that they are being paid while other federal workers are not, at least 71 Congressional officials have said that they will either reject or donate their salaries, per CNN.

Federal workers have expressed concern over Trump's threat to keep the government shutdown going for "months or even years" — as long as it takes to get the funding he has demanded for his proposed border wall. It has been nearly three weeks since the shutdown began, but Trump has indicated that he will not sign off on any plans to fund the government that do not also include funding for the wall.