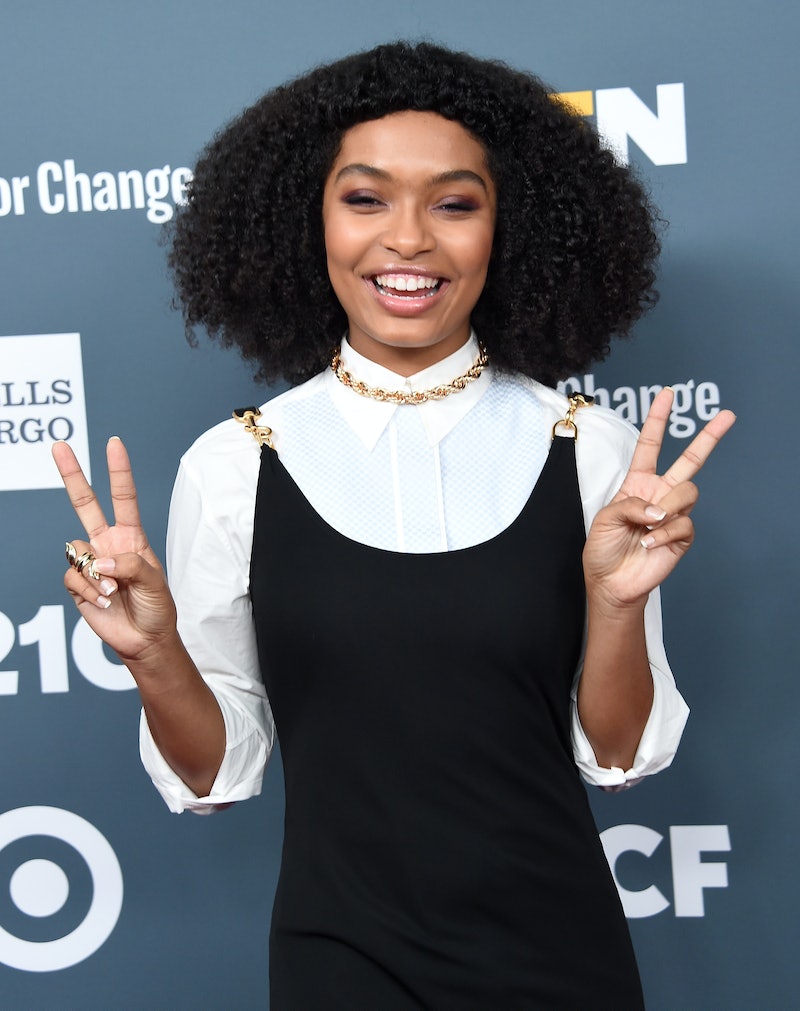 Last year, the Yara Shahidi made waves on the red carpet when she showed up to the Screen Actors Guild Awards in a stunning Ralph Lauren jumpsuit adorned with an enormous bow-turned-train. But this year, she's also making waves behind the scenes as a SAG Awards ambassador, giving her fans an inside look at everything that happens in the days leading up to the big event. She's certainly been in-demand given her talent for acting and activism, which makes us wonder if Yara Shahidi is single — though we're guessing she's probably too busy being an accomplished actress, political activist, and student at Harvard (yes, Harvard) to be dating anyone at the moment.

Shahidi announced her acceptance to the Ivy League school in June 2017, before following her Black-ish and Grown-ish character, Zoey, into her college years. The spinoff just debuted its second season on Jan. 2 and Zoey is in her sophomore year.

"It's really useful," she said on Good Morning America, regarding experiencing college life on-screen. "When I tell you, I give great college advice to my friends because I'm like, ‘Oh, we just did this last episode.’ And it's so nice because [Zoey] gets into so much trouble that I have advice for like every situation possible."

And that includes dating. Shahidi has seen Zoey encounter some heartbreaking situations in her dating life, and for that and many other reasons, she says she's decided not to focus her energy there just yet. After all, she's only 18.

“I haven’t dated anybody. My general outlook is if I don’t have time to take a bath on a regular basis, then I don’t have time for another human," she told Seventeen in Oct. 2017. "I love being busy, and I enjoy where I am at right now.”

By the looks of her social media, she's still very busy in 2019. And she doesn't seem to be sharing selfies with anyone who's more than a friend. At this rate of booking, she's going to be this busy for a while. So she might be happily single for the foreseeable future.

During mid-term election season, she founded the Eighteen x 18 initiative, per ABC News, an organization that empowers and encourages her generation to vote, and she remains very engaged with her activism. She actually has said she plans to boost her engagement even more this year, so who knows what she has up her sleeve. Just don't expect her to only be active around election day.

"I feel like the goal is continue to express how civic engagement is an everyday activity and as much as voting is important, how we can express power within our communities and help our communities as well," she said on Good Morning America.

On top of that, she's also double majoring at Harvard. "As much as I want free time, I love to challenge myself," she told Seventeen. "And so it really goes back to the point that I want to study as much as possible and [doing] a double major is the solution."

Case in point, Shahidi is too busy saving the world to be dating anyone — at least as far as we know. But she won't be too busy to attend pre-SAG Awards events and share all of the hype with viewers on social media. According to E! News, she and her fellow ambassador, Harry Shum Jr., will also have the opportunity to recognize some outstanding film and television stunt ensembles for their incredible work over the last year. Follow Shahidi on Instagram and Twitter to stay up to date.