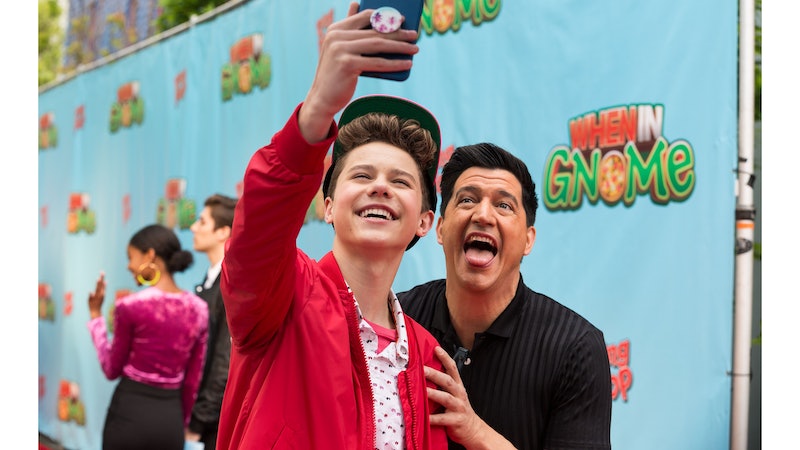 As The Other Two continues to probe what it means to be a barely-teen celebrity, the show is expanding its cast of characters and fleshing out its world. New addition Yendani, like Chase, is not based on a real person, but her character does help to parody a long-rumored staple of the entertainment industry: fake relationships.

Part of Chase's transformation into full-fledged influencer and musically-inclined teen heartthrob ChaseDreams involves appealing to his young, Gen Z fans, and according to his manager Streeter, that includes expanding his reach by getting a (contracted) girlfriend. For Chase, that's social media influencer Yendani. Streeter explains that their label has set up the relationship as a business deal, as they're both releasing albums soon and could use the mutually beneficial promotion.

Soon, ChaseDreams and Yendani take to Instagram Live to announce their relationship to their devoted audiences — all while Chase's siblings, Cary and Brooke, are forced to confront the fact that the only love in their life seems to be, at best, conditional and, at worst, non-existent. However, Chase's situation isn't all that far from Cary and Brooke's: not only is Chase's first-ever relationship unfolding within the public eye, but that relationship is entirely fraudulent.

Chase, who is portrayed as a sincere but understandably naive kid, goes along with the situation — largely because the adults in his life (his manager and his mom) both encourage him to. Ultimately, his faux romance with Yendani is short-lived: she gets an offer to start dating Millie Bobby Brown instead, and she and Chase film a video announcing their breakup. Such is the whirlwind of young love — at least as far as their followers know. Still, this manufactured, business-first perception of relationships could have a profound effect on how Chase grows to view love later in life.

"If you think about it, [Chase] absolutely is not having fun. Every episode has been terrible [for Chase] but no one's thought about him. No one thought about what he's thinking," co-creator (and former Saturday Night Live writer) Chris Kelly told Bustle in a recent interview. "You're going to see throughout the course of the season that he's just a sweet kid that is moved about by people and by the entertainment industry and you feel bad for him."

Here, the show accomplishes that by playing into the relationships-as-publicity-stunt narrative that's long trailed celebrity couples. Perhaps the most well-known example is the relationship between Justin Timberlake and Britney Spears. Per Marie Claire, a source claimed to Star magazine in 2007 that the two "were together for the hype" and that even their breakup was scheduled. It's purely a rumor, but one that has persisted throughout the years — and Justin and Britney aren't alone. More recently, BlindGossip claimed that Selena Gomez and The Weekend's relationship was solely a PR stunt, while Lil Xan himself claimed his relationship with Noah Cyrus was a publicity stunt put together by their mutual record label, Columbia Records, which a label rep denied to Teen Vogue. Again, it's all strictly speculative, but it's a common enough trope that when Streeter suggests it to Chase, it seems par for the course.

The difference is that we, as a public, aren't usually confronted with the other side of it: the sad realities of how young people experience stardom, and the effects this kind of thing (and all the gossip that comes with it) could have on them. Chase seems like he's along for the ride for now, but from the sounds of it, this is only the start of what could be a very trying, confusing time for him.