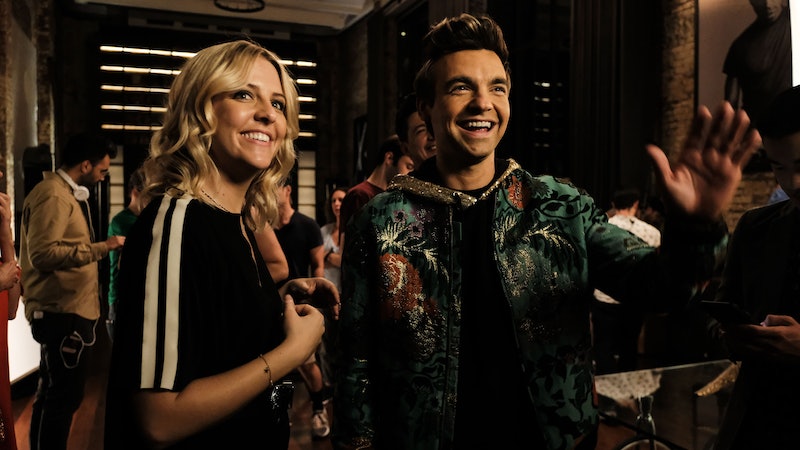 In Comedy Central's The Other Two, two siblings watch from the sidelines as their 13-year-old brother, Chase, skyrockets to fame. It's a familiar premise — particularly amid an age so flooded with viral, overnight stars — but The Other Two isn't based on a true story. There are certainly real elements to it (creators Chris Kelly and Sarah Schneider have said as much themselves), just set against a pretty funny, outrageous backdrop.

"[The show] allowed us to tell very simple, grounded, human stories but with a sort of dumb umbrella of more ridiculous characters and ridiculous music videos," Schneider, who was a writer on Saturday Night Live with Kelly, told IndieWire.

Still, Kelly added, it's all coming from a very genuine, authentic place. "We still want the jokes to be rooted in the characters' real anxieties, real worries, real struggles so that inherently, there's drama there," he continued. "I feel like it makes it feel a little more fulfilling, to have the comedy feel like it's coming from a human place as opposed to the characters just being joke machines."

For Schneider and Kelly, part of that meant crafting the characters of Cary (Drew Tarver) and Brooke (Heléne Yorke), Chase's brother and sister, loosely around their own partnership. "That sibling dynamic between Cary and Brooke is kind of similar to ours," Kelly said. And in an interview with Variety, he reiterated that they, "wanted to tell grounded stories with characters that we related to, that felt like versions of us, or had gone through things that we had gone through in our lives," he said.

As for Chase (whose stage name is ChaseDreams)? That inspiration came from a real celeb: Justin Bieber. Well, kind of. Kelly said in the same Variety interview that Chase is not supposed to be Bieber — and Chase's manager Streeter (Ken Marino) isn't supposed to be Bieber's manager, Scooter Braun — but there is one line in the first episode that references them.

As Kelly explained at Vulture Fest in November, there's an "egg joke" that calls back to when Bieber hosted SNL in 2013. He and Schneider were working in the writer's room at the time, and when Braun showed up to a pre-show meeting in Bieber's place, the team asked where the singer was. Apparently, Braun told them that Bieber was throwing up from eating too many raw eggs, which Braun had given him in an effort to make the young pop star more ripped. As Kelly told Variety, "That egg joke made us think about like, 'Oh poor Justin Bieber.' He is one boy that an entire team of people is moving around the world and telling him what to do and when to eat and what to wear, so that got our brains churning. So we put that into the show a little bit."

However, whereas Bieber has gotten himself into a few public debacles over the years, Schneider said they wanted Chase to be less controversial. "I think if anything, our takeaway from Justin is that we didn't want our kid to be unlikeable," she told The Daily Beast. "We didn't want him to be this above the rules, like peeing outside of brothels. We wanted him to be sweet. We thought that was tougher to be faced with for the brother and sister than if their brother was just an asshole."

It's also worth mentioning that Case Walker, who plays Chase, is an internet star himself: he gained prominence on music app TikTok (formerly Musical.ly). But, again, The Other Two isn't based on his —or anyone else's — actual experiences. Instead, the series will follow fictional characters who are going to resonate with anyone familiar with the entertainment industry. And, as Kelly and Schneider proved on SNL, they know a thing or two about spoofing real-life pop culture.