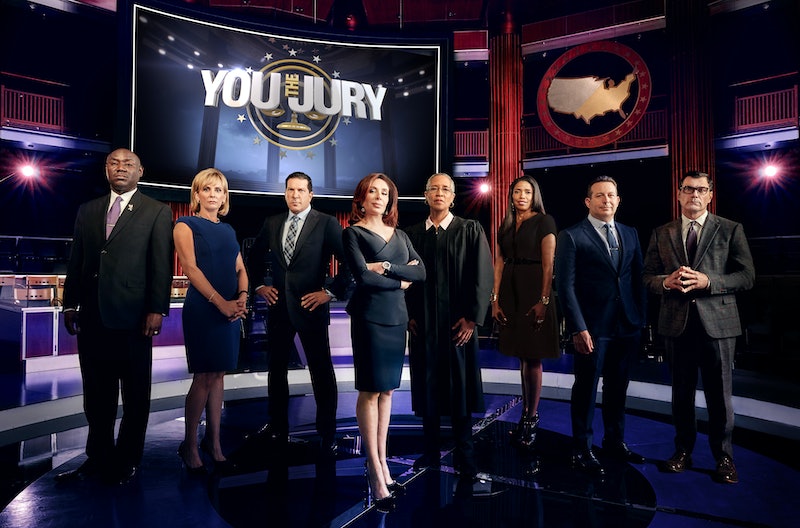 Reality TV viewers make up a jury that delivers a verdict via text or an app. No, this isn't a synopsis for a Black Mirror episode — it's the basis of FOX's new reality show, You The Jury, premiering Friday, April 7. According to FOX, real cases are prosecuted by real lawyers with a real judge. But, the jury, aka the audience, delivers their verdict via text and the FOX Now app. So, is You The Jury legally binding? A rep for the network tells Bustle that the verdicts are binding, and the process will be further explained during the premiere.

According to the show's FOX website, the cases on You The Jury are represented by real attorneys — famous for celebrity clients and high profile cases. And, retired judge of the Superior Court of California LaDoris Cordell presides over the courtroom. After the cases are presented, the audience will decide the outcome by submitting responses via text and the FOX Now app.

"America's Verdict," as FOX calls it, will be revealed at the end of the East Coast/Central time zone broadcast. This verdict is "100% live and binding," according to the FOX website. However, the network explains that if West Coast/Mountain time zone votes (combined with Eastern and Central) lead to a different verdict, "the original verdict will be overturned as the final outcome of the case."

Before you become too concerned about our dystopian legal futures where technology provides a verdict, it's important to note that these cases are likely similar to other courtroom shows. Yes, they are legally binding. But, they aren't what you would encounter in a real court of law. For example, the show won't try criminal cases.

According to a Mental Floss article, courtroom TV shows like Judge Judy "don't take place in real courtrooms and they don't feature real trials, though they are usually real cases." The Mental Floss piece (titled "What Legal Authority Does Judge Judy Have?") explains that what we are really watching on courtroom shows is an arbitration process.

"Arbitration is a legal method for resolving disputes outside the court," the Mental Floss article states. Third party arbitrators, like Judge Judy, hear the case and make a legally binding decision. The article explains that arbitration is often less formal in its rules and procedures.

While I have not found information online confirming that You The Jury is an arbitration process, it would make sense considering that it is a courtroom reality show, with an interesting twist. So, go ahead America, text away on April 7, because your verdict is legally binding. *Shudders*