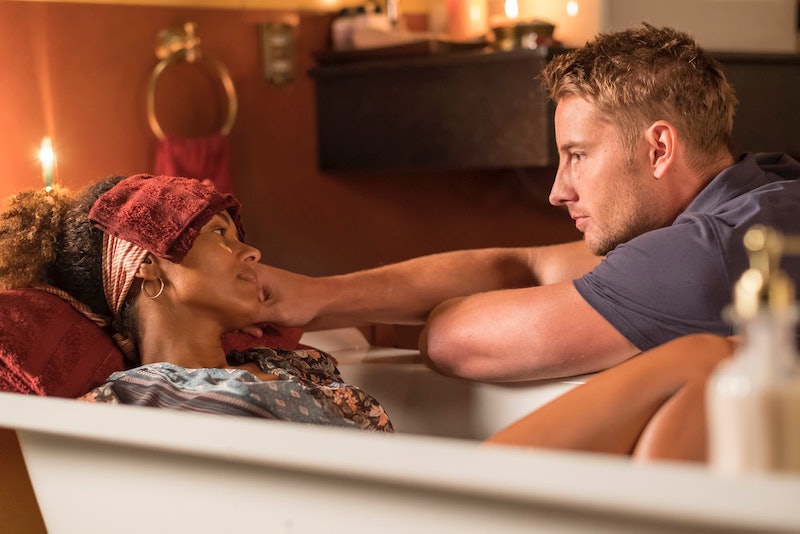 Life is never simple for the Pearson family of This Is Us, but things could be, uh a lot more complicated very, very soon. Now, not every complication is bad, but hasn’t this family had enough surprises? Kevin and Zoe, his girlfriend and Beth’s cousin, are in Vietnam trying to find out more about Jack’s time during the Vietnam War. It's an impossible mission given the lack of information they have, and just when Kevin releases this, Zoe starts to feel nauseas. It had this viewer thinking, at the very least, that Zoe is either pregnant or hiding some illness on This Is Us. Or maybe it was the stress of jumping into something so quickly. It's hard to tell.

Of course, feeling tired and throwing up are symptoms of the first trimester of pregnancy, but they are also symptoms of being in a very hot, very humid foreign country and having a copious amount of jet lag. While we don’t have to jump to conclusions here, Kevin and Zoe have been doing whatever it is they’re doing long enough that a pregnancy could be in the cards. They are healthy adults who are having sex, and sometimes, babies come out of that sex. Of course, it would be complicated, mostly because Zoe seems afraid to open up to Kevin and Kevin doesn’t understand why.

Beth warned Kevin early on that Zoe’s past was complicated, and, in fact, it is. She tells Kevin that her father sexually abused her growing up, and she has done everything she can to forget him and leave him in the past. He keeps trying to contact her, but she’s dealt with it to the point where she even tells Kevin not to tag her in pictures on social media while they’re in Vietnam because her dad lives in China and she doesn’t want him to know they’re on the same continent.

Kevin, who is a human Labrador retriever that loves everyone, doesn’t get it at first — it takes Zoe’s revealing her very tough childhood experiences for Kevin to back off and understand that she doesn't not want him to know about her life. She simply doesn't want to talk about it all the time like he and the rest of his family insists on doing, all the time.

Kevin and Zoe are, in their own words, falling in love with each other, and it took this trip to Vietnam for them to realize it. It took this trip for them to recognize that they have different ways of communicating and start to chip away at the problem. Because if they don't, well, there's no relationship. Still, she wasn't all that clear about why she was randomly so sick, either.

The Pearsons have had a lifetime of bad news, so why not throw something joyful into the mix? But then again, this just be a misleading plot point on the way to finding out something bigger about Jack and his brother Nicky.

You have to admit, Kevin's going to Vietnam to search for — what, exactly? — about his father based on a decades old postcard and snapshot of a tourist necklace was pretty reckless. Maybe that's what made Zoe all of a sudden feel a little stressed and sick to her stomach? Now that she's here, with Kevin, she's in it for a long haul, baby or not.