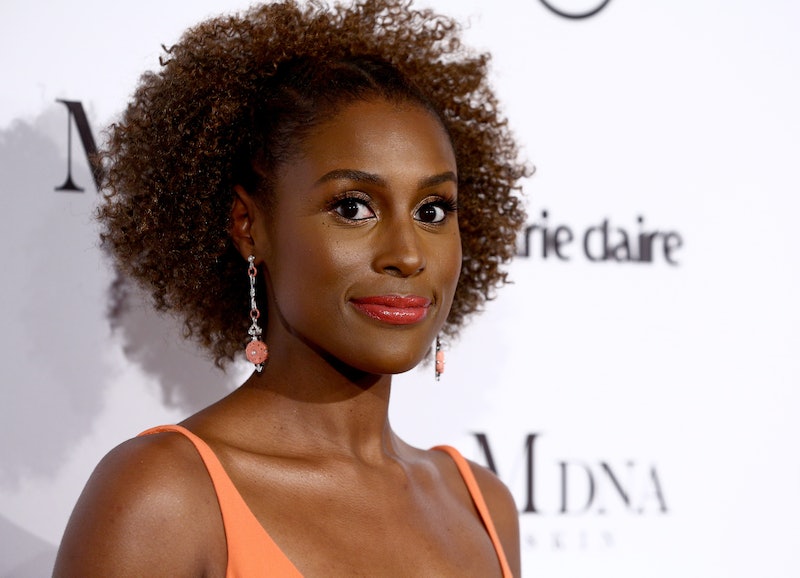 Issa Rae has blessed the world with many of her projects, from her hit TV show Insecure to her hilarious memoir, The Misadventures of Awkward Black Girl. If you’ve followed her career at all, you’ll know her brand is kind of built on being lovably awkward and extremely relatable. Fittingly, the 34-year-old actor revealed in a recent cover story with Women’s Health that being a fitness fanatic isn’t something that comes very naturally to her (stars — they're just like us!). In the interview, Rae discussed her exercise routine and how she learned to incorporate more physical activity into her life.

Describing her relationship with exercise, the actor told Women’s Health she was “a big excuse person” when it came to working out and eating relatively healthy. “I’d have spurts of trying to work out ... Then once I fell off, I’d be like, ‘Well, there’s always next year. Let me make it my New Year’s resolution.’" Rae, who says she was a vegetarian for 15 years, told Women's Health that she sees herself as more “paleo-leaning” these days.

Creating and starring in her own series meant Rae had to learn to prioritize her health amidst a super packed schedule. “Time to work out is so limited, but when I first started seeing myself on TV, I was like, ‘I gotta make time,’” she explained.

Anyone who’s ever tried to get into exercising regularly probably understands how tough it can be to find a routine you like and consistently keep up with it. But the key to sticking to an active lifestyle is finding out what works for you and reminding yourself of the mental and physical benefits. For Rae, this meant waking up at 4:55 a.m. (yes, you read that right) in order to squeeze in some activity before heading to set. It also meant nixing the gym and working out outside instead.

“I exercise for, like, an hour each day. My neighborhood has a bunch of hills, so it’s walking up hills. Then I alternate between walking and jogging. I hate jogging—you’re going in circles, but I recognize that it helps,” Rae said.

In the past, Rae has mentioned her relationship with health, saying she “thrive[s] off fresh starts.” Speaking with Cosmopolitan in July 2018, the actor said, “I want to look my best, be my best, and feel my best.”

Though enjoying these runs hasn’t become second nature to Rae just yet, the mental benefits they offer more than make up for that. She told Women's Health about the time one morning when she was running outside and lost one of her earbuds. “It was dark outside and I couldn’t find it. So I was forced to just be alone with my thoughts, and I was like, ‘Oh, I need to do this more often.’ Those moments are the most creative,” explained Rae. “I think finding those moments while also nurturing your body is important.”

Research has shown that mindfulness (aka, what happens when you're left alone with your thoughts) has myriad mental health benefits. The American Psychological Association (APA) notes that it can help "decrease rumination" and "contribute to effective emotional regulation strategies."

Rae's refreshingly honest attitude towards exercise is something we all could use a little more of. Hopefully, her comments might inspire people to see how helpful being physically active can be.