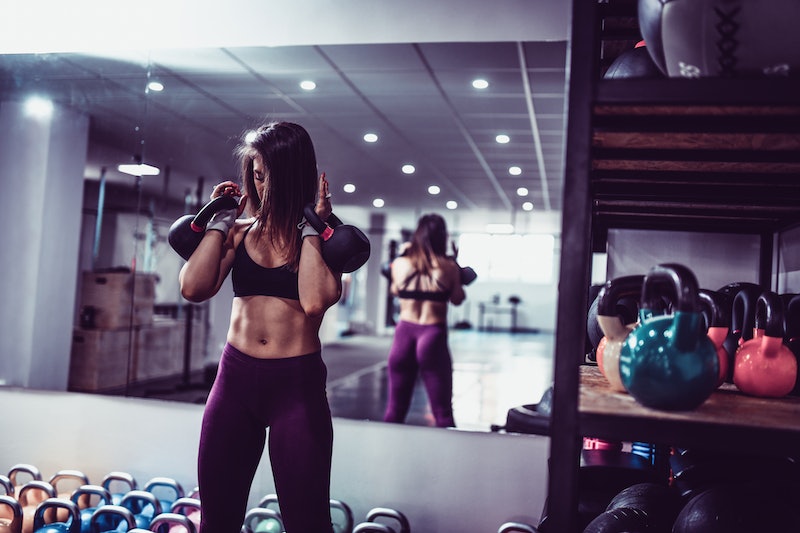 Only a recent convert to the gym, the issue of sexual harassment in fitness spaces hasn't escaped my attention. I see it almost every time I look around. A personal trainer (PT) approaching young woman after young woman offering advice they don't seem interested in receiving. Women leaving a treadmill as a man decides to run next to them, despite countless machines being empty. Even women entering the notoriously intimidating weights area, picking up equipment, and retreating to the safety of an isolated corner is a sign discomfort is in the air.

I tend to visit with my boyfriend, sadly aware that this reduces the chance of unwanted attention. I'm not the only one — Anya, 26, has noticed a stark difference between going to the gym alone and having a male partner alongside. After breaking up with her boyfriend, she has experienced "reoccurring harassment from simple blatant lingering stares and winks to being approached and having men move machines of the same type closer" to her.

The "worst occasion," she says, happened just before Christmas. "I was doing donkey kicks when a guy came over to me and waved his hand in my eye-line. Surprised, I took off my headphones presuming there must be something seriously wrong for him to have stopped me, but then he starts talking to me like it was a completely normal conversation."

After telling Anya she "clearly liked the gym" and was "a distraction," he asked for her number. Even after lying and saying that she had a boyfriend, the man persisted. Eventually, he walked away, Anya says, "though when he sees me now, he still tries to talk to me."

The gym is still seen as "male territory." While some are happy to get on with their workout, others appear to take pleasure in making women feel inferior, whether by physically invading women's space or acting in subtler, more sinister ways. Women regularly change their routine to avoid harassers, sometimes quitting the gym altogether.

Is this a sign that gyms are failing to spot and act upon predatory behaviour? Or an indication the issue is bigger than even they can cope with?

One instructor at 42-year-old Rosie's local gym "was a horrible creep. He would tell me I had a lovely body, come up and adjust my hips while I did exercises without any warning (he wasn’t my PT), and eventually asked if I wanted to go on holiday with him."

Steam rooms and saunas are areas where harassment frequently occurs at gyms. Eimear, 38, was "followed several times into the steam room by the same two guys who stared and stared to the point [she] got up and left." And Ellie* experienced a man "trying to flirt" with her in the sauna. "When I wasn't looking, he poured water over my pubic area," she told me.

Even classes aren't off-limits to harassment. In a boxing class, 33-year-old Sophie was mansplained to by a fellow participant. The man later said: "I bet you just have to look at your boyfriend and he does what you want. You dominate him, don’t you?" When paired with him to do exercises, he told her: "I've been excited for this. Make me your little bitch."

"I was annoyed [the man] felt he was able to sexualise me when I don't go into that environment for sexual attention," Sophie says.

"My heart always sank when he came in."

A recent survey of 1,438 women by GolfSupport found 78% were scared of being harassed at the gym, with one in three preferring to exercise in a female-only space. Similar research conducted by FitRated in 2019 found almost three-quarters of the 890 women they surveyed had experienced an uncomfortable interaction at the gym. Unsurprisingly, nearly 90% of respondents weren't a fan of being stared at or flirted with while exercising. And almost 80% didn't enjoy being spoken to.

Everyone I spoke to who had experienced harassment at the gym altered their behaviour because of it. Rosie tried to work out the instructor's schedule to avoid him; "my heart always sank when he came in," she says. When Anya sees the man who harassed her trying to make eye contact, she heads straight to the running machine. Ellie no longer uses the sauna, and Eimear stopped using the steam room. In the gym, she chooses a machine "far away" from the men who made her feel uncomfortable — even checking they weren't leaving alongside her as she was "scared" of taking the ill-lit walk to the tube "with them around."

Their decisions are in line with the women surveyed by FitRated. Over half of women who'd been harassed began to avoid parts of their gym, over 41% decided to spend less time there, and almost two in three exercised somewhere else. More than one in five said gym harassment caused a "moderate to extreme impact on their fitness goals."

The solution seems simple, right? Report an incident to staff, see that your harasser is reprimanded, and carry on as normal? Not quite. In a BBC report, two women explained how staff shrugged it off, making comments suggesting the women should expect, and were lucky to receive, the attention. One call to a head office resulted in an apology, a refund, and an admission there wasn't much the company could do with so little evidence.

Dr. Aishah Iqbal, a personal trainer and paediatric doctor, says it can be difficult to report incidents. "You have to be honest and admit something uncomfortable has happened to you, which requires revisiting the event," she tells Bustle. "Not everyone is confident in doing this and if it is dealt with poorly by staff members, it could really hinder how likely others [are to speak] up."

Some of these factors contributed to Rosie and Anya feeling unable to report. "He was the single trainer in a shared gym," Rosie explains. "I could potentially have made training harder for the residents who used him as their PT, and there was no obvious place to report him to." Meanwhile, Anya says that "it's hard to prove unless you're in the moment" and adds, "If I [did] report it, the security would just laugh it off and tell me to take it as a compliment."

For Sophie, however, it wasn't the response of the gym's staff that was most concerning. "Men who are reported for these things either get very defensive or deny that it happened," she notes. "I’d rather deal with a creepy guy than an angry guy." She is confident the boxing incident would have been handled "appropriately" if she had reported it.

The majority of gyms have strict rules prohibiting any kind of harassment. A spokesperson for Virgin Active told Bustle "all members must conduct themselves in an appropriate manner that does not disturb the enjoyment or impair the use of that club for other members. Any breach of this may result in a termination of membership."

They said all complaints are dealt with "quickly and firmly" by a safeguarding team, adding: "Where appropriate, we will also work alongside the police and support any members through the reporting process if they wish us to."

Similarly, a Nuffield Health spokesperson said the company does "not not tolerate any form of harassment in our fitness and wellbeing clubs. As a CIMSPA partner, all of our PTs are members and expected to adhere to their code of conduct as well as our own. Any reports of harassment are taken extremely seriously and are investigated to determine the appropriate action."

PureGym — a company with several 24-hour gyms — has a firm code of conduct and guides staff on how to deal with harassment complaints, which includes immediately passing them to senior staff outside of the gym. Blanket CCTV coverage aids any investigations and people found to be behaving inappropriately will have their memberships terminated.

However, the stats and the experiences of the women I spoke to suggest rules are broken regularly with few consequences. Ellie — who has worked in the leisure industry for years — says gyms face certain restrictions in dealing with sexual harassment. When she reported the sauna incident to staff, the man was thrown out, but a lack of CCTV meant he "couldn't be banned and the police couldn't do anything about it."

"As a cover duty manager, I'm highly aware of the need to trust women when they say they have been harassed in some way," she states, "but we're also fairly limited in what we can do. Many of the spaces where women tend to get harassed in sports centres, we cannot put cameras in because people consider it an invasion of privacy. So we end up not being able to do much about it."

Lawyers told the BBC harassment is a criminal offence "if a pattern of behaviour can be proved." (Inappropriate touching is classed as assault.) Gyms, however, are only liable for incidents committed by staff, not members.

So what can be done? Some gyms are making changes. PureGym, for example, has introduced female-only areas in some locations and is redesigning gym layouts by adding extra lighting and removing barriers and walls that block visibility.

Meanwhile, Iqbal identifies Client-PT relationships as places "boundaries of professionalism can become blurred." She suggests that in order to help keep any ambiguity to a minimum, PTs "should make it clear if they are ever about to touch a client." She also notes that it's important to "recognise the social boundaries of making jokes around [things like] glute size or clothing," as "what one client might deem as appropriate, someone else may not. It is always safer to err on the side of caution."

Culturally though, something has to change. Perhaps mandatory member inductions which clearly define what is and isn't considered appropriate behaviour might help. Zero-tolerance policies could also be implemented across the board. And staff in all gyms could receive better training to help them act in a proactive manner, rather than just reacting to post-incident reports. Put simply, women shouldn't be shouldering the burden of dealing with harassment.

Sadly, some gym-going men still aren't clear on what constitutes harassment and why it's a no-go. While harassment is admittedly a wider societal issue, the environments in which it festers have the power and responsibility to make an immediate difference. The sooner those places begin to understand that, the better.

*Name has been changed to protect identity