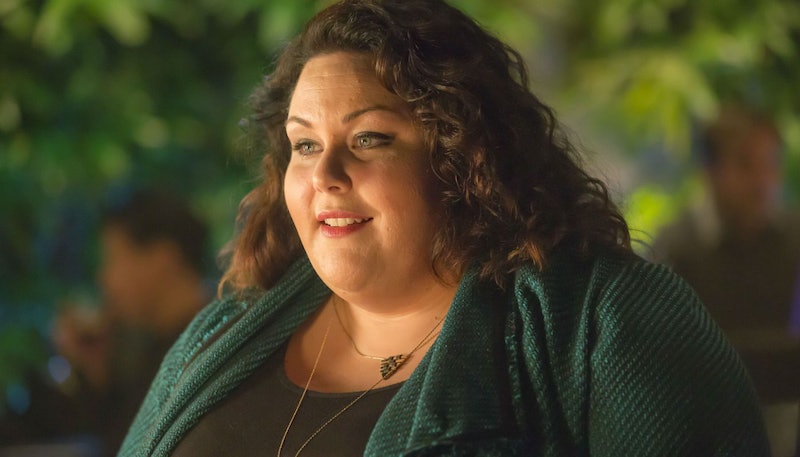 When promos for NBC's original series This Is Us began airing in late 2016, I couldn't help but feel incredibly optimistic about Chrissy Metz's role as Kate. A total rarity, she was a visibly plus size actor in a leading part. I began wondering what her script might be like while desperately hoping that her fatness would not be a focal plot point, that she would not be the butt of everyone else's jokes, and that she'd be allowed to be more than a sidekick to a far more conventionally attractive co-star.

Metz is an incredibly skilled actor and Kate has some highly redeemable qualities (the kind that are unfortunately uncommon of fat fictional characters). Nonetheless, Kate ended up feeling like a prime example of why the humanization of fat characters on screen is no longer enough.

This Is Us undoubtedly succeeds in that Kate is far more relatable than so many plus size film and television characters to come before her. She is close to her family, while simultaneously not having the "perfect" family life. She is capable, clever, witty, and financially independent. We know she is sexually active and she has some excellent little black dresses in her wardrobe rotation.

Like so many fat people IRL, she has also been mistreated for her weight for decades: Bullied by peers, passerby, and fellow flight-goers alike. Childhood flashbacks reveal a well-intentioned but arguably still misguided mother attempting to keep Kate's weight "in check;" banning sugary cereals from Kate's breakfast repertoire while allowing her slender brothers to eat as much of it as they please.

The principal focus of her narrative, however, is unfortunately her weight: Her self-hatred, her self-condemnation, her desire to shrink, and her struggle over whether to undergo bariatric surgery in order to do so. Her character has no health issues that we know of (not that weight loss surgery is a cure-all to every health issue out there in the first place). She just wants to be smaller.

When fat characters appear in films and on television, chances are they will be assigned one of a limited set of profiles. Perhaps they'll be the clumsy or dim-witted buffoon, á la Homer Simpson, most of Jonah Hill's early roles, or Rebel Wilson's Brynn in Bridesmaids. Maybe they'll be the villains: Their bodies seemingly serving as metaphors for their utmost greed and deplorability. Think Ursula or the Harry Potter series' Uncle Vernon, Dudley, and Dolores Umbridge. It's possible that they'll serve as the comic relief, like Melissa McCarthy's Mullins in The Heat or Pitch Perfect's Fat Amy. Then there's the occasional profoundly abusive parent like Mo'Nique's Mary in Precious, or a headless fatty existing for no other reason than to be shamed.

But they'll also pop up as the sad fatties: Characters who hate their bodies, constantly strive to shrink themselves, and truly believe that life can only be lived fully with a slender figure. These are the designated fat friends, the perpetual dieters, and the ones who are not allowed to exist free of the burdens of self-loathing. They are the Rachel Earls, the Molly Flynns, the Kate Pearsons.

There is arguably nothing inherently wrong with such a character. Self-hatred and self-doubt exist on all ends of the size spectrum and channelling that through a relatable, fictional role is undoubtedly important. But when this is one of the very few ways cinema and television are presenting us with fat characters, the idea that all fat people are or should be defined by their woes continues to be propagated. Any humanization of the character is shadowed by the main message that "Your body is wrong," or "your body is/should be cause for misery," or "you will not be happy until you change."

In conversations with fellow fat positive influencers and individuals, it quickly becomes clear that I am not the only plus size person yearning for more from my on-screen representation. There are endless possibilities for the roles fat actors can play.

In the real world, fat people are not limited to the roles of sidekick, nerd, villain, or loner. Sure, many of us struggle on the quest for self-love. It's hard not to when your body is vilified so intensely — if not by those immidiately around you then by the messaging you're receiving from TV or magazines or fitness ads or your healthcare provider. But most of us are out here living our lives nonetheless. We make love, we make art, we make noise. We form relationships, we participate in sports, we smash it at school and at work, we run businesses. We have families. We are fashionable. We are radical. Some of us rarely think of our bodies at all. Some of us actively think about how much we love them; revel in them. As individuals, we are no less complicated, nuanced, skilled, or talented than anyone else.

It's time that our fictional narratives begin representing all of this. It's time that we get to see fat people on screen who either actively love their bodies or who pay very little mind to their bodies at all. Humanization in the form of a set of redeemable qualities alongside a weight loss journey is no longer enough. It does nothing to challenge preconceptions surrounding fatness. It does nothing political. It does nothing to create positive influence or change. It just feeds harmful rhetoric: The kind that insists fat people cannot live full, free, brilliant lives until they lose the weight. It's a disservice to all the people proving this kind of BS wrong, day in and day out.

That's why I'll be waiting to see what happens to Kate in This Is Us Season 2. Maybe she will get weight loss surgery, only to realize that a smaller pant size does not equate to instant happiness. Maybe she'll realize she's still the same person. Maybe the show will use this as an opportunity to discuss how such procedures can negatively impact the health and wellness of those who undergo them. Maybe there'll be some necessary critique of the institutions and mentalities that lead so many people to believe that their bodies are flawed and broken and ugly.

As for characters elsewhere, well, I'll be waiting for them too. For my fat sex symbols and fat heroines; my fat superheroes whose bodies are entirely irrelevant to their powers; my fat geniuses; the stories that echo the countless inspiring, badass narratives of the fat people I know. The kind of fat people who are everywhere, and who we need to see more of.