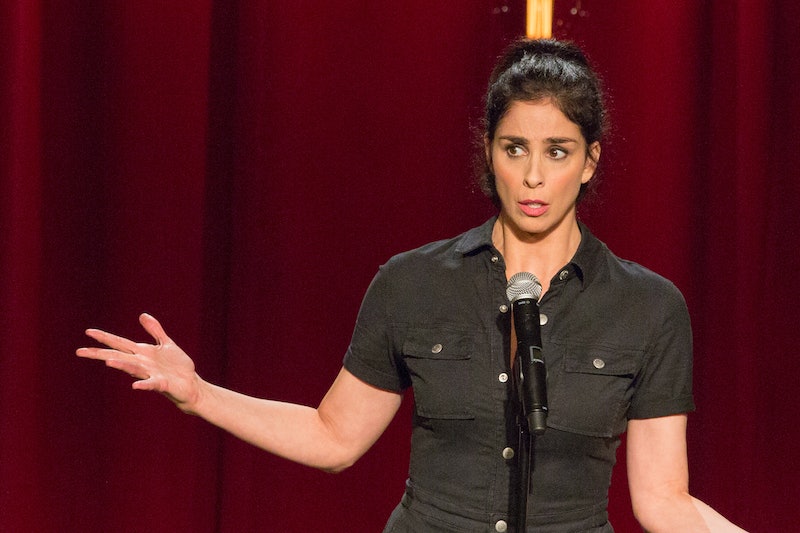 Comedian Sarah Silverman is never one to hold back when it comes to sharing her opinions regarding politics, among other things. Her candor is one of the reasons fans love her. But, as she points out in her new standup special, it also makes her a target for violent threats. As she kicks off her new Netflix special, A Speck of Dust Silverman jokingly apologizes for the additional security at the show. Although the comic delivers the bit in her signature, deadpan manner, she makes a depressingly relevant point. It's not just stars like Silverman who have to deal with abuse and death threats; online harassment is to be expected, especially by women.

Entertainers, journalists, and other public figures who dare voice their political opinions are seemingly held to a higher standard than the President Of The United States. Donald Trump was elected after appearing to suggest his supporters shoot Hillary Clinton. One of the most popular chants at his rallies was "hang that b*tch," and he has never seemed to make a real attempt to mute this rhetoric.

But, a comedian — especially a female comedian — joking about a military coup on Twitter is considered to be "crossing the line." In A Speck Of Dusk, Silverman said:

"I'm sorry about the metal detectors. That is my bad. I tweeted something and it made some people feel the need to express, um, wanting to kill me. And I'm sorry I called for a military coup. I knew it was a long shot. You know when you're a comedian now, you really have to think things through. Before you post them, you know, on Twitter. Who do we think we are, presidents?"

Of course, this is is a standup special and comedians sometimes stretch the truth in order to make a joke pack a bigger punch. But, when it came to this particular joke, Silverman wasn't exaggerating. The comedian confirmed to The Hollywood Reporter that she now has metal detectors at all her gigs due to the sheer amount of threats she's received due to her social media posts. She told THR:

"I'm not even that aware of it because I don't look at my mentions much or anything; I don't really understand Facebook — I got, I guess, some threats and calls to my manager's office and stuff and that made it so that they said you have to get metal detectors and security. I'm not Britney Spears. I have to pay for myself, so it really cuts into — but I mean I'd rather be alive. They had to have metal detectors at all my gigs and it was a little ridiculous. People get very angry. I'm not everybody's cup of tea."

This problem isn't unique to Silverman — women who voice strong opinions frequently find themselves the targets of death and rape threats. An in-depth analysis conducted by The Guardian found that, out of their top 10 writers who receive the most abuse, eight are women — four white and four non-white. The other two are black men.

Unfortunately, it seems like being an opinionated woman with a platform means that harassment and death threats are par for the course. Everyone is free to disagree on political issues — and, shockingly enough, no one is forcing you to watch comedy that you don't enjoy or read the work of journalists you don't like.

But it should be horrifying to everyone, regardless of political affiliation, that any individual is subjected to death threats simply for doing their job or voicing their opinions. And that includes outspoken comedians like Sarah Silverman.