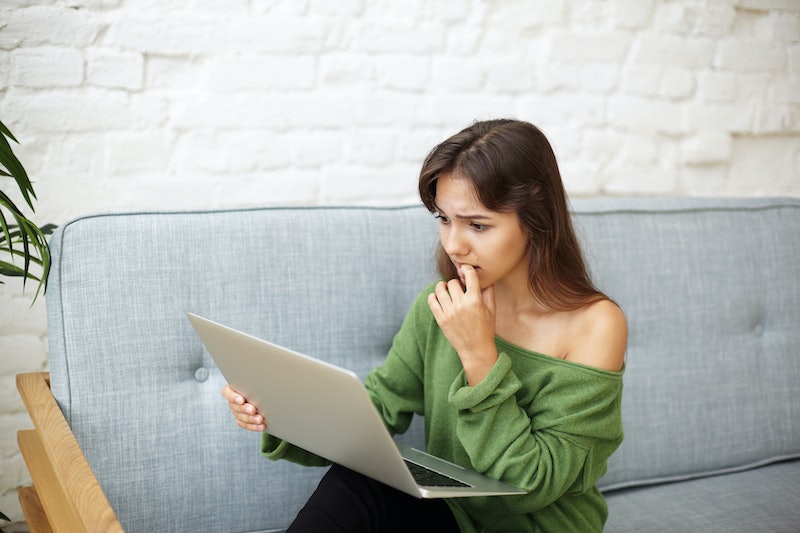 One of the most troubling effects of societal misogyny is that it's so widespread, women can get accustomed to it. A case in point: A new survey of 1,000 Australian women by the digital security firm Norton has found that over three quarters of women under 30 have been harassed online. Perhaps nowhere is the objectification and degradation of women more normalized than it is on the Internet, and these findings are a sobering reminder that our ethical standards and our attitudes toward women have not advanced along with our technology.

The age difference could be due to overall differences in Internet usage: According to Pew Research, 97 percent of Americans ages 18 to 29 use the Internet; usage decreases with age, however, with only 57 percent of those 65 and over using the web.

Norton also asked which gender experiences more trolling, and though the data hasn't been released yet, the firm told The Guardian that they've found women are twice as likely as men to receive threats of death and sexual violence. In addition, one in four LGBTQ people who has been the target of online harassment was bullied for their sexual orientation.

Online harassment directed toward women is a reflection of the harassment women face in everyday life. The Internet may provide a forum where this type of treatment slides by, but it's also important to acknowledge misogyny as the root of these attacks. Threats, stalking, and bullying are considered unacceptable in real life, and our ethics and laws should evolve to address them online. These incidents may be commonplace, but we must resist the urge to view them as inevitable.

More like this
25 Inspiring Quotes From Black Women To Celebrate Black History Month
By Kyli Rodriguez-Cayro and JR Thorpe
11 Super Bowl Instagram Captions To Use On Game Day — Even If You Don’t Like Sports
By Alexis Morillo
Ashamed Of Your Screen Time Stats? Here's How To Change That
By Alexis Morillo
24 History-Making Black Women You Probably Didn't Learn About In School
By Ayana Lage and JR Thorpe
Get Even More From Bustle — Sign Up For The Newsletter
From hair trends to relationship advice, our daily newsletter has everything you need to sound like a person who’s on TikTok, even if you aren’t.